Welcome back to Billy Beer’s Barstool. Today we are off to Houston to attend Comicpalooza and see The Mother of Dragons along with her headless companion Missandei. Emilia is doing her fist non-SDCC Con (and who knows how many more she will do), so I had to take advantage of the opportunity since she’s recently been very hard to get.

Thing started off crazy before I even left LA. While I am getting ready to board, I look up and there’s Emilia right in front of me. ARE YOU KIDDING! She was talking to someone so I didn’t want to interrupt and waited for her to stop her conversation. I politely say “Emilia” twice only to get ignored, and then they called her boarding zone. Oh well, maybe when we get off the flight.

Well let’s just say that didn’t go very well either. With only three of us there, I asked if it was OK to get a picture and she again ignored us and even turned her back. Then her helpers talked to her and then told us she’s not doing anything. Oh well, I mean I did just pay a lot of money for the Con. At least that stuff is a sure thing.

After a fun night of enjoying the town, it was now time to head into Comicpalooza. 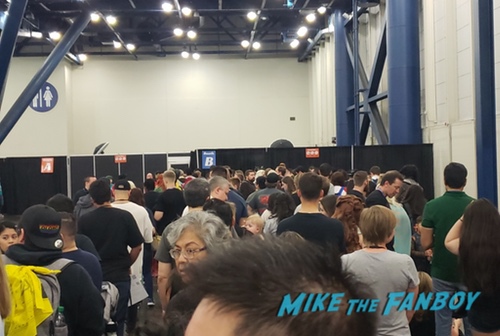 The first thing up for me was the photo-op. When I finally got up there, we went through ANOTHER medal detector and were told no props or poses. So basically, everyone’s picture is going to look the same. 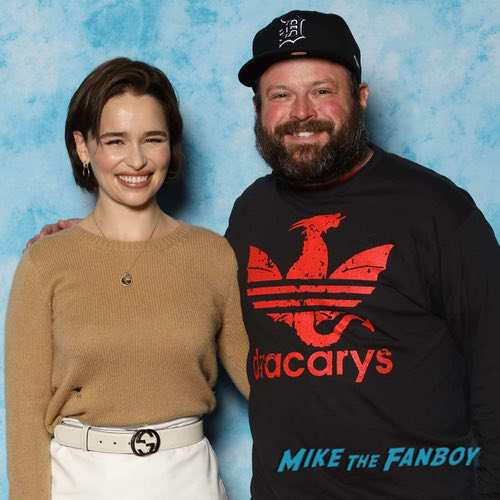 Next up was the Emilia Autographs. A lot of people didn’t know what to expect. You were only allowed to bring up 3 things at a time. I actually bought 9 tickets. Luckily my friend had some helpers that were able to make it so I only had to go through once. Again, they had us go through a medal detector. We were only allowed to bring in what we planned on getting signed. Also, she would not sign in blue.

Now the 3 things I brought for myself to get signed were a sext Esquire photo, and GOT photo and a screen worn outfit from “Me before You”. The first thing she grabbed was the sexy photo. I asked her to make it out to Billy, which she did. Then the next item was the GOT photo which she signed really nice. Finally I gave her the skirt to sign. She kinda rushed signing that, then I was on my way. It all happened really quick, but I was happy with my signatures. 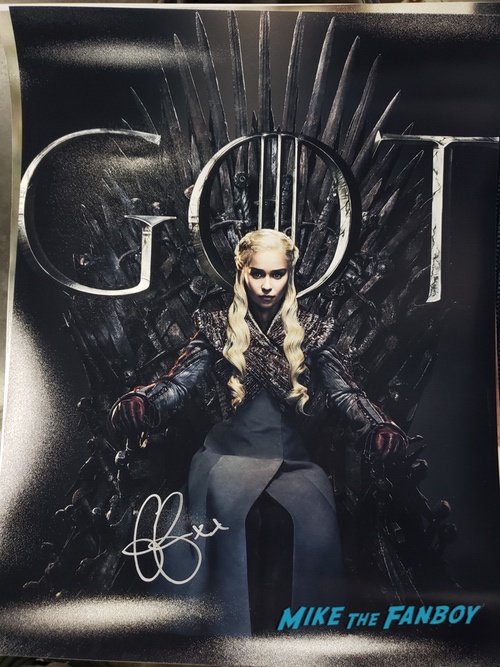 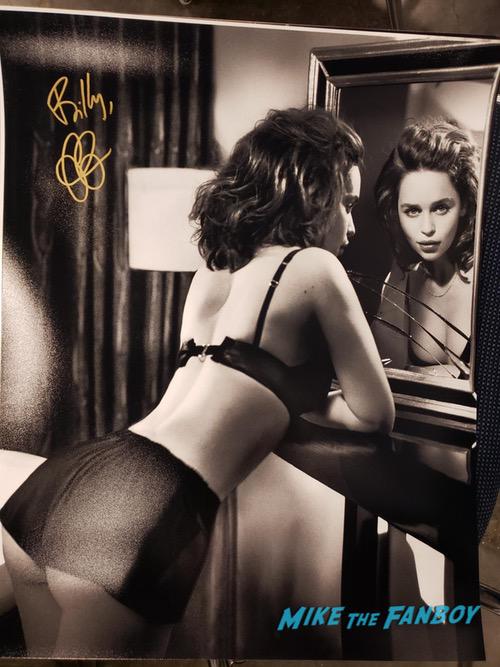 After a few minutes, the helpers came back with my cards and other photos I brought to get signed. Then I heard she wouldn’t sign the sexy photos anymore, and mine was the only one she signed. Don’t know how I got lucky. Earlier she wasn’t signing inscriptions, but after me, she started to do them. I saw a lot of great items signed. 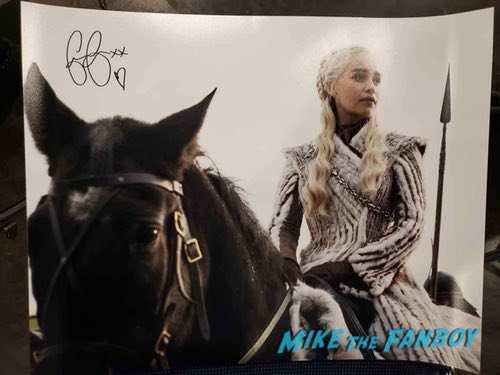 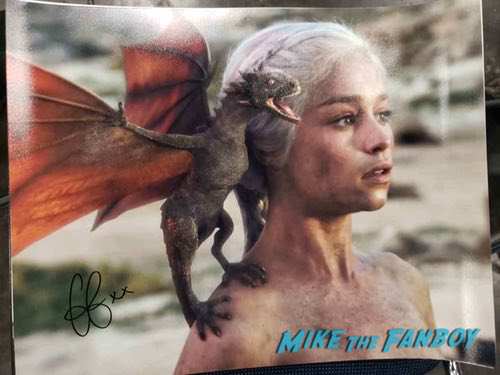 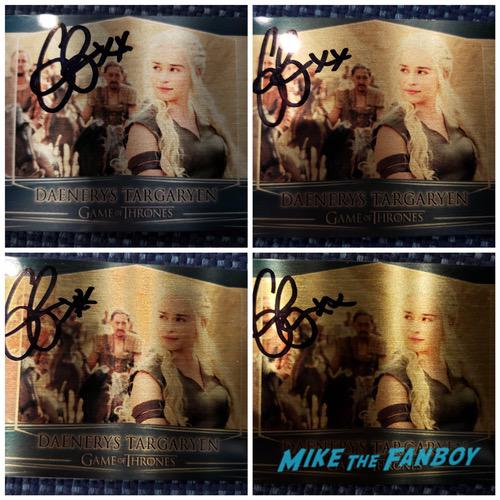 Now I had to run over to Nathalie’s line to get a few things signed. That line was shorter but moved a little slower cause she was taking her time with her fans. When I finally got up there, I added on the photo-op which was cheaper than the professional one. I had a picture from the most recent episode and told her she must have signed this photo a bunch today. She then told me it was actually the first time she ever signed the picture. I thought that was kinda cool. then she signed my card and took a nice picture. 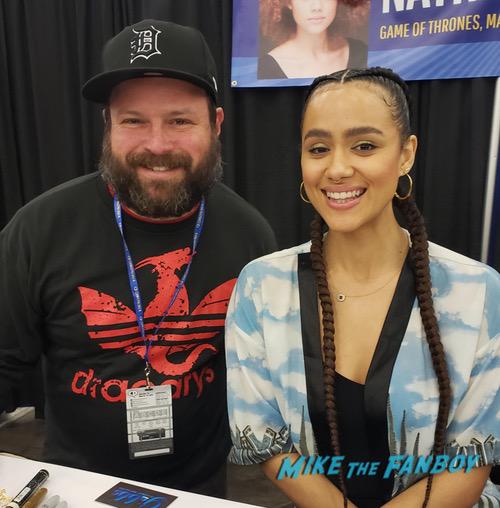 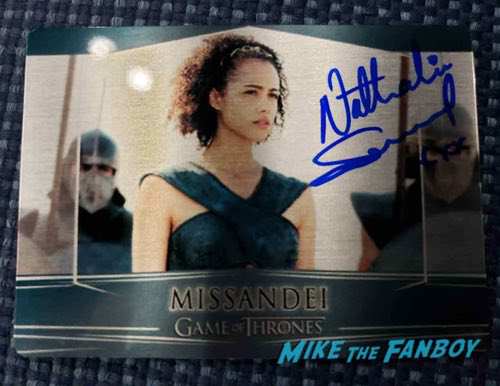 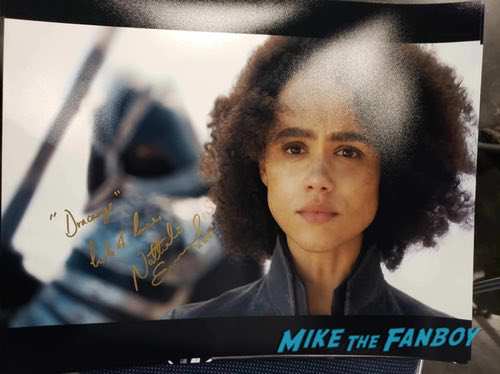 There are so many little things I’m probably leaving out and names of friends that were there that made the trip a lot of fun, but Mike just wants to hear about the graphs. Till next time!