I was so sad when I heard that John Hurt had passed away. I’ve been a fan of his for a long time. Alien is one of my favorite films of all time, but he’s also been in The Elephant Man, Harry Potter, and so many other classics like V For Vendetta!

I was lucky enough to meet John Hurt, who was such a sweet and humble man. Scotty and I went to a play he was in back in 2012 and he couldn’t have been nicer.

I have to tell you, there are acting legends and then there are stars. You know, to me some of the best actors are character actors. They are just so interesting and always play such interested characters.

I’ve been a huge fan of John hurt’s for so long. For those of you who don’t know, John Hurt was in the original Alien… In fact, he was the first person to ever “birth” an alien on screen. John Hurt was also in V For Vendetta, Harry Potter, Hellboy, Contact, Rob Roy, The Elephant Man and more…

John Hurt was doing a rare one man show in the bowels of Culver City. So, armed with my Alien mini poster, my V For Vendetta poster and an art photo, I braved the cold, dark, mean streets of Culver City along with Liz, Gregg, and Scotty. Liz met John Hurt a couple days ago and said he was super nice. Like over the top nice. I’m hoping that’s the same today! LOL…

After a quick stop at Baja Fresh.. I mean, how can you meet a living legend on an empty stomach? And what better to fill a stomach than Baja Fresh? I should be getting kickbacks from Baja Fresh.. LOL…

We headed over to the theater. Scotty was there already and we looked around for a spot to wait. Or thee spot I should say.

Also on this Goonie adventure was MTF reader and all around awesome guy Michael who ironically just sent me a facebook message about this very theater. He’s here with his wife. I aways appreciate those with great taste in actors! Appreciating the truly great actors is something that gets lost on people and fans nowadays.

Gregg is on the side and someone from the theater comes out and asks if w are waiting for John. Gregg says yes, and then he tells us exactly where to stand. You don’t get that everyday.

Sure enough about 10 minutes later out comes John Hurt smoking. He comes right on over to greet all of us. Honestly, he is such a nice man! 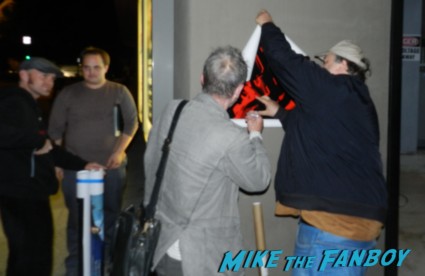 I was a little taken aback about how kind he was. He would just sign everything and everything put in front of him. John signed my V For Vendetta mini poster and then my Alien mini poster as well. 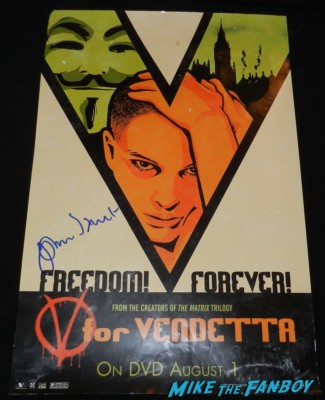 He then signed my photo and said, “I’ve never seen this photo!” It’s a pretty famous photo, so I’m a tad surprised. 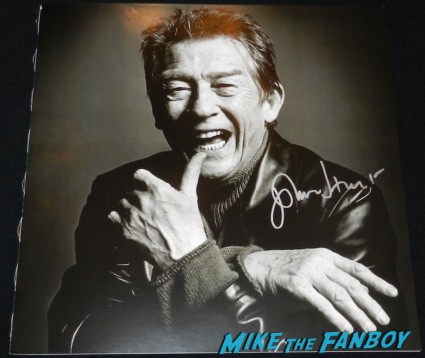 John Hurt was so nice! He signed Michael’s figure as well. Then he did photos with everyone. I mean seriously, one of the absolute nicest people I have ever met. 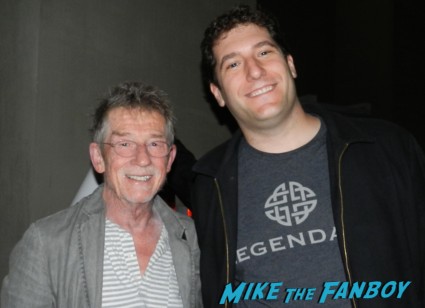 There really needs to be more evenings like this. It was calm, it was fun and most of all it was a great memory of meeting an acting legend!

Plus, hanging with awesome people is pretty cool too! 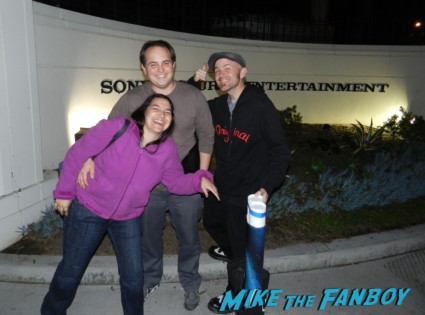 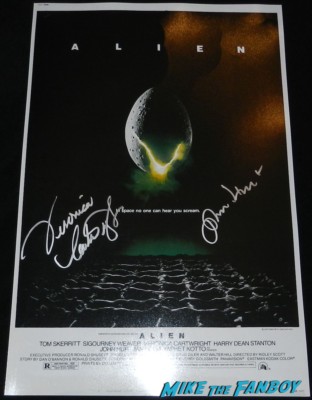