I love November in Los Angeles… Generally, it’s crisp, not cold… And it’s perfect jacket weather, but not arctic tundra weather. Whoo Hoo! I decided to head out to try and meet one Mr. Eric Bana. And while Pinky keeps trying to convince me The Time Traveler’s Wife was a good film… (It’s Not) I’m still a fan.

I’ve met Eric before and he’s always been super nice, I know he doesn’t like dealers though. Eric is out and about on a talk show along with Homeland star Damian Lewis. I’d like to get both so I’m crossing my fingers.

7:18 p.m. – Pinky is knitting a blanket… I’m suspecting it’s for Sam Trammell even though she’s trying to convince me it’s for her nieces. Yeah, right Pinky! I know the truth! I CAN handle the truth (really I can’t… shhhhhh)!

7:21 p.m. – Lucas just grabbed Pinky’s blanket and is wearing it like a pashmina. He said I couldn’t use the photo though… Doh!

7:35 p.m. – I just realized that Pinky’s blanket is the same color as the Mike The Fanboy logo! Talk about random.

7:46 p.m. – Oh gosh, there’s a mad scramble to get in the barricade. CB held me a spot and everyone piled on in on the drop of a dime. Damn.

7:52 p.m. – There’s Damian Lewis. Everyone calls out for him. He looks over and then talks to a security guard. They talk for a second and then Damian Lewis disses… Wow! I kept hearing how nice he was. Man, that’s a bummer.

7:54 p.m. – Bummed… I have a feeling though that one security guard told Damian Lewis to not come over. It’s a hunch. If that’s the case, that’s pretty dicky Mr. Security guard!

8:03 p.m. – There’s Eric Bana! We all yell for him and that same security guard grabs him again. They talk for a second, and then Eric Bana comes right over! So nice!

He starts on one end and just keeps coming down. He is taking his time with everyone.

I love it when people are so cool! Eric is signing everything put in front of him.

He signs my Chopper DVD and I ask him to personalize it to Scott. 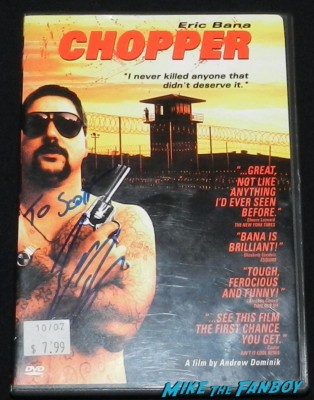 He sees the GQ magazine and is like, “WOW! Now that’s an old one!” I was like, “Yeah, I’ve had this for a while!” When I thought of it, that magazine is almost a decade old! Damn…

Eric continues down the line taking photos, signing… Very cool. Pinky gets her photo with him which clearly makes her very happy. Awesome!

So glad I decided to head out! Eric Bana is awesome! The last time I met him he was super nice and this time was no exception. It’s too bad about Damian Lewis but you win some and lose some! Doh! 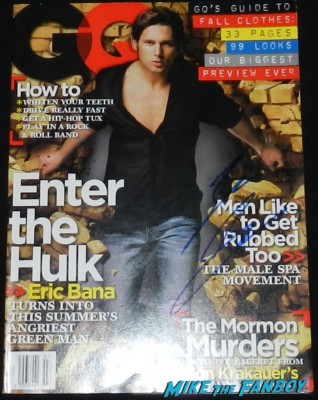