Home / Derek • Reviews / Humans Season 2 Episode 2 Review! Derek Says, “There’s so much going on and it’s all so amazing!” 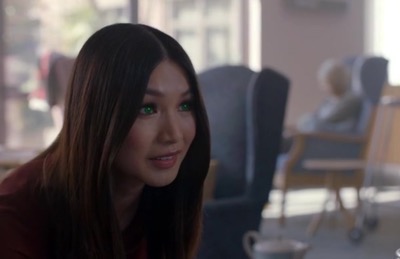 In the second episode they waste no time in escalating the situation between the synths and the humans as Leo and Max decide what to do with the one man they took prisoner as they were escaping away with Hester. They tie him up and are trying to get information but he’s not being very helpful. So when she gets a moment alone Hester takes matters into her hands and starts torturing the man until she gets some useful info out of him. He reveals that there’s a place called the Silo where many of the synths are being kept locked up. So Leo decides they need to take action and free their brothers and sisters. But when he presents this information to Mia she tells him that it’s unwise because what are they going to do with the other synths once they get them? Leo wants to take them in like his children and take care of them but Mia reminds him that they are barely learning how to live  their lives as well so how can they properly take care of them? It makes sense what she’s saying but at the same time it has to be too difficult for Leo knowing that there are other synths that are scared and confused. His heart is definitely winning over his head in this situation. While Leo and Max just want to help Hester is taking the immediate dark turn with her new found emotions and just wants revenge on those trying to hurt them. After Leo fills sympathy for their prisoner he lets the man go but unfortunately he doesn’t get far. Hester tracks him down and murders him with but barely a thought. Wondering if she’s even going to tell Leo and Max? Plus what happens when the man’s body is discovered and they realize the synths are up to killing them? The stakes have been very raised. 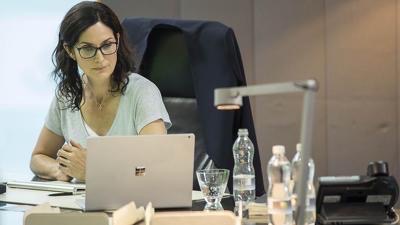 Back over in the states Dr. Morrow is opening up one of the conscious synths and trying to figure out how their new found awareness has happened. In an effort to further her own research she tries to transfer her own AI’s brain “V” into the synth to give her a body but it goes terribly wrong and is rejected by the host. Frustrated by the situation she looks into more background on the synths and she comes across Prof. Edwin Hobb and she feels he might able to help her. Well anyone that watched Season 1 knows this guy is a big problem and has a chance of bringing nothing but bad news. She tells Milo that she is going overseas to find him but also finds a reason to criticize him for being a greedy businessman and just wanting to figure out the tech to make money when he should be using his resources to help mankind.He tells her that she is all wrong and he has very good intentions. My whole thing is why doesn’t she just keep to her work and just be glad he brought her on for this? Be grateful for the opportunity she is being given instead of crapping all over the guy?! Being a complete jerk to him is not the best way to help further her ideals. 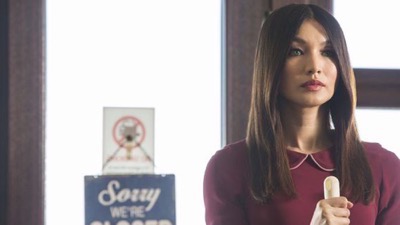 When we left off at the end of the last episode Niska was deciding to turn herself in to the police. After Laura goes to the CPS (whatever that is) to talk to them about the small, but possible way she could get a trial with the same rights as a human she decides to submit herself to incarceration. The government will do tests on her and if they feel she is indeed conscious they will give  her a fair trial. If not, she is to be terminated. Pretty crazy odds but Niska decides it’s worth it to her because she wants to help pave the way for her future synths that are now awakening from the coding to have basic human rights. Niska is such a fascinating character that you can’t help but get behind her in this crusade she has taken upon herself. She took the code, uploaded it, and now might be either destroyed or imprisoned for her other actions. ALL in the hope of helping out her fellow kind. Emily Berrington is doing such an outstanding job showing her character’s selfless strength and determination. 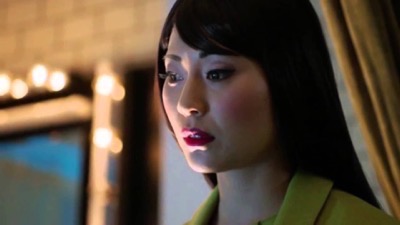 While Laura is dealing with Niska it’s giving her daughter Maddie (Lucy Carless) free time to go on her own mission. She does research on one of the creators of the synths George Millican (William Hurt from last season) an decides to go out and get one for herself. She finds a synth junkyard and purposely asks for an older model. Not sure at all the rationale behind any of these decisions but the good thing is she rescues Odi (William Tudor) and fixes him up enough to bring him back to functioning life. Well he is all bent out of shape and can’t speak but it’s a start! She lies to her parents and tells them it’s an assignment for school but we know she’s all sorts of full of it.
Rounding out the rest it seems Mia is getting WAY too close to her employer Ed (Sam Palladio) by messing with bank records and helping him get a loan plus making a trip to see his sick mother in her nursing home. Her persistence in trying to find a human family comes back to bite her as an already suspicious Ed confronts her about the bank loan and after a random accident realizes their is something not right about his synth. The synth therapist seems to be doing some good for Joe and Laura as they are beginning to gain some ground towards becoming a happy couple again. Plus we have the return of Pete (Neil Maskell) and his synth partner /lover Karen (Ruth Bradley) who are now a couple living together as they continue to keep her secret about not being real from the police force.
There’s so much going on and it’s all so amazing! And it’s only been two episodes!
Share on Facebook