Home / JM • Movie Reviews • Reviews / In A World… Movie Review! JM Says Lake Bell Is One Of The Sharpest Comedic Minds Of This Generation!

Hey guys, as promised here’s JM’s review of In A World… The new Lake Bell film… That coincidentally, we are holding a contest for as well. So enter and win a hand signed movie poster by the star of the film… Yep, Lake Bell!

JM loved the movie and raves about how great it is, but don’t take my word for it… Take his!

One voice. One performance. Lake Bell provided an interesting insight into the voice-over profession by focusing on three iconic words, “In a world.” Feature film directorial debuts are always interesting to recognize, but Bell wrote one of the most spellbinding scripts of the year and arguably the most balanced comedy with “In A World.”

Carol Solomon (Bell) is the daughter of the king of voice-overs, Sam Soto (Fred Melamed), who is regarded as the second greatest announcer after Don LaFontaine (he coined the legendary “In a world” phrase) and remains a prominent figure within the voice-over industry. Carol constantly struggles with being overshadowed by her father’s legendary career and barely makes a living as a vocal coach. One day, Sam kicks Carol out so he can live with his barely thirtysomething girlfriend, which forces Carol to move in with her sister Dani (Michaela Watkins) and boyfriend Moe (Rob Corddry). Despite her living situation changing dramatically overnight, Carol goes about her day and assists Eva Longoria to acquire a proper accent for a dubbing session.

Awkward audio engineer Louis (Demetri Martin) runs the recording studio and has a huge crush on Carol, but can’t find a way to ask her out. When Gustav Warner (Ken Marino) misses a recording session, Louis speaks highly of Carol to his colleague Heners (Nick Offerman) and she steps in to save the day. Suddenly, Carol starts receiving more offers and becomes the toast of the town, infuriating the male dominated industry. Most of them can’t believe an “unknown” is “stealing” their jobs, but no one is more surprised than Sam and Gustav. Soon rumors start circulating Hollywood executives want to resurrect the immortal “In a world” with Gustav and Sam as the frontrunners, but can Carol prove she’s the “Voice” everyone really wants? 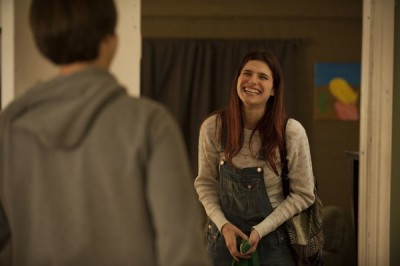 You’ve heard the phrase countless times while watching thousands of trailers, but have you ever wondered who possessed that commanding voice? Don LaFontaine revolutionized the voice-over world with his signature catchphrase and inspired countless people to mimic his signature sound, including yours truly. Inspired by the lack of notable female voice-over talent for trailers (with the exception of Melissa Disney for “Gone In 60 Seconds”), Lake Bell conceived a riveting story showcasing the struggle of unknown artists trying to pursue a career in the business.

Writing, starring and directing a film is an accomplishment unto itself, but to seamlessly construct an amazing movie on a first try like “In A World” blows my mind. What astounds me most is how natural the dialogue flows from all of these captivating characters and immediately immerses the audience into the film. Lake Bell assembled an impressive cast with Ken Marino, Rob Corddry, Michaela Watkins, Demetri Martin, Tig Notaro, Nick Offerman, etc, who really brought this script to life. Hands down, Bell’s beautiful, bold script persists as the best comedy of the year. The script contains many interesting characters exploring everyday conversations and naturally addresses realistic situations in a unique way. All of these characters are well rounded and I genuinely would be interested in seeing a film about all of these individual characters. Again, something quite impressive for a first-time screenwriter best known as an actress. 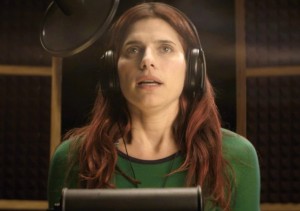 Bell’s real life obsession with accents added an amazing depth to her character Carol and every moment she appears on screen is completely captivating. Whether she’s mocking/interacting with a twentysomething possessing a “sexy baby talk,” recording interesting accents with unsuspecting people or wearing overalls in everyday situations, Bell’s Carol is the quirky girl next door you want to see succeed. Performing voice-over is all about manipulating your voice and the cast does an astounding job imitating different social groups, ages and genders. Even Bell’s interpretation of a Hollywood agent (Gustav’s agent) is remarkable considering you only hear her voice. The beautiful voice manipulation demonstrated throughout this film makes the audience appreciate this industry’s hard work even more and it’s almost unfathomable there are only a handful of people controlling all these voice-overs. Bravo, Lake Bell! 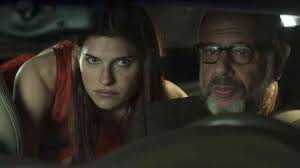 Whenever I walk into a movie I want to be surprised, but more importantly I want to be entertained. Not only did I thoroughly enjoy watching this engaging movie from beginning to end, but couldn’t stop discussing the clever dialogue and situations these characters endured. Lake Bell is one of the sharpest and underutilized comedic minds of this generation and hopefully people will finally recognize her hard work. Bell boasts one of the best triple threat debuts I’ve ever seen and I can’t wait to see what else she has up her sleeve. Hollywood, take notice because Lake Bell is the next great female filmmaker and one of the most mesmerizing, hilarious actresses around.

Earlier this year, Bell won the Waldo Salt Screenwriting Award for her script after the film premiered at the Sundance Film Festival. I have a gut feeling this is only the beginning for her and consider this movie her warm up. Knowing her comedic timing in projects like “Children’s Hospital,” there is plenty more to behold. Don’t wait, go and see this “In A World” immediately!