Home / Book Beat • Book signings • Contests • Conventions • Featured • Q and A • Signings and Cons • The Lovely Erica / Inside the Scarlet Guard meet up at YALLFest! Win a signed ARC of Glass Sword!

Alright! I was one of the first 50 people to officially be sworn in as a part of the Scarlet Guard at the meet up at YALLFest last weekend! Want to know what happened? Do you want to take home your very own SIGNED ARC of Glass Sword months before it’s released? Then read on!

If you’re not familiar with the Scarlet Guard, then you probably haven’t read Victoria Aveyard’s debut novel Red Queen. In this world, humans are divided into two groups according to the color of their blood: red or silver. Reds are normal humans while Silvers have extra abilities that range from telekinesis, controlling fire, reading minds, etc.. With their gifts, Silvers rule the lands while the Reds are forced into more menial jobs or into the army. Mare Barrows is a Red trying to help her best friend avoid being drafted when she has her first brush with the Scarlet Guard, a rebellious group of Reds who seek to end the Silver’s oppression.

And that’s just the tip of the iceberg on what happens…go check out the book if you haven’t read it yet! 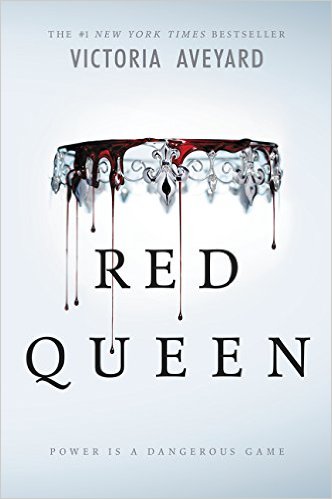 At YALLFest, one the largest YA book festivals, The Scarlet Guard Meet Up was one of the most anticipated events. Fans of the Red Queen had to sign up on line to join the Scarlet Guard and then be one of the first 50 people at the Epic Reads booth on Saturday morning to grab a ticket. The line started early so only the dedicated got in. 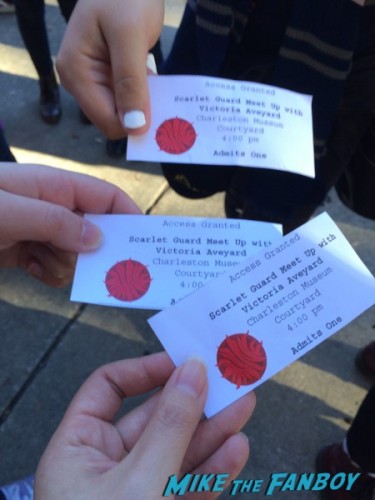 There weren’t a lot of details on what was going to happen, other than attendees would receive one of the most coveted ARCs of YALLFest – a copy of Glass Sword! We gathered around the tempting table of goodies… 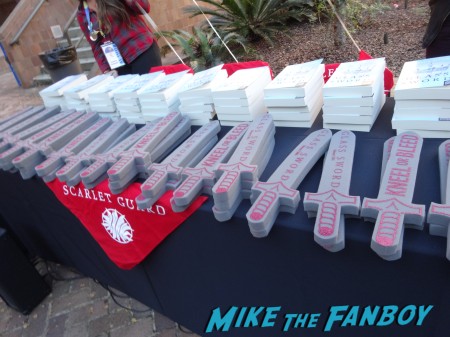 … and had a nice, intimate chat with Victoria as she welcomed us to the Scarlet Guard: “You are the first members of the Scarlet Guard which means you are fighting for equality and some really great books (laughs). I’m really excited and nervous for you to read the Glass Sword since I’m trying to repeat a little of the magic of Red Queen. Hopefully, you like it. Fingers crossed. Don’t attack me when you get to the end of the book.” Cue groans from the audience. 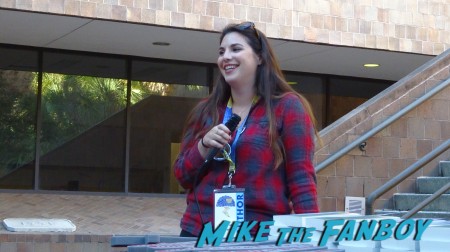 Victoria did a quick Q&A and answered questions about the books and herself. Here are some highlights [SPOILERS AHEAD FOR RED QUEEN]:

For those that wonder if the Barrows are a family of supers, Victoria answers: “Her parents do not have any abilities. No one else in their family has any abilities.”

“I always knew Red Queen would be a series because I’m a greedy writer and when I’m reading books I want more from them. So when I was writing Red Queen I knew I would write more, but I just didn’t think I would get the opportunity. Thankfully I did. So moving into Glass Sword was like a different challenge. You’re working with characters you already know and the readers already know. You want to not just match what the first book was, but you want to elevate it. I’m very glad that there were some powers that I held back on in the first book. There are some really fun new characters.” 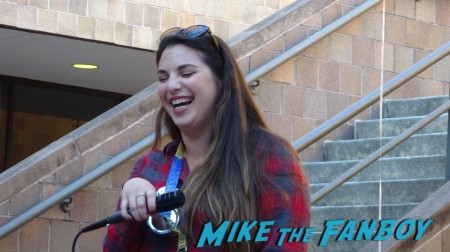 “[While writing Red Queen] I didn’t know where I wanted it [the series] to end. I had no idea where the ending would be until I was in the middle of writing the second book. Now I know where I’m writing to. So that’s why, when I was outlining the third book, which I’m doing now, I realized I can’t get there in this one book so that’s why it’s going to be four.”

Victoria’s not sure if there will be more short stories since her focus is getting the main series done. She has a title for book three, but she’s not saying anything yet! The Scarlet Guard will be the first to know when the time comes.

On who she would cast in a movie adaption of Red Queen, she says, “I’ve kind of started answering this questions. My two favorites for Mare (the others, I’m not quite sure), I like Lindsey Morgan and Malese Jow.” 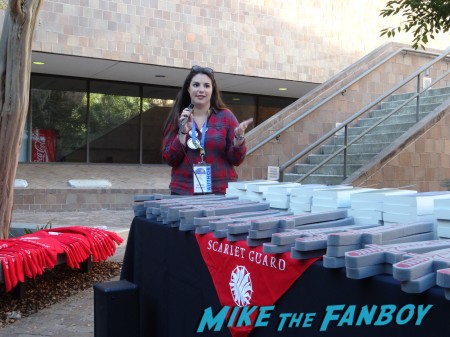 If she could chose a superpower from the powers we’ve seen so far, Victoria would “be a Whisperer because that’s the best defensive mechanism. It’s also a pain in the ass because I don’t want to listen to everybody’s thoughts so it’s a catch-22. If I could have any superpower then I would totally go for time travel. I’m a history nerd and I would grab popcorn and go around and see what really happened.”

Of course she would have a tough time choosing where she would go: “I love the Crusades (the third if we’re getting technical). I love ancient history, especially ancient Egyptian. I’m a big fan of American history, Revolutionary history, the Civil War history, WWI, WWII, Tudor history…I’m just going to keep going. My dad’s a history teacher if you can’t tell.” 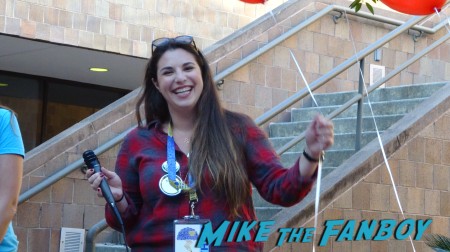 She also talked about her fandoms: “I’m a huge Game of Thrones/A Song of Ice and Fire fan. I post on the reddits. I’m a big fan of Lord of the Rings and Star Wars. I am so psyched out for the next Star Wars movie. I’m going to go dark. You will not hear from me for the two days around that because I don’t want to know anything and I don’t want anyone to spoil me and I know people will. (And I will hunt you!) I’m a big fan of TV, shows that are on right now. I’m a big fan of Arrow. I was a big fan of Gossip Girl back in the day, too.”

Since November is NaMoWriMo, she had some advice for writers: “I’ll give you the best advice I ever got: get to the ending, just write to the end. Because, I guarantee you, whatever problem you run into, by the time you get to the end of it, you will have figured it out how to fix it. Even if you have to, write ‘this happens’ and then jump to the next place where you know where you’re going. In terms of writing fantasy, if you can get your audience to believe one unbelievable thing, everything else must build off of that. In terms of Red Queen, the one unbelievable thing is that some humans have evolved to have superpowers and then everything else has to make sense in terms of that world.” 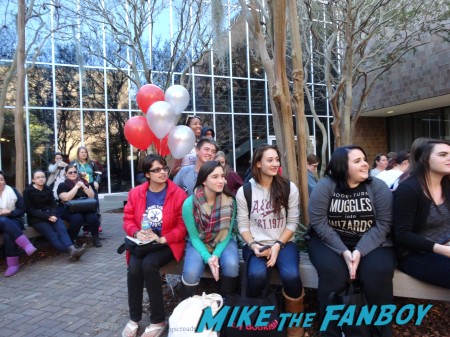 After that, we all received the Scarlet Guard bandannas, foam swords and, of course, the ARC for Glass Sword! Victoria laughingly knighted the guy who was first in line for the tickets this morning since he was up well before the sun. 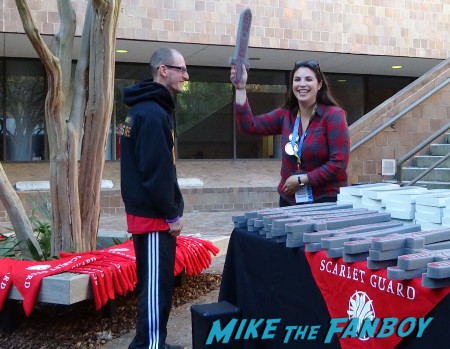 Victoria was kind enough to sign them as well! After being in large crowds and fast moving lines, it was nice to have a quality moment at YALLFest. 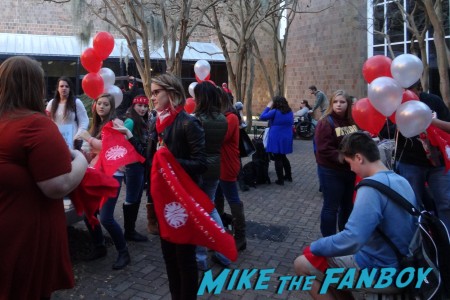 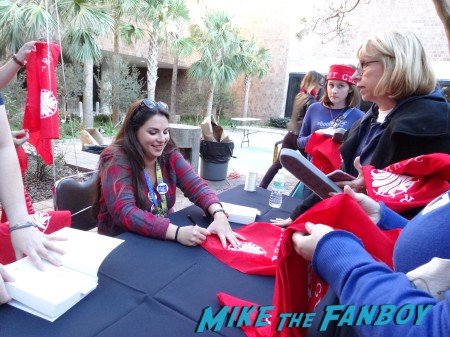 Before the event was over, Epic Reads gave us a few extra bandannas so we could recruit folks into the Scarlet Guard. I found a pair of forlorn locals who had a rough day with the long lines at YALLFest and they missed out on the meet up. Luckily, I recruited them so my bandannas found a good home!

But I still have one more to give out! 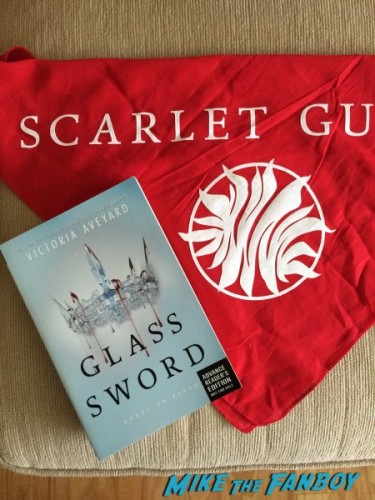 I was lucky enough to grab one at New York Comic Con so I will be giving away this highly coveted ARC. Now to be sure it doesn’t go to someone who will just put this up for sale, you’ll need to fill out the rafflecopter with some easy tasks: 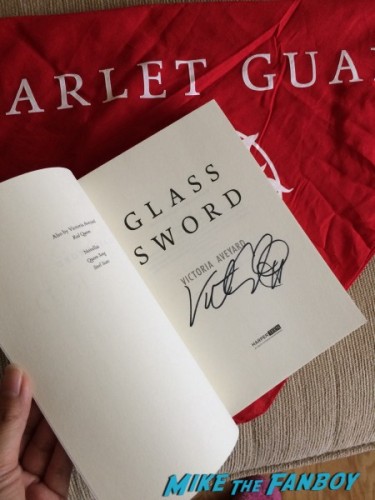 This is open to US residents only (sorry folks!) and ends December 4th.

Rise, red as the dawn!

Want to know what else happened at YALLFest?  What more signed stuff, ARCs and swag? Check back for my YALLFest recap because I have a few more giveaways planned.