Insidious 2 is heading to DVD and Blu-ray so Ace thought it would be a perfect time for a recap on the Insidious 2 premiere! And then… I forgot… So, I’m awarding myself the Sleepy Theo. 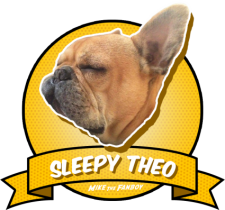 Hey it happens… I’m one man! Not that Ace cares. After a two hour talking to, there was crying, weeping, and most importantly sadness, so finally… I’m posting his article.

Ace is a huge horror nut… and a huge fan of Debbie Reynolds… How those two go together, I’m not sure, but it’s worth noting.

Anyway, check out Ace’s recap below!

What’s up autograph fanatics! Ace here with a recap of the Insidious 2 Premiere.

The DVD and Blu-Ray for Insidious 2 are out now guys! Go get the film if you haven’t seen it yet! I have to add, if you are a fan of horror films, these two films are great with out of the box material. They have this “Don’t Be Afraid of The Dark” feel to them… Ya know? The 1973 film with Kim Darby?

Regardless, I had to head down to the premiere as soon as I heard it was happening. My brother and I quickly put in a photo order that morning and zoomed there as fast as we could. We had just watched Insidious early this summer and I think it’s definitely among the best horror films that I have seen in the last several years… It is that good…  If you are a horror fanatic or a movie buff in general, I definitely recommend it. It is very well done and you won’t regret it. I have always been a fan of James Wan and his horror films; there isn’t a doubt in my mind that Insidious 2 wasn’t going to be just as amazing.

We arrived at the event around five. When we showed up, I was surprised to see the lack of a crowd. We easily got first row as there were very few people there. After several security shifts, we were aligned to our spots. 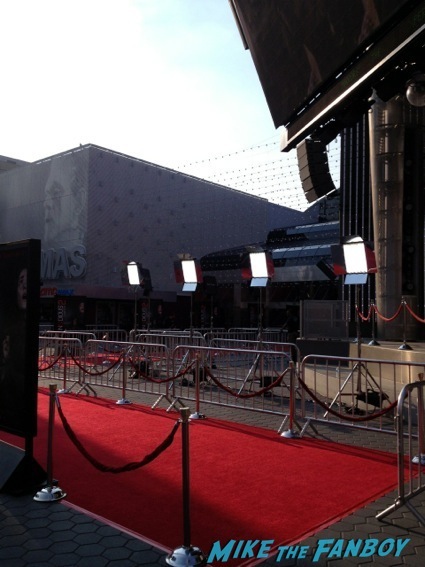 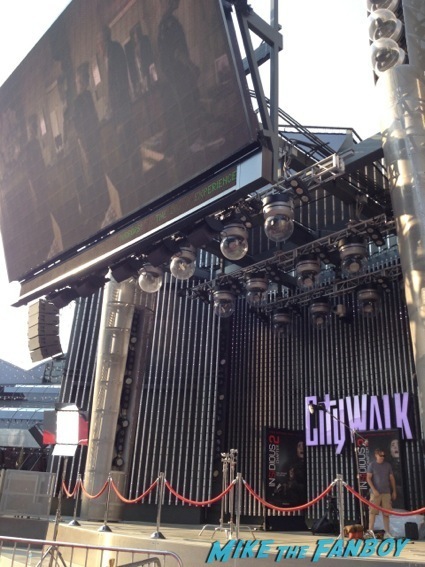 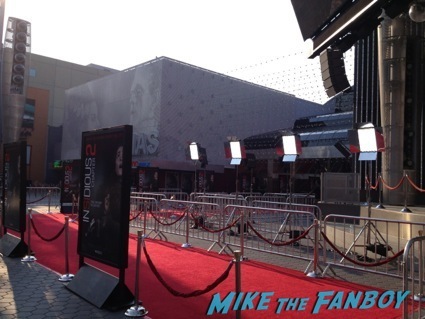 The benefit to being among the very few graphers there, our team easily spotted people that the tourists would have no knowledge of.

The kids in the film were the first to jump on the carpet. Originally, the rumor was Ty wasn’t supposed to show up, but the rumor wasn’t accurate as he supported the film regardless. The carpet was right in front of us, and also had breaks in between each board. So, we called their names as they were on the carpet, and most came over…

Ty Simpkins was the first come over and I added him to my mini-poster and my vinyl record that already had Joseph Bishara. He is always so nice and well-mannered. Supposedly, some overjoyed fan girl tackled him at the Iron Man 3 premiere so that probably scared him enough to not want to come to the premiere. 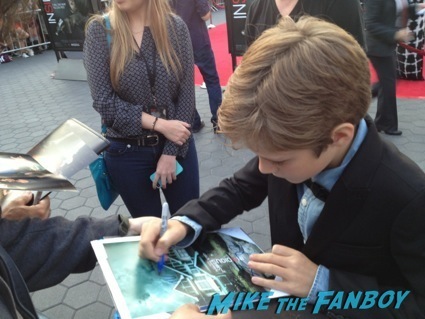 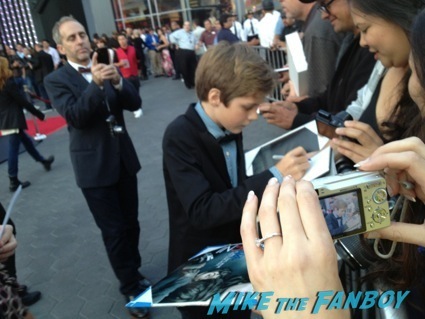 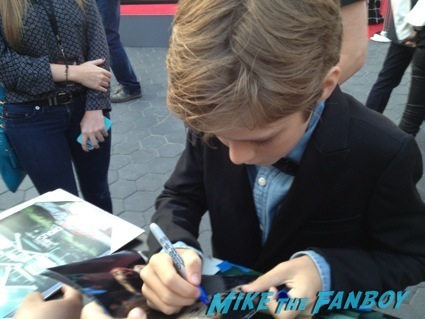 Andrew Astor came over as soon as we called. He played Ty’s brother in the film. It was pretty awesome because although he could only do a few circles, he tried his best to sign everything that people asked. 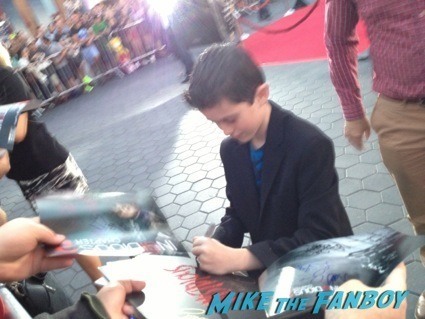 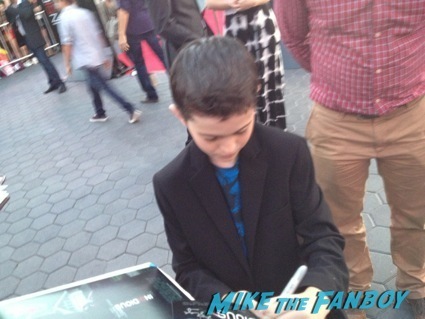 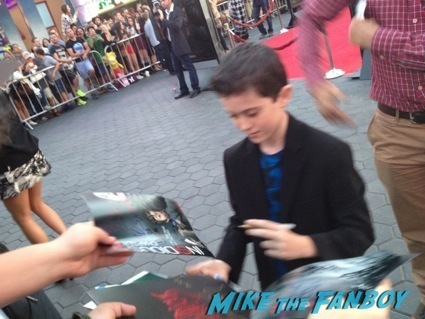 Garrett Ryan was the next that came over…it just started this wonderful constant flow of people… It helps when you can actually spot people. He signed everything we had. Super cool kid! 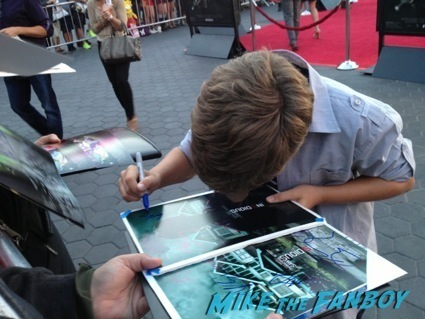 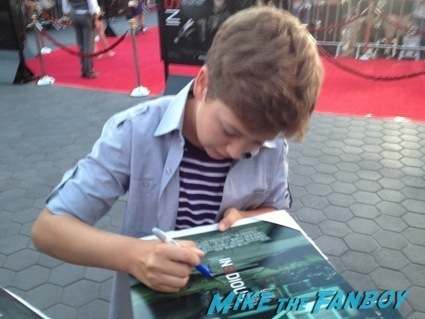 Danielle Bisutti looked amazing! I had nothing tangible for her so I had her scribble on the back of my Insidious record. Watching the film after the fact, she was amazing! 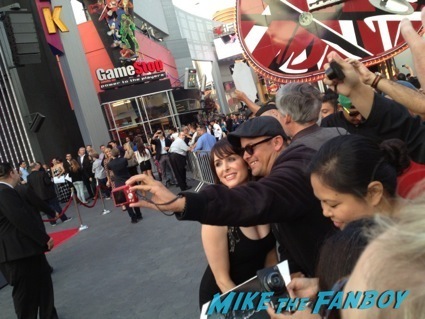 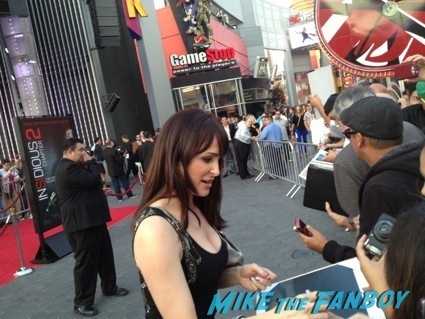 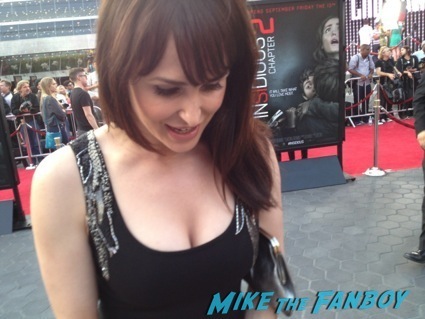 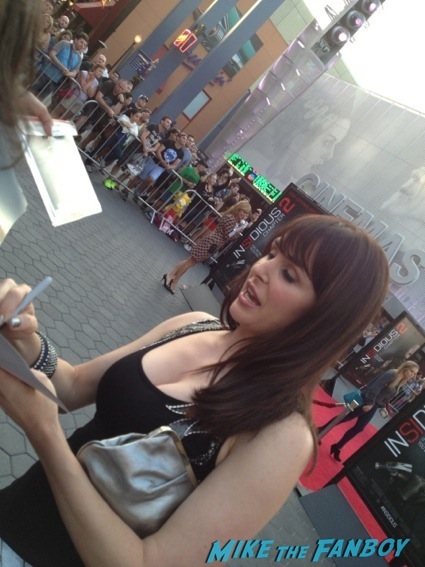 Joe Bishara was standing in line… We called him over and he told us he would come over after… As soon as he reached the carpet, and hit the point in front of us, he came over. He has played such huge roles in these James Wan horror films. Most of the time, he is the demon within the film. At premieres, it always seems like he feels uncomfortable with the crowd. Regardless, he was nice to come sign a few. I added him to my Conjuring and another of my Insidious mini-posters.

Lin Shaye zoomed right over and did the line as soon as the fans called her. I got her on my Critters 2 piece as well as one of the mini posters. She is always so nice! She tried signing as many as she could before they pulled her away.

Patrick Wilson followed Lin, signing for the entire line that wrapped around! He is always such a class act. He signed my Watchmen record and Insidious vinyl… We thanked him for coming over. I wish more people could be more like him. 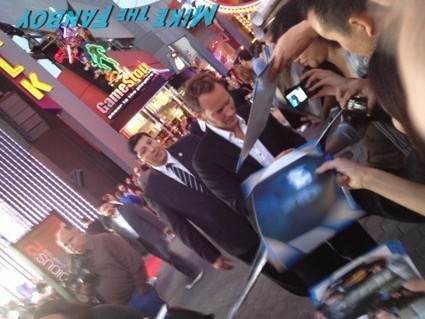 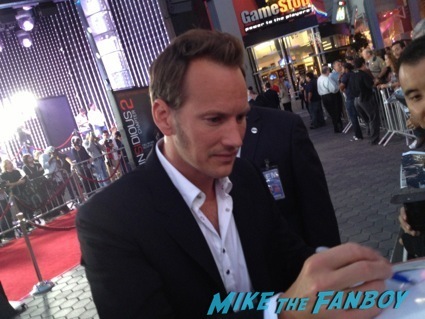 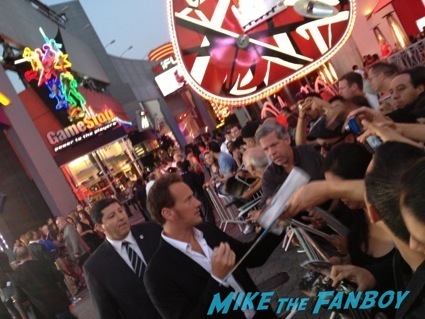 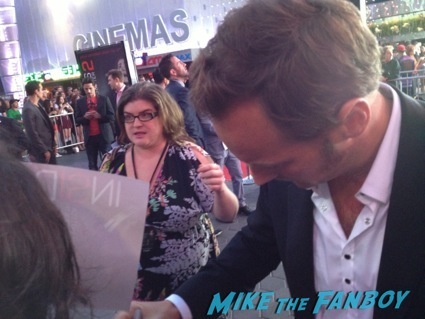 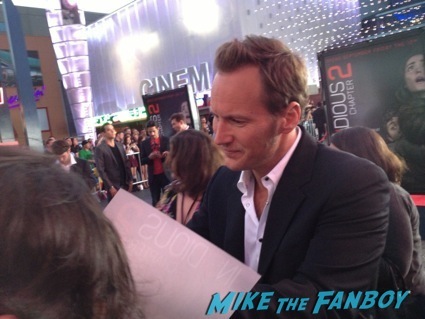 Rose Byrne followed Wilson. Signing a few at the beginning of the line before the security pulled her away. She was the only person I needed!

Angus Sampson came over mid-carpet. He didn’t think we were calling for him but when he came he signed everything… He just doesn’t look like how he does in the movie… It’s like day and night. 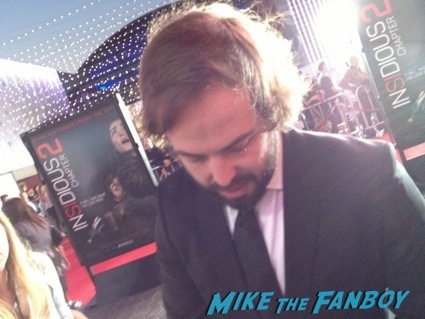 Barbara Hershey grudgingly signed a few… We were the only ones who called her so she did maybe, at most, fifteen. I got her on my Beaches and Insidious mini-posters. She kept telling her publicist to calm them down… She called it quits after she signed our pieces.

Leigh Whannell also ran over and signed everything we put in his face. Super nice! Unfortunately, I didn’t bring my Saw piece. He signed everything! He was the last person to sign during the beginning of the premiere. 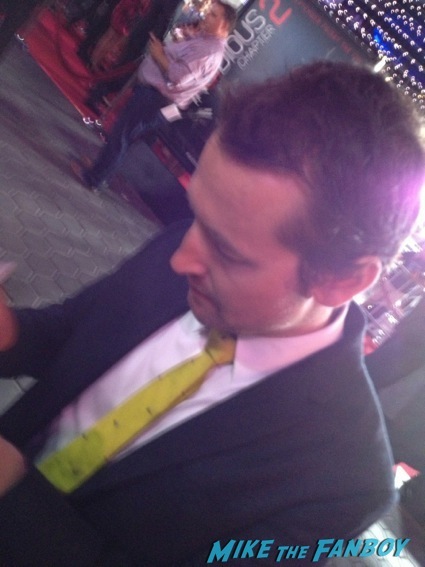 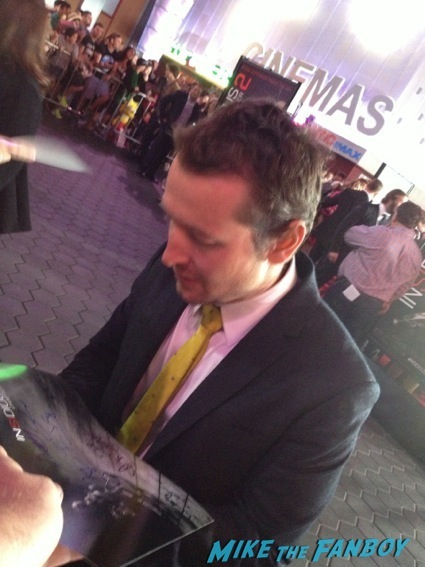 While waiting for exits, I added the producer, Jason Blum, to all my pieces. He was super nice as very few asked.

I needed another Hershey, Shaye, and Wilson on the way out… We hoped that Byrne would scribble a few, but she ignored everyone and they escorted her to the back.

Steve Coulter, Leigh Whannell, as well as Angus Sampson signed as many as they could on the way out…

Patrick Wilson walked out, and I asked him for an autograph. He grabbed the pen and as he was signing it, the security guard came from behind and basically knocked down the photo. He had told the guard he was going to sign the photo, but regardless, it messed up the autograph…  It’s a complete piece, but it could have been perfect! 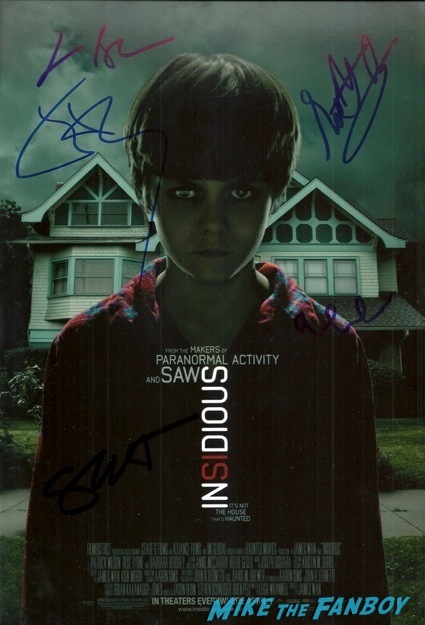 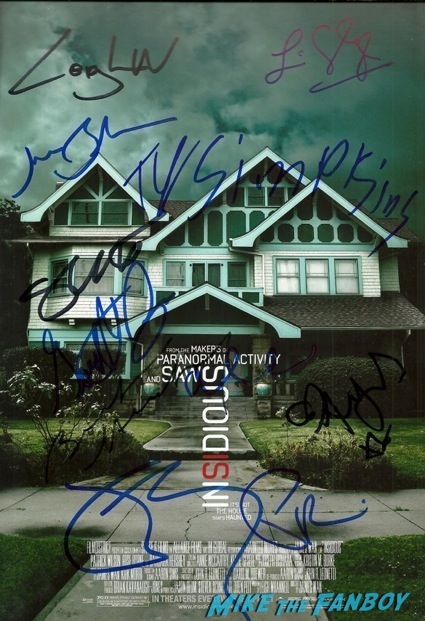 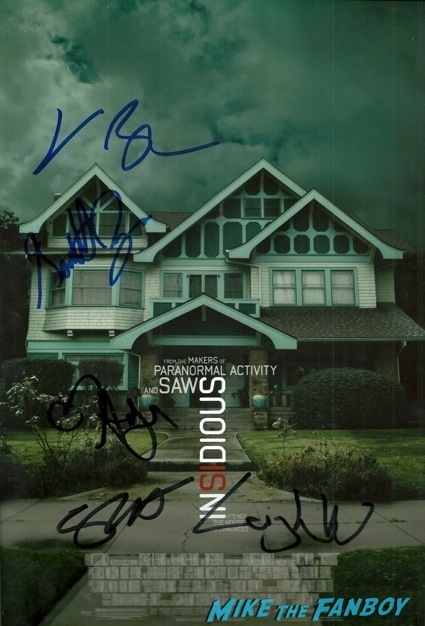 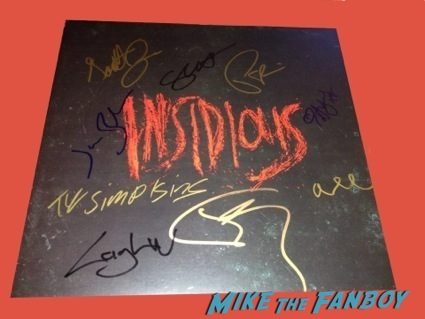 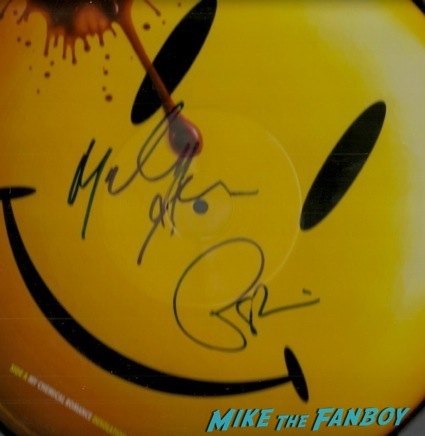