I love Justified.  I mean I seriously love this show.  I haven’t watched every episode of a show since the X-Files and I was hooked the moment I saw the first episode.   And no, before you start thinking it, it had nothing to do with Timothy Olyphant.  I mean he’s amazing on the show, but so is everyone.  That’s what hooked me.  The fact that it’s filled so many amazing actors, writers, characters, etc.  To think they took a short story by Elmore Leonard and turned it into 5 Seasons is astounding.

Justified has a history of bringing great character actors in each season to pit against the Marshall service and the Crowder’s dominance over Harlan County.  I was thrilled to learn that this season Michael Rappaport joined the cast as Darryl Crowe Jr. and let me tell you, watching him and Timothy Olyphant banter is great, but watching him go head to head with Walton Goggins’ Boyd Crowder is where it gets juicy. 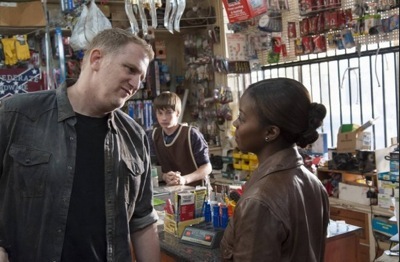 Needless to say, when Mike asked if I’d like to do this interview I enthusiastically said “YES!”   Any chance to do anything associated with Justified and I am there!

The Q&A was via conference call and I had a list of questions, which were all asked before they got to me.  LOL.  But I rose to the challenge and managed to get one in, but more on that genius moment later. 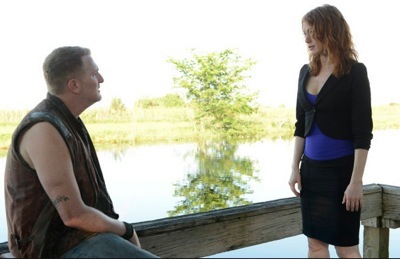 A few questions centered around what drew Michael to this character (he was already a fan of the show) and what’s it been like playing Darryl Crowe:  “It’s been one of the more fun jobs that I’ve had in a long time as an actor.  To be able to play somebody that says and does pretty much whatever he wants, he’s manipulative and I think he’s very self-serving, although I don’t think he’s aware of it.” 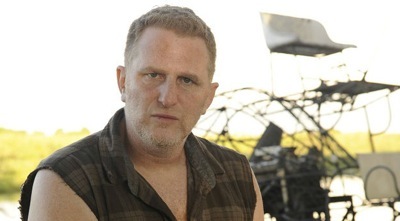 He also talked about how hard it is to get into the character and accent, but that getting out is the easy part because the intensity is so demanding that by the time they’re done filming everyone is ready to walk away for a little while.  And he evidently agrees with me on the brilliant writing and acting on the show; “I think the thing that makes the show so popular first comes from the writing and the world that’s set up, and then I think it’s the actors…I think they’ve just created really, really fun characters.  I think it’s like good vs. evil, but the lines are skewed.”  Which is true because Raylan has definitely been set up as the ultimate anti-hero.  The Marshall always seems one step away from becoming his criminal minded father and he’s crossed the lines one too many times.  If he comes out of this season with his badge and ‘honor’ still intact I’m going to be really surprised. 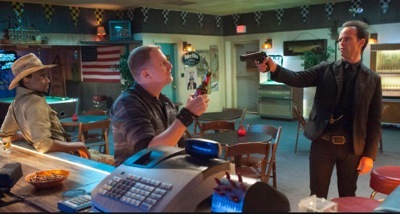 There’s no doubt that the talent on the show is stellar and Michael had nothing but positive things to say:  “It’s been a real pleasure working with [Walton Goggins], and him and Tim’s insistence and persistence on pushing the envelope, not just for them but for the show and for all the other actors, has been a real pleasure and just a real—it’s just been a lot of fun.  It’s been challenging and creative. Those guys, they’re just really good, and they really care about what they’re doing.  It pays off in the end result, but they really are team players and very welcoming and encouraging for everybody to do good.”

He talked about some of the psychology of his character, how Darryl does everything for his family and family is what matters no matter how badly they screw up or how much they may hold him back.  It’s a theme Darryl and Boyd share, according to Michael: “They’re both criminals, and at the end of the day they’re just trying to find their way and make their way.  So that’s definitely something we talked about.”

I won’t go into what’s been going down on the show, but I say get caught up and buckle in.  I have a feeling we’re in for a wild ride. 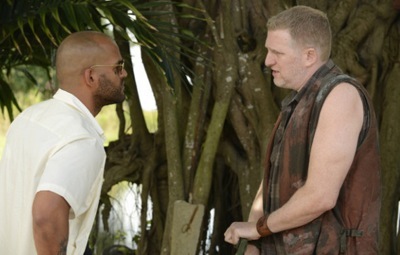 So my question.  After taking myself out of rotation a few times because someone beat me to the punch, I finally thought of something I really wanted to know.  What scene did Michael enjoy shooting most between Darryl and Boyd.  He started off answering, and then his phone cut out.  I KILLED THE INTERVIEW :-O   Ok, not really.  They called him back and he was polite enough to keep going.   “My favorite moment between Darryl and Boyd was probably the first scene when we met in the bar.  That was probably my favorite.  It was a really long scene.  It had ebbs and flows and twists and turns.“

In between talk of Justified Michael went into his love of reality dramas, like The Real Housewives, discussed the Knicks, some of his upcoming projects like for 30 for 30 past projects he loved…but really it was all about Justified for me 😉

As far as what the future holds for Darryl Crowe Jr.:  “Darryl is not playing around.  I can just say this, he’s not playing around.  He’s not taking any [unintelligible] prisoners going forward.  He’s getting more and more impatient as things go along.  So the best I can tell you is that Darryl Crowe Jr. is definitely coming in—he’s ready to get what he wants to get. [sic]…there are a lot of big twists and turns at the end that are going to be, I would say, kind of shocking.  There are a couple of scenes that are like crazy.”