You know, it’s hard for me to even think about Mel Gibson being nice after all the crap that went down, with the phone calls, the yelling, etc… I know his career has taken a hit and Mel hasn’t been out and about a lot.

Still I can’t help but like some of Mel’s older films, Braveheart, Maverick, Lethal Weapon, etc.. Mel was out and about last week for a rare Q and A for his film Apocalypto which was released in 2006. Now, I’m in Kentucky for the holidays but OTG John is still in La La Land so he headed down to try and get Mel… Will it be a Christmas miracle? Will Mel be nice?

Check out OTG John’s recap after the jump!

In my 40 plus years of collecting, strange things still can happen in this hobby. No, the world didn’t come to an end nor did Natalie Portman suddenly become nice to her fans. Last night at the dawn of the so-called Apocalypse, the notoriously mean and reclusive Mel Gibson, met and signed autographs for the fans! Not only did he sign BUT he racked. AND he was actually nice! I just wish I brought more items! to get signed! lol!

Anyway, with 2012 coming to an end I thought I’d make one last autograph trip to Hollywood. I still needed Donny and Marie, don’t laugh, on a few things and with the weather being sucky lately, yesterday seem to be a good day to go out. I normally don’t make the drive from the OC to LA just for one person/event but I noticed Mel Gibson was going to do a Q&A for the movie Apocalypto at the famed/historic Egyptian Theatre that same night. Two events, so why not? I didn’t think Mel would do it and I was actually thinking Donny and Marie was the “sure thing”. Boy was I wrong. Donny and Marie were both sick with the flu and barely signed 2 autographs each! I was lucky to get one duo photo signed going in.

Then I headed to the Egyptian for Mel. There were only two papps and myself at first. Mel arrived early and self drove his car into the back right next to the side door! He came out and actually wished us a Happy Holiday! BUT he didn’t sign. It didn’t look good but with Mel I wasn’t surprised. More collectors and papps showed up but what was weird was that none of the regular dealers/collectors showed up! Maybe because Mel stiffed the last time he was at this venue and they figured he would stiff again? Anyway, that just helped matters more with them not in the picture. 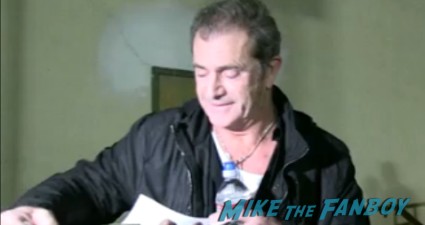 I get six out of him!

One item I got him on was an old 8X10 duo shot from Lethal Weapon that I’ve had since the Lethal Weapon 4 premiere that needed Mel to finish it! 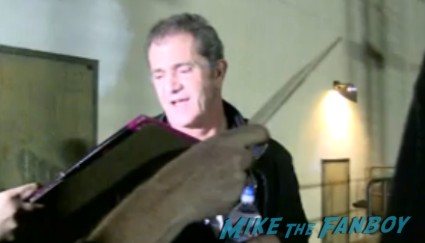 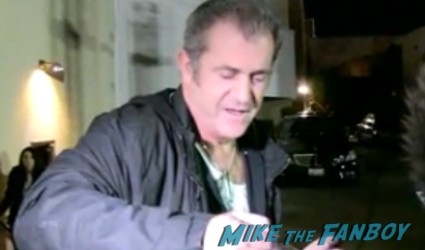 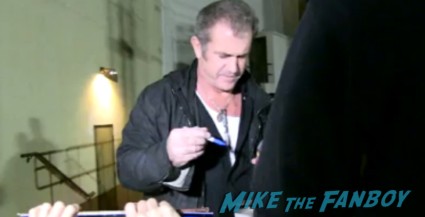