It’s encounters like this that make me love this hobby! I knew Jude Law was nice, but lately luck has not been on my side or a lot of people I know’s side as far as autographs are concerned. So, I didn’t know if this would work out for Scotty or not.

Scotty, our resident music man headed out to try and get Jude Law to sign his The Talented Mr. Ripley DVD insert. I needed a break myself so I sat this one out. I have Jude Law on most of the stuff I really wanted so I figured this would be a good time to rest after the SAG Awards.

Anyway, check out Scotty’s full report about meeting Watson himself after the jump!

I heard that Jude Law was making a rare Los Angeles talk show appearance and was excited at the opportunity to finally meet him. Jude was in one of my favorite movies from 1999, “The Talented Mr. Ripley.” I wanted him to sign my DVD insert. I have been trying to get Matt Damon on this during his last round of appearances as well. Unfortunately, all I keep hearing is how nice he is, and I have still yet to get him. He has left quickly or not signed the last few times I have gone out for him. It is very frustrating.

I have been working on getting my inserts from my older DVD’s signed as they are not making them anymore. I miss opening DVD’s and getting liner notes, and production stills. Things are not the same. It is sad when quality is put to the wayside.

I arrived at the talk show late, as I had a meeting after work. There were only a few people waiting. I was surprised as I thought Jude would have a lot of fans. By the time he arrived, a number of people showed up. Jude got out of his car very fast and did not look over as we called to him. This made us all a little nervous, but we still had hope. As the time neared for the show to finish taping, Jude exited the building and came over to us without hesitation. Jude was very nice to us, signed anything we had, and took photos with each of us. 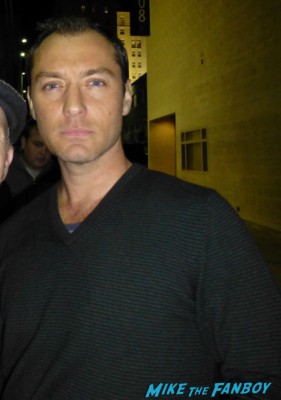 He was a class act! Thank you Jude for a wonderful evening and making your fans happy. 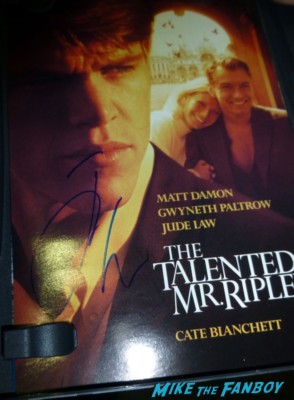