Home / Fanboying! • Jack • Q and A / Jack Has A “Knight-Mare” When He Meets Keira Knightley But Joe Wright Does The “Wright” Thing! Anna Karenina Q And A Madness! Autographs! Photos! Sadness!

Ohhh Dear… That’s all I have to say… When it comes to certain celebrities you always expect the worst. This past year, one of the worst people who have been traveling the awards circuit has been Ms. Keira Knightley. She rarely will give anyone the time of day and when she does it has almost been with a snarl. I’ve seen a couple autographs from the rare times she has signed and it’s barely a check mark.

So disappointing. I’ve been a fan for a long time and this has been the first time I’ve had a chance to meet her, much like Jack!

Jack headed out to a Q and A for Anna Karenina and… Well… I’ll let you read the whole story after the jump!

Don’t ever meet your idols. How many times have you heard this? Throughout my autograph collecting career I have heard this numerous times and it still doesn’t get old. Even though I appreciate certain entertainer’s careers, not everyone enjoys “meeting their fans” and they often misjudge actual fans for dealers, which is most unfortunate. Although I could go off on a complete tangent discussing this matter I’m going to go a complete 180 degrees and discuss the exact opposite, having a great night with very low expectations.

Everyone here at Mike The Fanboy is extremely excited because most celebs that aren’t typically out (Nicole Kidman) or seldom out (Christopher Nolan) are greeting fans for that one last awards push to make their film a contender. Now I have said this several times already (and I will keep saying it), but this is my favorite time of year due to this very reason. What other time of year can you say Matt Damon, Gus van Sant, Anne Hathaway, Hugh Jackman, Sally Field, Mark Boal, Dustin Hoffman and Kathryn Bigelow are out promoting their films at multiple Q&As/ awards events over the course of a few days? As a result, exciting events are announced daily so it’s just a matter of keeping an eye out for cool opportunities.

Both my girlfriend and I had been looking forward to seeing “Anna Karenina,” but she had previously made a promise to see it with one of her friends. However, once I discovered there would be a double feature screening of “Anna Karenina”/”Pride and Prejudice” with Keira Knightley and Joe Wright conducting a Q&A in between films, my girlfriend scrapped her original plans and attended the screening with me. I personally apologized to her friend and extended the invite out to her. Unfortunately, her girlfriend couldn’t make the screening since it was already sold out, but it turned out to be a nice date night.

6:35- Parked our car and walked towards the theater

6:45- Everyone has already been let inside (both members and non-members) and I could honestly care less as long as we get a good seat for the 7:30 screening. 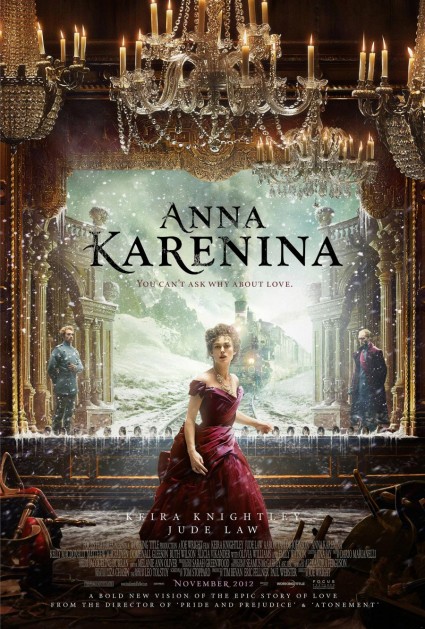 7:00- After briefly using the facilities we grab a “Roosevelt,” one small drink and small popcorn for $6 and start discussing possible dinner plans. As the theater begins to fill up I notice it’s mostly couples (including us), old women with their girlfriends or large groups of female friends. I don’t see any collectors at all inside (They all probably expect Keira won’t sign at all). Plus it means no idiots will get up halfway through the movie and ruin it for everyone- YEAH!

About 7:30- Grant, the programmer, comes out and explains the upcoming screening opportunities and the movie begins shortly thereafter. We’re both excited for the film.

About 130 minutes later, the film ends. I really enjoy Joe Wright’s directorial skills and see parallels with David Lean creating lavish costume dramas, but something felt a tad off in this film. Filming almost the entire movie using a stage was absolutely brilliant and everything seamlessly transitions from one scene to the next. Thanks to movie magic you’re whisked away and embrace the new novelty after a few minutes adjusting. The music, costumes and the casting was unbelievable. Alicia Vikander (“A Royal Affair”), who plays Kitty, is an actress to especially watch. Both Aaron Johnson and Jude Law were fantastic as the main leads with excellent turns by Olivia Williams, Kelly Macdonald, Domhnall Gleeson and Matthew Macfayden in supporting roles. With the exception of one character, everyone was brilliant and perfectly captured Tolstoy’s timeless tale. However, Keira Knightley seemed like an odd casting choice when you analyze the movie overall. There’s just something off about her in the film. Now I’m not going to bash Keira Knightley as I really believe she is talented, but her performance felt very forced as though she was miscast. Still, overall I would say it was a solid 3 out of 4 stars and should be seen in theaters if you can handle costume dramas.

Before the moderator has a chance, both Keira Knightley and Joe Wright sneak down the aisles prior to their introduction as the credits roll. 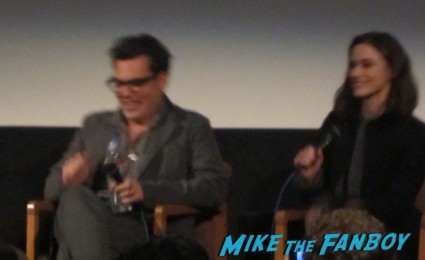 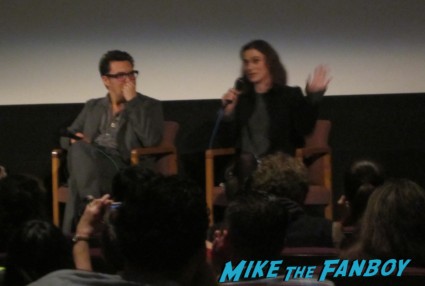 Both were quite charming and very entertaining with their quips, particularly Joe Wright, who discussed his affinity for strong female characters and “not understanding men at all.” 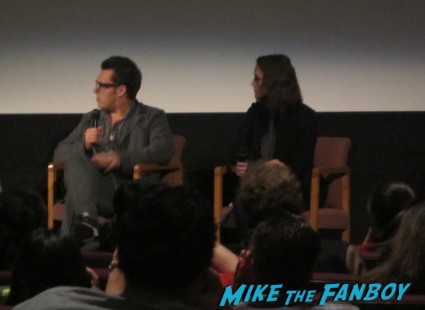 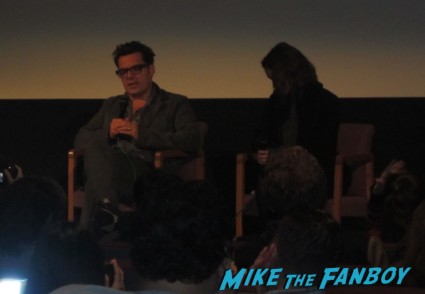 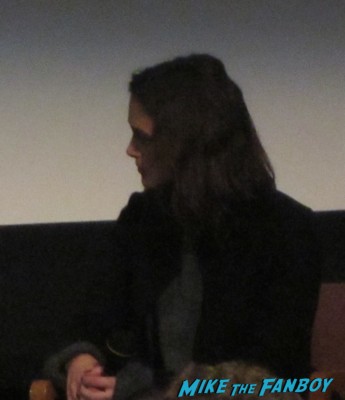 I was quite taken back by Knightley’s genuine fondness for each question asked and seemed like a completely different person from everything I have read.

(Editor’s Note: Why where would you have read that Jack? WHERE! LOL… M-) 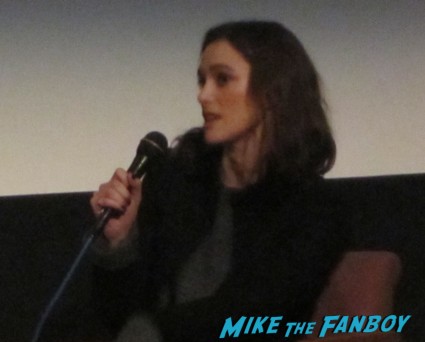 However, as soon as the Q&A ended we were asked to remain in our seats and Keira Knightley did her best Usain Bolt impression running out the stage exit in less than 10 seconds flat. Joe Wright followed as well and they were whisked away with only one middle aged women really reaching out. Even young girls and women in the front with scraps of paper and DVDs were no match for Keira’s quickness.

Again I had no interest at all and the slimmest of hopes, even though I did bring an “Atonement” and “Pride And Prejudice” DVD should we be given an opportunity (more for Joe Wright than Keira. If there was even a remote chance I would have brought my “Love Actually” DVD signed by Colin Firth). My girlfriend mentioned she enjoyed “Atonement” so I had her store the DVDs in her purse just in case, but I wasn’t holding my breath.

We casually walked out of the theater and noticed a town car waiting in front. I immediately thought no way and saw Joe Wright walking towards us. I asked my girlfriend to open her purse and I pulled out the DVDs. Before he walked into his car I politely asked if he could sign my DVDs for me and I completely fumbled opening the Sharpie. When he started signing the “Atonement” DVD I asked him to personalize it for my girlfriend and he gladly obliged after signing my “Pride And Prejudice.” I said a couple of kind words and thanked him for coming out. It was one of those bumbling fanboy moments, where it’s obvious I’m not a dealer. 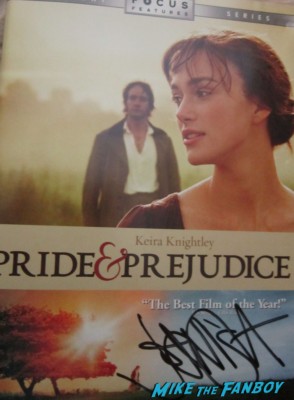 When I turned around my girlfriend was nowhere in sight and actually decided to pet a cute dog passing by instead. She was pleasantly surprised when I handed her the “Atonement” DVD personalized to her and she possessed the biggest smile. Afterwards, a couple of people made requests for Joe after mine, but I didn’t pay attention if they were for pictures or autographs. Still, it was a pretty fun date night and we each wound up with autographs. Sometimes it’s best to underestimate opportunities so you can be pleasantly surprised. Until the next time, happy autograph hunting! 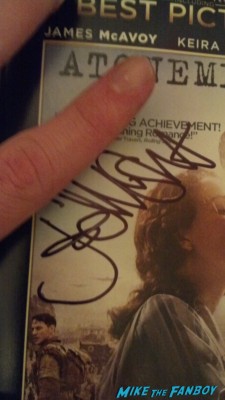