The one thing I love about the autograph hobby is that two people can be at the same event and have two different experiences… Or in the case of the Mad Men event at Paleyfest very similar experiences.

Like I said in my write up the cast was awesome! And I was lucky to score a free ticket to go in. Jack on the other hand sprung for the front row seats and had great success!

Mad Men is the best drama on TV right now, and I’m so happy it’s finally coming back!

Check out Jack’s recap of Paleyfest 2012… The Mad Men panel!

It’s a Mad, Mad, Mad Men World. Nowadays, it’s difficult to not come across a Mad Men advertisement. As every Mad Men fan can tell you, we can all hardly wait for the season five premiere on March 25.

Like Mike and CB I also attended the Mad Men Paleyfest event, but had a slightly different experience. Immediately when the Paleyfest lineup was announced in January I was thrilled to see Mad Men on the list. As a result I became a Paley member and bought my ticket as soon as they went on sale to members long before the panelists were officially announced. Hopefully, my four favorite actors from the show Jon Hamm, Christina Hendricks, John Slattery and January Jones would show up (This wish almost came true). 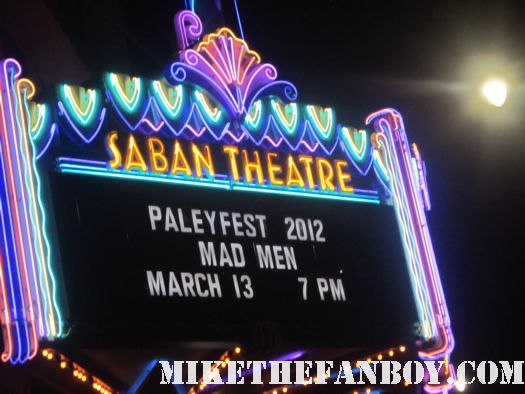 As the date approached, the anticipation was killing me. Even though I had already attended two Paleyfest events this year, in my eyes the only event that mattered was the Mad Men one. When the day arrived I could hardly contain my excitement and hoped for the best. All the primary male actors (Jon Hamm, John Slattery, Jared Harris, Vincent Kartheiser, etc.) and only two female cast members January Jones (“Betty Draper Francis”) and Kiernan Shipka (“Sally Draper”) show were scheduled to attend. No Elisabeth Moss and Christina Hendricks. Still I held out hope that Christina would show up as a surprise guest along with the other 11 panelists.

5:20- Arrived and parked near the venue.

5:23- Arrive in line and the member’s line is nearly twice as long as the general admission line.

5:35- Holy $%*! It’s cold. The wind is really unbearable right now and the sick people around me aren’t helping matters. I hate when people are coughing and surrounding me at events like this.

5:40- Seriously, it does not need to be this windy. Dandruff Guy is back and trying to unload his Mad Men cast photos. This guy is relentless and truly a nuisance selling his photos for $10. This time I actually see someone buy one of his photos. It was bound to happen.

5:55- We are let inside early (YEAH!). I think it’s because the Paley staff feels bad for us waiting outside in the cold with such strong winds.

6:20- Fans throughout the Saban Theatre are wondering what episode we will be seeing. Almost everyone agrees, there is no way in hell Matt Weiner will be showing any clips or footage from Season 5. He doesn’t want anyone to ruin the premiere.

6:55- Paleyfest intro begins and transitions to clip from “Community” that references Mad Men with Alison Brie (who also plays “Trudy Campbell” on Mad Men) being hit on by Danny Pudi as he impersonates Don Draper.

7ish- Matt Weiner introduces himself and the season four finale “Tomorrowland” before it’s screened on the big screen. (I literally just saw this two days before to prepare myself for the Season 5 premiere. D’oh! Good thing I love this episode and Mad Men) 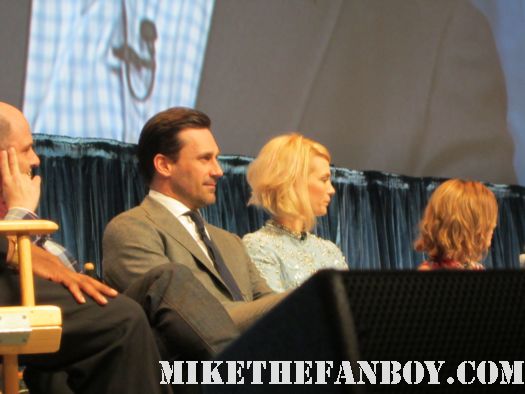 During the Q&A, douchbags, Heineken, marriage, weight loss, motherhood, and everything else in between was discussed. Everyone could hardly wait to discuss the upcoming season and everyone did their best to keep everything secret. Jon Hamm may or may not have let something slip 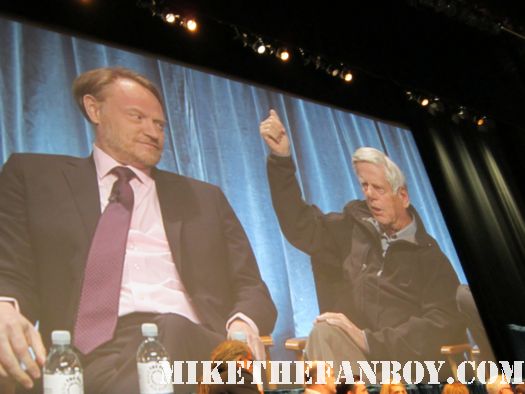 SPOILER SPOILER SPOILER, “just because Don Draper is SPOILER SPOILER SPOILER (Can’t say I didn’t warn you) engaged, doesn’t mean he gets married.” So when Mike writes two people were complaining about the Q&A and gave away their tickets I was stunned. The Q&A was very entertaining throughout and one of the best I have attended. The comradely and chemistry between the cast was phenomenal. 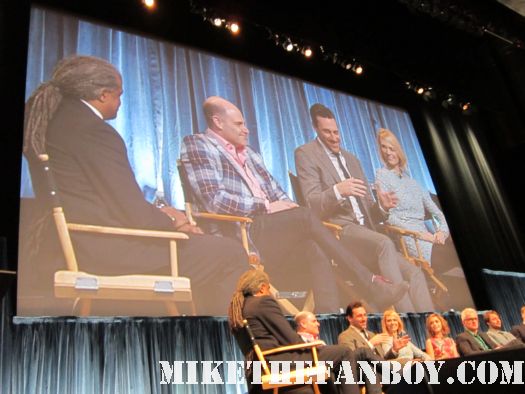 As soon as the Q&A ended, it was a mad dash to the stage (I was very close to the stage with my Orchestra Front ticket). Pictures and stories don’t truly capture the madness that ensues once panels end at Paleyfest. People from the balcony and back rows slowly sneak up as the questions start winding down positioning themselves as close to the stage as they possibly can get. In some cases, I have seen people (mostly women) half my size push and shove me aside just to get “that much closer.”

Immediately I was able to grab Matt Weiner’s attention and snagged his first autograph of the night on my Season 4 Blu-ray. Matt was super nice and gave a nice full signature, but was moving fast. When Jon Hamm started signing after the panel I noticed Jay R. Ferguson walked by (no one asked for his autograph) and before I knew it both Robert Morse and Aaron Staton were gone. Rats, I hope everyone else stays. 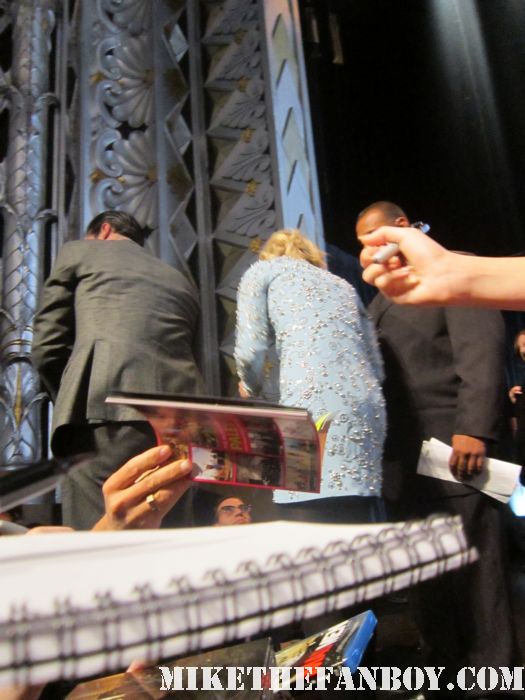 Next up was Jon Hamm and he started signing in the middle and worked his way towards the exit. He was moving quickly and I was able to snag him on his recent Entertainment Weekly and the Paleyfest program. 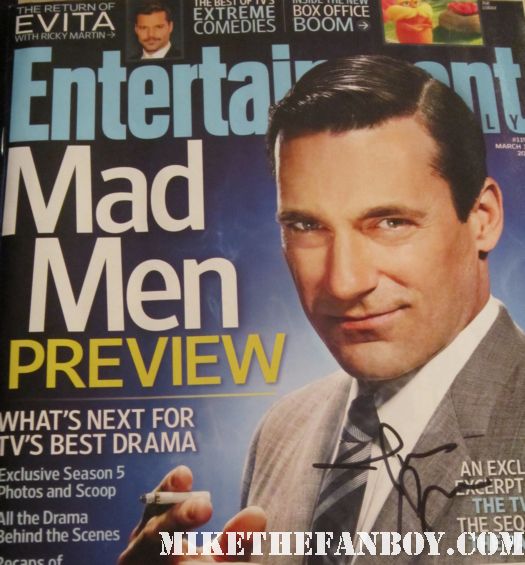 I mentioned how much I loved him in “Friends With Kids” and he was flattered when I described my favorite scene from the movie (It’s when he calls out Adam Scott’s character at the New Year’s dinner). Seriously, go see Friends With Kids! Before I could pull out my Rolling Stone he is at the end of the stage signing for fans, almost ready to leave.

Suddenly, January Jones is close by and I have my Rolling Stone ready. Like Mike mentioned, she had a silver Sharpie out and her signature looked gorgeous on the cover. 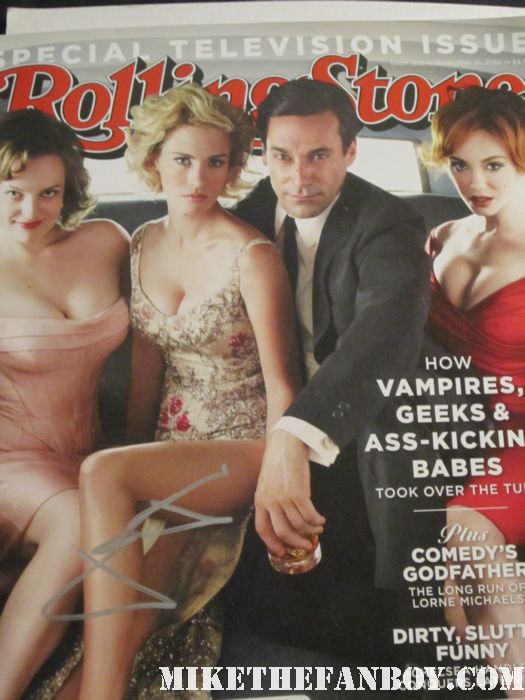 Not only did she sign my Rolling Stone, but my Blu-ray, and my Paleyfest program. I have always heard mixed reports about January and she seriously surprised me tonight. January Jones was super down to earth and looked stunning. 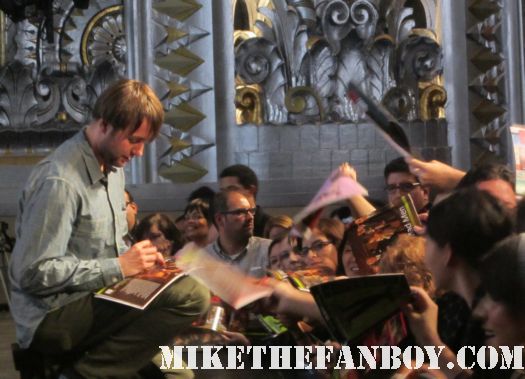 Out of nowhere Vincent Kartheiser is signing and so is Kiernan Shipka, almost right on top of each other. Vincent is the man of the night- signing everything in sight and obliging every random request. He is literally on all fours posing for photos and makes sure everyone gets a good photo. At one point, he even joked “I’ll sign small so you can get the rest of the cast on this.” Seriously, Vincent just got a whole lot cooler. Just because he plays the biggest prick on Mad Men doesn’t mean he’s a jerk in real life- he’s the complete opposite and was by far the friendliest person at the event. 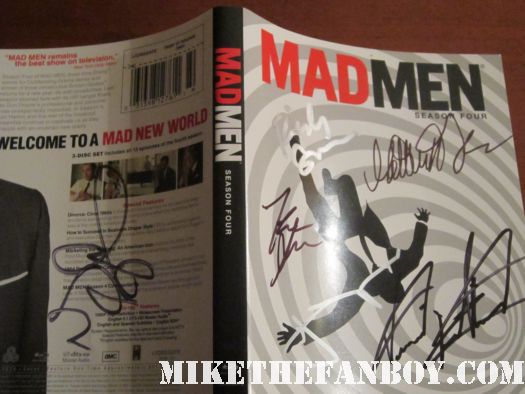 Somewhere in between I managed to snag Rich Sommer, John Slattery and Kiernan Shipka on my Blu-ray (Sommer and Slattery also signed my program). They were all signing practically on top of each other and it was hard to keep track. At Paleyfest events, it’s complete chaos trying to keep track of who is still signing, who left and who you have already met. I can’t tell you how many times people tried getting Rich Sommer and Vincent Kartheiser to sign their item again until they each said, “I’ve already signed this” before passing it back (Super awkward), but they were always cool about it and genuinely loved meeting the fans.

Jared Harris seemed to be taking off, but he turns back to us and reassures us he will be back after slipping backstage briefly. After a few moments, he comes back and starts signing in the middle section again. I hold up my DVD of Dummy and he tells his publicist he is coming over to us pointing to my DVD. 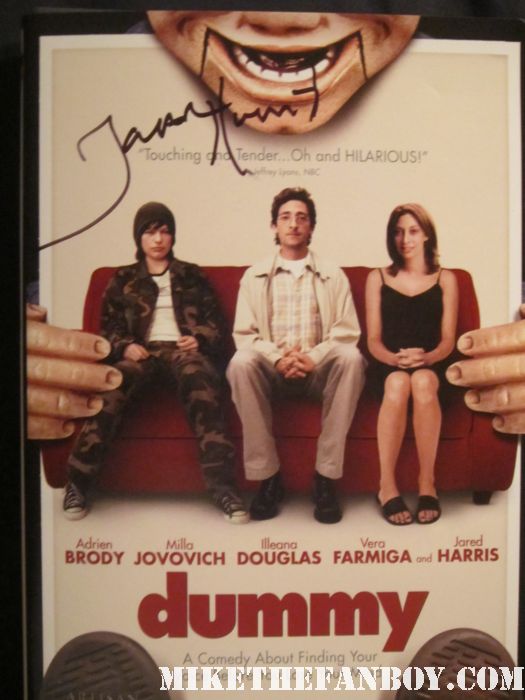 Once Jared Harris is close he apologizes to people for doing his “short signature,” but once he sees my DVD he is shocked and flattered. I pulled a fanboy moment rambling about his work on “Happiness” and that it was an honor to meet “Andy Warhol.” If you haven’t seen his performance as Andy Warhol in the indie classic “I Shot Andy Warhol,” you’re missing out. As a result, I obtained a beautiful full signature from him before he heads out.

I look to my right and it’s now only Vincent signing autographs. I knew it! Vincent was THE signer of the night and seriously showed his love to the fans. After leaving the event I notice a small crowd waiting around the Paleyfest parking lot and I wish them the best of luck. In total I wound up with 15 autographs on five different items including (2) Jon Hamm and (3) January Jones’ autographs.

Overall, I met everyone I wanted to meet (that attended) and obtained 40 autographs at this year’s Paleyfest events. Not too shabby for three events! My Paleyfest adventures were a great success and I can’t wait to see what my next autograph adventure will be. Until then, happy autograph hunting! 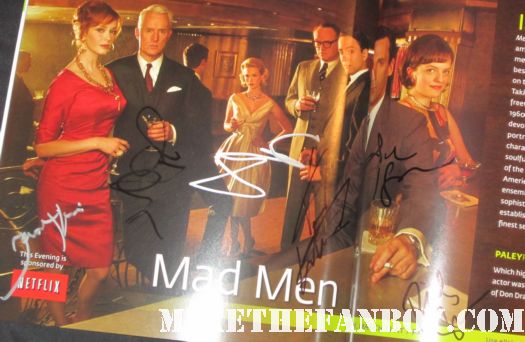