I don’t know what it was about this year, but I just had the worst luck with Matt Damon. He was super rude at the screening of Promised Land I went to, however Jack also attended a screening… a different one than I did and he was able to meet Matt Damon… To that I say Harrumph! LOL…

No, I’m glad Jack had success where I failed. At my screening Matt was so rude, not even looking over at people. Maybe he was just burned out, but I’ve heard worse and worse things about people who have met Matt Damon lately. He’s become very hit and miss!

Check out Jack’s encounter with the Good Will Hunting star after the jump!

Academy Award winners rule. Since I started collecting there have only been a handful that were not fan-friendly, most notably Sean Penn (who was slightly inebriated and still dating Scarlett Johansson at the time) and Mel Gibson. Besides those two, almost everyone else has been pretty friendly, even some “bad signers” like Charlize Theron (who I met twice!) and reluctant/private individuals like Charlie Kaufman. However, Mike wrote something disturbing …Matt Damon was not friendly at a recent screening .

I was extremely worried since he is one of my favorite actors and consistently ranked as super fan-friendly. Also I happened to be attending a members screening of “Promised Land” with him, Gus van Sant and John Krasinski. Now I had already met Gus van Sant before and he was super laidback, but had never met John Krasinski or Matt Damon before. Still I felt pretty optimistic considering my 90% success rate for Academy Award winners (with over 30 individuals). But as anyone can tell you, nothing is a guarantee, especially with autograph collecting.

My friends and I recently obtained some passes to see “Promised Land” at the LACMA as part of the Film Independent series. Unlike my friends I was genuinely interested in checking out the film and could hardly wait, especially since MATT DAMON would be there. For the past decade I have slowly been assembling a cast signed mini poster of “Jay And Silent Bob Strike Back.” Presently over 10 people have signed it including Wes Craven, Carrie Fisher, Shannen Doherty, and Shannon Elizabeth besides the titular characters. 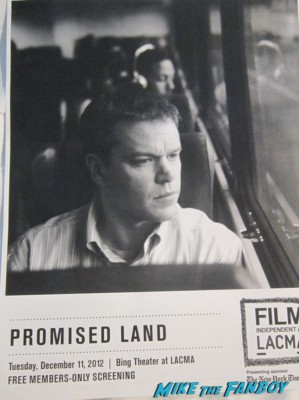 To say it has been challenging is an understatement, but fun nonetheless except Shannon Elizabeth who was a B*** (I had to convince her and her handler NOT to charge me DOUBLE because I DIDN’T WANT IT PERSONALIZED at AN AUTOGRAPH SHOW. I took a stand and refused to pay double at AN AUTOGRAPH SHOW for her autograph. So for everyone who didn’t have to pay double for NON PERSONALIZED ITEMS at the Hollywood Show- You’re welcome! Sorry, she just was not nice at all meeting her fans in a low key autograph environment where FANS HAD TO PAY FOR HER AUTOGRAPH. So forever she will be a “fake” fill in the blank to me and used to like her).

So I decided to bring my mini poster and an action figure for Matt to sign along with DVDs for Gus van Sant and John Krasinski to sign (“Restless” and “Smiley Face” respectively). I also hoped Gus van Sant could sign the poster as well since his cameo is priceless in “Jay and Silent Bob Strike Back.” It’s always better to be over-prepared than underprepared. Days before the event, my friend David bails due to car trouble and instead I invite my friend Joyce.

6:30- Arrive at the LACMA after making great time and call Joyce to let him know I have arrived. He is already waiting in line.

6:40- Pick up tickets and get into the actual line. What sucks about screenings at the LACMA is it’s a complete crapshoot with lines forming. There have been times the line was wrapped around the building while others barely anyone was waiting. Tonight it’s the former. Joyce and I are waiting literally in the back of the building and we are shocked it’s this packed.

6:50- As we’re slowly moving, everyone around us starts describing their Top 10 lists, including us. It’s amazing what people consider the Best Picture (someone even said “Skyfall”), but it was still fun nonetheless.

6:55- As we approached the front, we noticed about a half dozen security guards waiting in the front. This does not seem good at all.

7:00- Arrive inside and pick the last two seats in the front row. After picking our seats, we take off for the bathroom and slowly reminisce about films released this year. 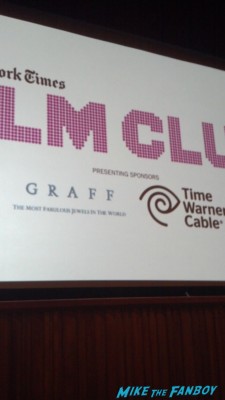 About 7:30- Introductions are made by Elvis Mitchell and mentions who will be at the Q&A. When he says Gus van Sant in the microphone I’m literally the only one clapping and Elvis acknowledges me saying, “Yes, it’s okay to clap” with a big smile. Suddenly most of the audience slowly joins in and were especially loud for Matt Damon. The film then starts. 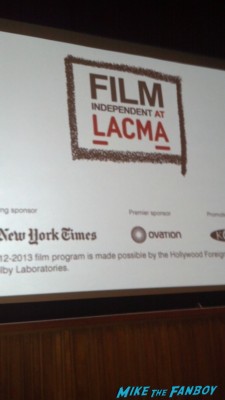 The film ends 10ish and Matt Damon is the first one introduced. Then John Krasinski and Gus van Sant quickly come out before Elvis has time to even introduce them. I have to say, John Krasinski and Matt are as charming, if not more so, than their film/TV personas. They were so funny.

Some of the cool tidbits revealed during the Q&A are as follows:

-Scoot McNairy and Hal Holbrook were cast by Gus van Sant while everyone else had already been selected including Frances McDormand.

– Gus van Sant had approached Matt at one point to make “Brokeback Mountain.” Matt responded to Gus along the lines, “I just played a gay l killer in ‘Talented Mr. Ripley’ and now I’m about to play a cowboy in ‘All The Pretty Horses.’ I don’t think I want to play a gay cowboy next,” which drew the greatest laughs. Shortly thereafter he praised Heath Ledger’s performance and, “Sometimes it’s just not meant to be due to scheduling conflicts and that’s okay because the people who replaced me did fantastic jobs.”

-Matt Damon was supposed to be Dan White in “Milk.”

-John Krasinski met Gus van Sant at a SAG event around the time for “The Curious Case of Benjamin Button” and was extremely nervous meeting him (or as he said “sick to his stomach”) from being so nervous. Whenever asked which filmmaker he wanted to work with the most, John always said Gus.

Once the Q&A ended, John Krasinski and Gus van Sant were pretty relax getting up, but slowly snuck out signing a handful of autographs (maybe one or two each).  I was blocked by a few people, but I wasn’t disappointed since meeting Matt was my main goal. 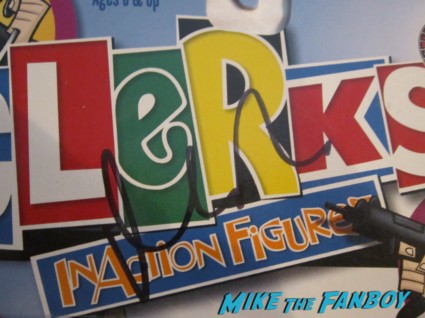 Matt started signing a few autographs when his handler tried pulling him away saying, “They need to attend another screening tonight” instead Matt continued signing and actually started answering questions. I managed to get my action figure signed and Matt gave me the biggest smile. I thanked him and people behind me started throwing their items into the mix as his publicist really started emphasizing “He has to go.”

He signed for another minute or two with a nice crowd surrounding the stage. Matt was leaning down and continued signing for fans. Unfortunately due to strict security I was unable to take any pictures. In a few cases, people were actually escorted out of the theater due to flash photography plus it was a cattle rush just leaving the area. It was virtually impossible to even lift one’s arms let alone take pictures so I apologize for the lack of good photos.

Finally, I can now take Matt Damon off my autograph wish list. The autograph I received was okay, but the memory is well worth it. I almost attempted to get my mini-poster signed, but people were really being aggressive extending their arms in every direction. I didn’t want my poster crushed for a “scribble signature.” Still I got to meet MATTTTT DAMOOOON! Until the next time, happy autograph hunting! 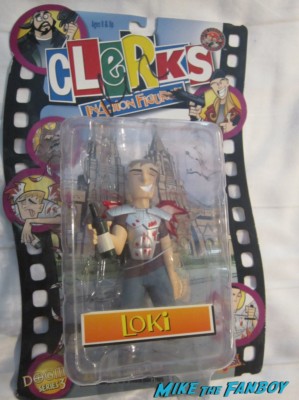