Woo hoo! As promised Billy Beer has done an awesome recap of James Franco’s walk of Fame star ceremony! I wish I could make it to some of these walk of fame’s however work and duty call.

Billy was lucky enough to meet Sam Raimi, James Franco but missed Seth Rogan. doh! Honestly, I do love these Walk of Fame ceremonies they are old school Hollywood and in a land with no traditions, it’s fun to be a part of a long honored Hollywood tradition.

Check out Billy Beer’s recap after the jump!

Welcome back to Billy Beer’s Barstool.  Today we are off to Hollywood Blvd.  No not to go to Hooters or Buffalo Wild Wings for Happy Hour, that starts at 2 and 3 p.m.  It’s actually too early for that. We are off to Mr. James Franco get his star on the Hollywood Walk of Fame.  Now James does have a number of acting credits and award nominees to justify this honor.  But the truth is, they are probably trying to bump up the press for his big movie coming up Spring Breakers.  What?  He’s in another movie coming out this week?  Oz?  A big budget Disney movie?  Well I’m sure they’ll mention that too.  Let the adventures begin. 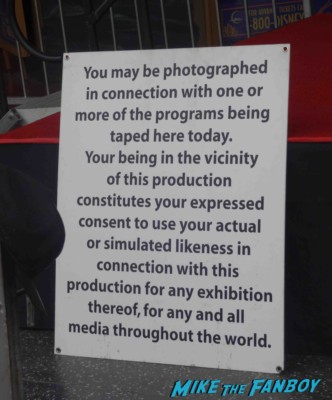 I get there fairly early to get myself a good spot on the rail.  Last time I ended up with a tree in the way to block a lot of my view.  Plus I missed James at the Oz Premiere cause people decided to put their stuff on top of mine to try and get their 3rd before I got my first.

I’m not sure who else might be attending.  He has 2 movies coming out here in the next few weeks, so there could be a number of co-stars attending.  Michelle, Mila, Vanessa, Ashley, Selena, any of these ladies would be fine.  The 2 people I know for sure that are going to be there are Seth Rogan and Sam Raimi.  Seth has been hard as of late, and I missed Sam chasing after Michelle and James at the Oz Premiere.  I was also told that Carla Gugino was going to be there.  Not sure why, but I ran to CVS to print off a couple of pics I had of her so I could get them signed too.

There’s already a small crowd there when I arrive.  A lot of ladies love them some Franco.  When they finally put the rails up, I get myself a good spot.  I’m by the chairs where the family and guest sit.  As they are setting up the rest I notice this might be a little harder to get graphs than I thought.  Mother Nature is not agreeing with us.  They actually put up tents that are going to block my view a little bit.  Grrrrrr.  While we’re waiting, it actually sprinkles a bit too.  I actually brought an umbrella this time.  Check out the big brain on Billy!

Instead of a steady flow of people showing up, they all arrive at once through one of the stores.  There’s James, 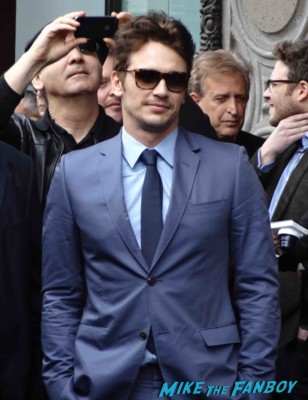 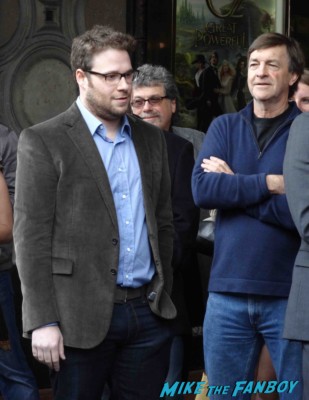 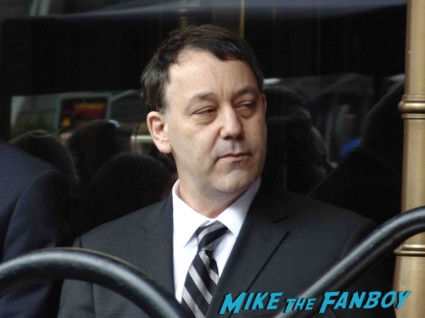 and the only other person I see is Joey King.  DOH!  Oh well, I still really need James. 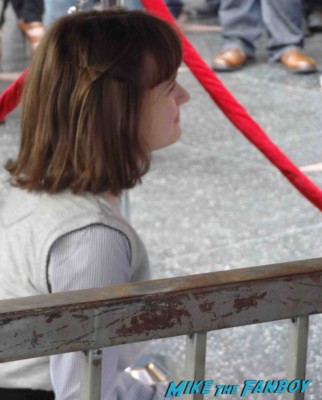 Sam is the first one to talk.  He tells a great story of James basically worshiping himself.  It’s obviously made up and over the top, but it got a number of laughs.  I enjoyed it. 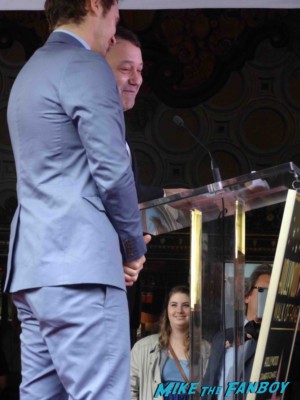 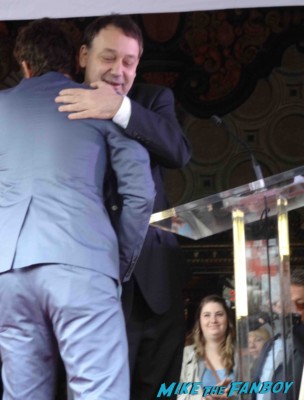 Next up was Seth.  Seth made a number of joke as well, basically putting himself down, and talking about smoking pot.  There were some funny moments, but it kinda sounded like he was practicing his improv. 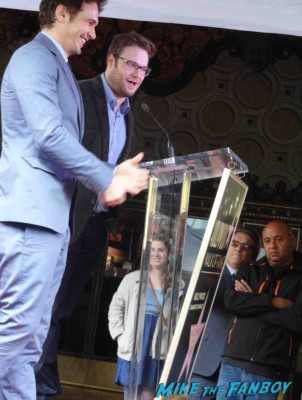 James came up next, and I really didn’t know what to expect.  You see him play these different roles, and you’re not sure who the real James Franco is.  Today, James reflected on all the people that helped him.  He talked about his teaching of film to students.  It was quite the emotionally charged speech.  Not what I really expected after the first two speakers.  He seemed honored to be getting his star which was nice to see. 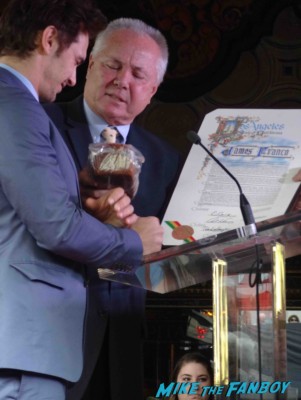 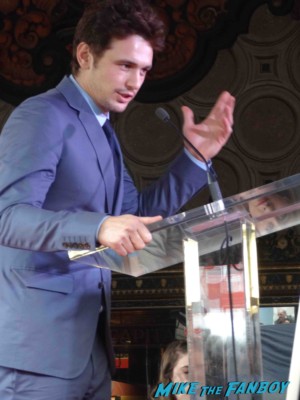 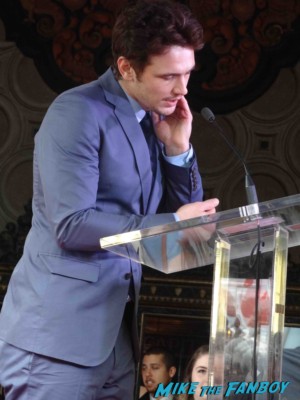 Now it was time for the pictures and interviews.  After the first round of pictures, Sam and Seth start walking our way.  We call out for Sam who came straight over. 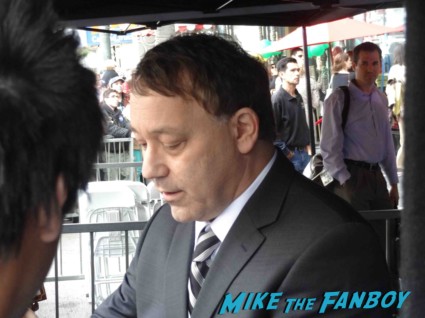 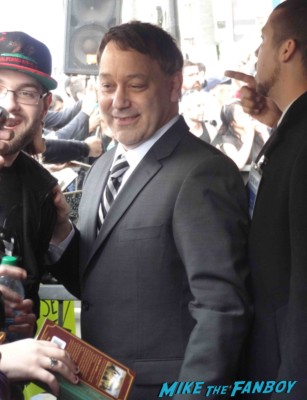 I had forgotten my Army of Darkness poster at home, but someone was nice enough to give me one of their extra Evil Dead poster.  Again, MANY thanks!  Sam is a fellow Michigander, so I was excited to get him. 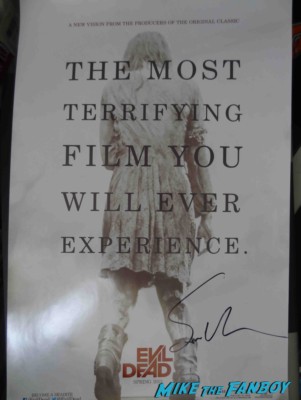 After Sam signed we started looking for Seth……No where to be found.  Dude just bolted.  Would I say I was surprised?  Not really.  He’s been flaking more and more.  Joey is now walking away.  A couple of people call for her, but I hate bugging little kids.  She leaves, now we’re just waiting for James.

James come straight to our section first.  I hold out my big Spring Breakers picture first.  He’s quiet, but he’s a machine. 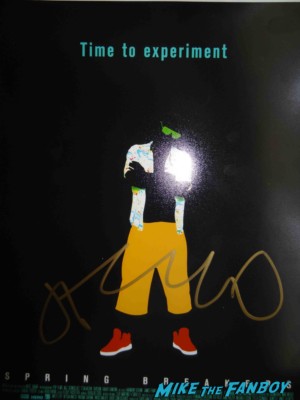 He was pretty much signing everything you had, unless you were holding a 8 x 10 of Pineapple Express.  then he was skipping it multiple times.  Oh wait, that’s what I had.  Oh well, I had a couple of more things for him, but I held out the wrong picture. 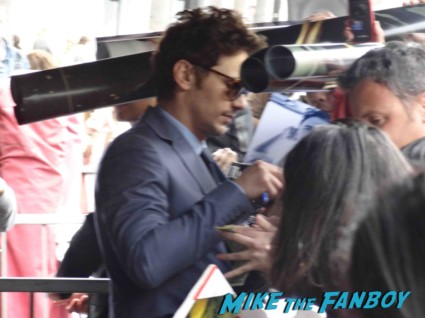 He keeps going and going. 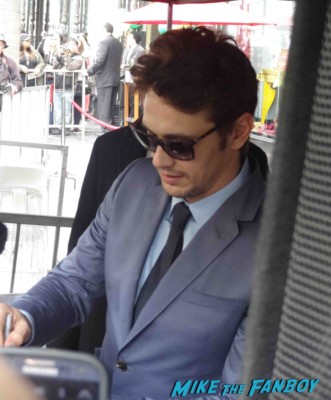 Believe it or not, he actually comes back to our section.  This time I hold out my other 2 pictures.  He signs them both and then again I put out my Pineapple Express pic.  And again he skips it.  It’s not to be.  I’m still super happy. 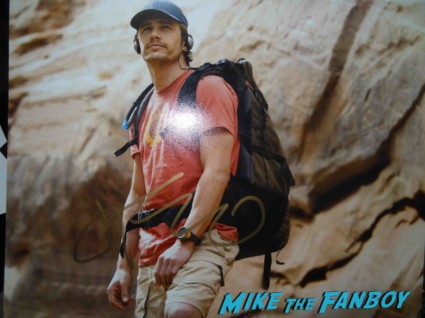 James came through big time on his big day.  I don’t think there was a single fan there that left disappointed with him.  Well, 2 more hours till Happy Hour.  So I guess I’ll wait it out.  Till next time. 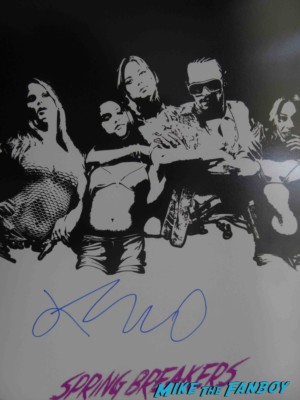