I was just watching Where The Wild Things Are and I just kept thinking about James Gandolfini. I thought for this weeks Throwback Thurs, I would share one of the most fun days out and about. Pinky and I met him back in May of 2011. It was after a performance of God of Carnage and he was so nice.

Like Pinky said, in her recap he played with her dog and was just the nicest guy. He was such a big guy, but based on that one night when we met him, he was just a teddy bear.

Check out the flashback after the jump!

Okay, this is such a random night… Tonight is the final performance of God of Carnage at the Ahmanson Theatre in Los Angeles, and Pinky got a tip that 1980’s icon Ms. Julie Brown was going to attend… Ah Twitter… Anyway, this is the Just Say Julie, Julie Brown not the Wubba Wubba Wubba Julie Brown… I digress; I really wanted to head downtown for Jeff Daniels and James Gandolfini. Plus, I love Hope Davis and Marcia Gay Hardin, so… For the love of our random 1980’s icons off we go!

5:54 p.m. – Pinky and I just arrived with Sammy in tow. Sammy being her cute as Marky Mark puppy, named after Sam Trammell from True Blood… Yep, I tease her about it all the time!
As I rightfully should…

5:59 p.m. – A bunch of people are going in, and Pinky has spotted a couple random people already. I swear she is like eagle eye…. She says something like, “Did you see that guy, and he was in episode 17 of Blossom as a milk man!” I’m like… yeah, don’t need him…

6:11 p.m. – Christopher Lloyd just arrived and I’m freaking out… Clue the Movie! And I don’t have anything with me! Dying… He just said no to another collector. Wow, not a nice man…

6:39 p.m. – The play has started and the doors are closing… no Julie Brown, oh well… So, Pinky and I have decided to wait and see if we might have missed her. Plus, I want the cast so we need to hang out for a little bit. 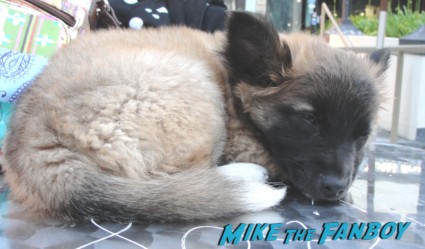 8:24 p.m. – We are at the stage door, and are waiting… Maybe Julie Brown will come out this way? Okay, we are hoping…Christopher Lloyd is leaving and ignores everyone. Pinky asks for a photo and he doesn’t acknowledge her presence.

8:29 p.m. – Oh crap, there’s Patrick Fugit! He was the lead in Almost Famous which is one of my favorite movies of all time! I love love love it!
  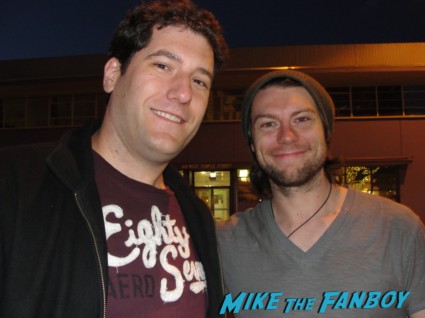 Patrick Fugit is so nice! I got a quick photo with him and he was more than happy to oblige. 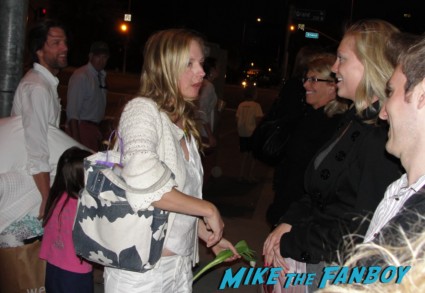  
I got her on my God of Carnage program and on my About Schmidt mini poster that I’ve been working on since 2008. lol…
  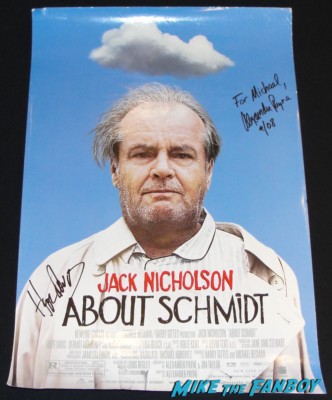 8:41 p.m. – Oh crap, there’s Jeff Daniels! Jeff is the other reason I’m down here because I want him on my Pleasantville poster.
  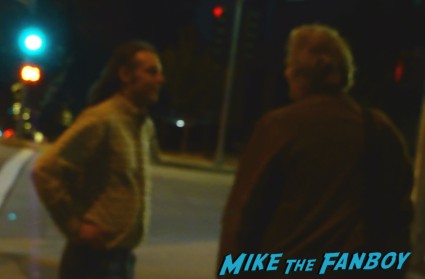 I already have Reese Witherspoon on it from the How Do You Know premiere… Jeff Daniels is nice, but Pinky just asked for a photo and he said “No, but thanks for asking.” I told Jeff Daniels, that the Purple Rose Theatre was one of the first plays I have ever seen. He stopped and looked at me and said, “Thanks for that, really.” I thought that was really nice.
  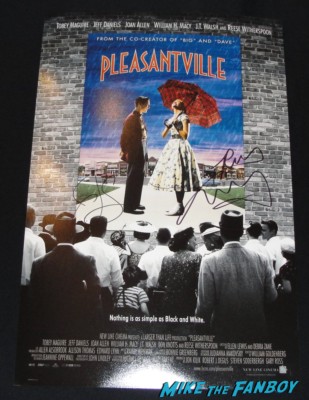 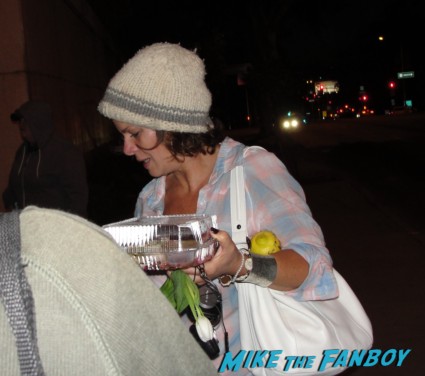 She signed my Whip It mini poster and program and then asked me if I would like her daughter to sign my Whip It poster because she was in it as well.

I was like sure! So, Pinky and I walked with Marcia Gay Hardin around the corner and to her car, where she had her daughter get out of the car and sign my poster. I was like… Wow, that was awesome!
  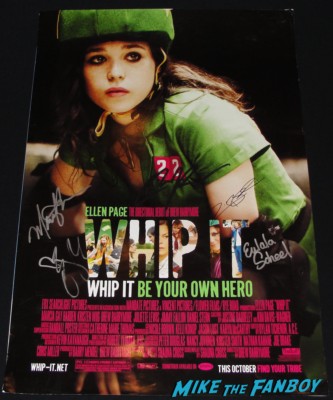 He comes out and starts to sign autographs and take photos with people… Wow, Tony Soprano in the flesh.
  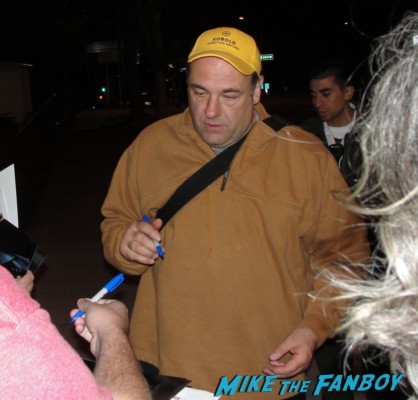 There are some undesirables lingering about but otherwise it’s a pretty mellow crowd. James Gandolfini gets to us now, and signs my Where The Wild Things Are mini poster and God of Carnage program and then I get a photo with him. Pinky has James sign her program and then James says, “what’s that!”
  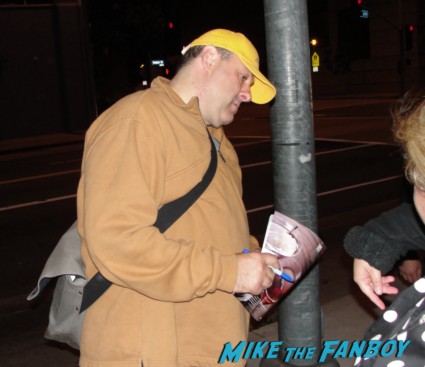 Pinky says, “Oh, it’s my dog Sammy.” James says, “Can I see it?” Then James Gandolfini holds Pinky’s dog and walks around with him.
  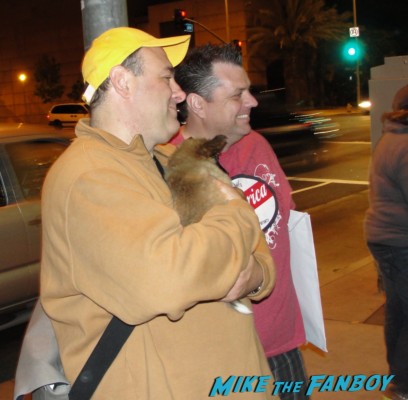 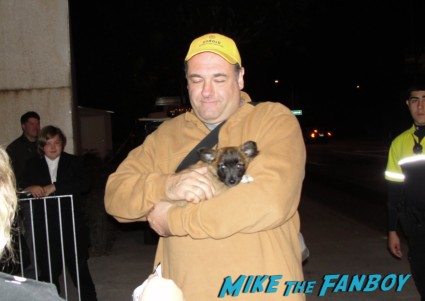 Lol… He takes a photo of Pinky with the dog, and then continues to hold the dog LOL…
  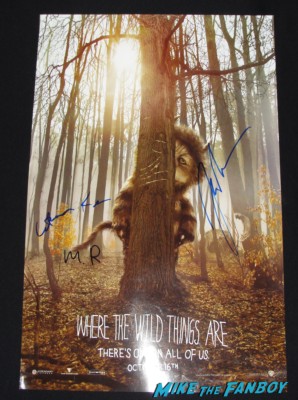 8:54 p.m. – James Gandolfini then gives Sammy back reluctantly, lol… I really think that he loved Pinky’s dog! Lol… Too funny! 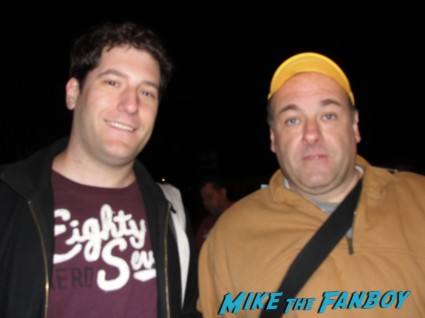 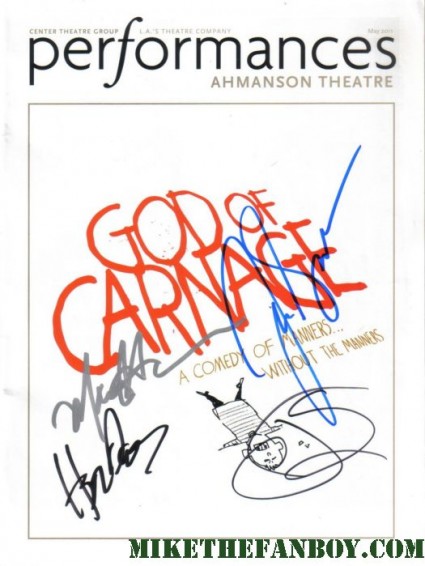 Okay, so I tweeted Julie Brown and she tweeted me back! So excited!