It’s almost October which means the leaves are turning orange, candy is coming out and it’s beginning to look a lot like Halloween!

Halloween? What… A lead in to an article! Nooo… Charles is a huge horror fan and he headed out to meet none other than Laurie Strode herself, Ms. Jamie Lee Curtis. Now, Jamie Lee Curtis hasn’t always been the friendliest person in the world but I think she’s softened up since Scream Queens premiered… Or I would like to think so.

Regardless, Charles had an awesome time at her book signing recently!

Since I first experienced the Mall of America, shortly after it opened its doors in 1992 (with a commercial proclaiming, “There’s a place for fun in your life! The Mall of America!”), there has been little incentive for me to visit the bustling temple of commerce outside of the two separate occasions I was employed there. It was only after finding out that Jamie Lee Curtis would be stopping by on Friday, September 23rd to promote her new children’s book that I realized I had to brave the raucous mall so I could meet one of horror’s premiere icons. 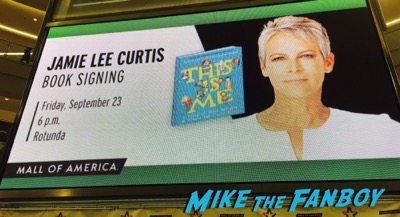 I arrived to the mall around 3 P.M. and noticed the usual buzz of Friday activity, intensified by the dreary, drizzling weather outside. I made my way over to the rotunda and found my place behind the small congregation of folks already assembled. Immediately, I received a compliment by a fellow fan on my T-shirt, a depiction of the sinister pumpkin skull from Halloween II. As I surveyed the rest of the group, ranging in age from 6 to 60, I took note of the fact that, so far, I was the only one present visibly honoring the beginning of the actress-cum-author’s career. As I overheard parents behind me explaining to their two young daughters who Jamie Lee Curtis is, I internally winced when I realized their only spark of recognition seemed to come from the role she voiced in Beverly Hills Chihuahua. It dawned on me then that if I were looking for more fellow horror comrades, I was probably in the wrong place. 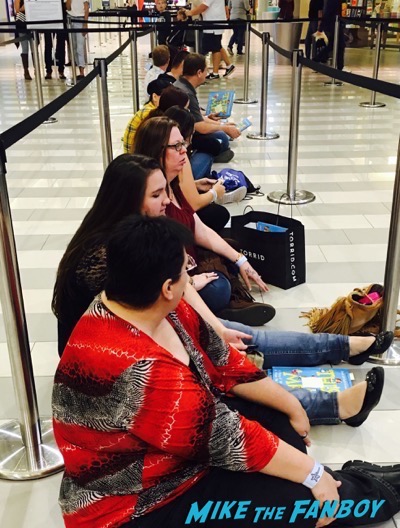 Around 4:00 P.M., the staff of Barnes & Noble wheeled out two carts: one with a cash register and the other packed tightly with copies of the book with little post-its sticking out from the top. When the sales area was finished being set up, the first group was ushered over to make their purchases of the book.  After their transaction was complete, I noticed several eager people ducking under the maze of dividers to get to their place in line at the front of the stage that much quicker. I giggled at the silliness of the act, but I certainly appreciated their enthusiasm.  When it came time for me to take my place by the stage, however, I traversed every twist and turn.  So what if I arrived a little dizzy!  I couldn’t resist sauntering over in my best supermodel walk to the beat of a nondescript pop tune blaring from the speakers flanking the stage.  It’s just something ya gotta do!  Am I right?

Arriving so early to these events to get a good place in line, sometimes it can get a little dull waiting for the action to start. That’s why enjoying the act of people watching comes in handy. At this point, I was still hoping to see another horror fan. Just as I was about to give up hope, a newcomer joined our expanding line. I observed him putting a couple of items in his book. One item, which caught my eye right away, was an 8X10 glossy of the original Halloween poster, and the other was another 8X10 of Jamie Lee, Nancy Loomis, and P.J. Soles. I noticed they both had autographs already scrawled across them. It was at this point that he noticed me noticing what he was doing. With a mischievous grin, he held up picture of the poster and mouthed “John Carpenter.” I responded that I wish I were that brave because, of course, at these events items other than the book are strictly forbidden. 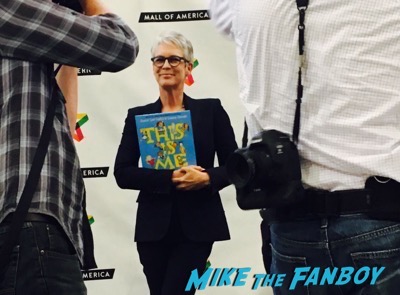 At about ten minutes to the appointed arrival time of 6 P.M., with the stage thoroughly inspected by a K-9 unit and several security personnel stationed all around, Ms. Jamie Lee Curtis surprised us with an early arrival, sparking an echo of applause that rang throughout the rotunda. Introducing herself as plain ol’ “Jamie Curtis from Los Angeles, California,” she revealed, in the midst of a phenomenally successful film career, that for the past 26 years she’s enjoyed an equally successful secondary career as a best-selling author of children’s books (not bad for someone that scored a combined total of 840 on her SATs). The inspiration came in the form of her then-four year-old daughter, Annie, when she, “…said something funny. I wrote it down. It made me laugh and cry, and then the next thing I knew, I…it was a book.” Her most recent book, This Is Me: A Story of Who We Are & Where We Come From, tells the story of a teacher explaining the concept of immigration to her class by showing them the small case her great-grandmother packed, per her parents’ instructions, “…with the things you LOVE best…” She then issues a challenge to her students to take the case home, make believe they are immigrating to a distant land, and come back to class with the cherished items they’d bring in this case to a new land (the book even has a nifty little pop-up case at the end). 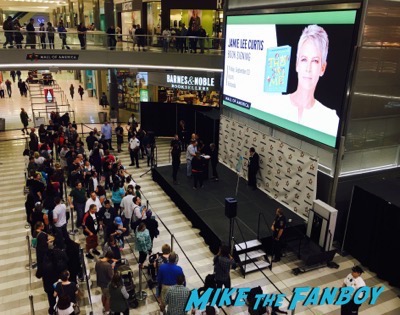 Before the signing commenced, she fielded a few questions from the audience that prompted her to discuss her famous parents, including the technical advice she received from her father, Tony Curtis, which was to avoid being shot “…with anything less than a 50, which means a 50mm lens, because a wider lens than a 50 would distort you.” Jamie, however, didn’t heed this advice because, as she joked, “…my face is the size of a door wedge.” Additional questions revealed she’ll be directing some upcoming episodes of the second season of Scream Queens (she’ll be helming her first episode in about 2 weeks), and, perhaps the question I was waiting most for someone to ask, a curious fan wanted to know what were her two favorite films that she appeared in, which were True Lies and…FREAKY FRIDAY!?!? Love Freaky Friday, but was sad that Halloween got no love. Maybe she’s still bitter about Halloween: Resurrection, and if she is, I don’t blame her. I think most of us fans are still smarting on that one.

Jamie Lee finally decided to get down to business and sign some books. The line started moving pretty rapidly with the instructions being fired out at just as rapid a pace. The larger post-its with our personalization were to go on the left of where she would sign, books were to remain open with the smaller post-its discarded, and camera phones ready (all iPhone users were requested to have the Chrome filter chosen). Jamie Lee boasted that she takes great selfies and I observed her taking all pictures with fans herself. No offense to the actress and her selfie-taking abilities, but I usually abhor the practice of taking them as I hardly ever come off looking great, what with the positioning of the phone, forcing a smile, and I still haven’t mastered where to look.

In all my time of attending signings, conventions, autograph events, etc., I’ve learned to become less anxiety-ridden when meeting celebrities, but there’s something about attending these Mall of America signings that just brings on the nerves. Perhaps it’s the crowd and having to actually walk onto a stage to have your meet-and-greet that creates such a pit in my stomach, turns my legs to linguini, and makes me feel as though I may trample up those three, small metal steps. It’s usually at this point that my mouth goes completely dry and I start wondering if my breath smells bad.

As the person ahead of me exited the stage, I walked over to Miss Laurie Strode herself. She beamed, “Hi! How are you?”

“I’m great, thanks! How are you?” At this moment, due to nerves, I really don’t recall her response, but I guess she would have to be doing quite well to be in the biggest mall in the country autographing her latest book.

While scrawling on my book, she looked down at my shirt and said, “Halloween fan, huh?”

“Yes, very much so!” Really? Am I a horror fan, or Queen Elizabeth II (well, she IS Lady Haden-Guest)?

I’m sure there were a thousand things I could have said and about a million things I could have asked, but before I knew it, Jamie Lee ushered me to center stage for our selfies. Grabbing my phone, she through her arm around me, smiled (I made my attempt at smiling), and, with a few presses of a button, I had a handful of selfies taken with a celebrity, by the celebrity. Looking back at the pictures now, they don’t look so bad. 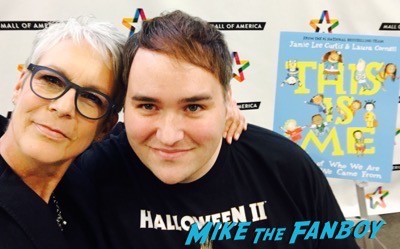 After my moment with Jamie Lee, I stayed around a little while longer to soak up the atmosphere and snap a few more pictures. Eventually, the fan with the contraband photos stashed in his book made his way through the line. He looked far more nervous than me, and when I asked him if she signed the photos, he said he didn’t have the courage to go through with it.

All things considered, I’d have to say this was a genuinely positive experience. I understand others who’ve had the opportunity to meet her haven’t been so fortunate. Perhaps it was the setting and the occasion that brought forth a kinder, gentler Jamie Lee Curtis. Either way, I consider myself very lucky to have met an individual that can be considered a living horror legend…even if I had to buy a kiddie book to do it. 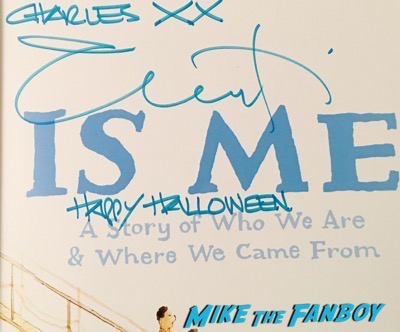