Home / Big Mike • Fanboying! • Jekyll or Hyde! • Stars of the 1980's and 1990's / Jamie Lee Curtis Scares The Sh*t Out Of Big Mike But Still Signs For Him! Halloween Goodness! Laurie Strode In Person! Autographs And More!

Jamie Lee Curtis is always a little testy… And Testy she is. I’m not sure this qualifies for a jekyll or hyde, but Big Mike… He got to meet Halloween star Jamie Lee Curtis, but only after she scared the living crap out of him!

She can be quite a testy one!

Hey kiddies, how the hell ya been? It’s been a lil’ while since I last posted so I thought I’d drop a quick line. It’s now officially Halloween season (It starts just after mid-September now for some reason. I’m now hanging my Christmas stocking the second week of October to keep up the earlier trends that we’re letting the retail world set for us.) Anyhoo, I noticed that there was a Q & A with Jamie Lee Curtis.

Whoa! Jamie Lee Curtis? That’s two public appearances in one year. She never does that. This was to be held in Santa Monica. Now, I was extremely lucky to get her just this very last May on a Michael Myers mask and a “Halloween II” poster. Upon showing said mask to my honey she posed a very icy “Why didn’t you take my mask to get signed? That was pretty much the end of that newly signed mask in my collection. Truth is, I completely forgot she had a mask. I also wouldn’t want to ask Ms. Curtis to sign two masks because that makes me look like a dealer and no one likes them. She’s hard enough to get and she never seems to like signing “Halloween” stuff as it is. I always get a slight case of anxiety in her presence. Not many people can make me feel as uncomfortable as she does, no wait, she’s the only one who can make me feel uncomfortable. I don’t know why. I’m pretty sure she’s okay with it, too.

I was unsure whether I should buy a ticket to the event and try afterwards or try and ask her on the way in. Just in case, I wore a pair of my sexy jeans and a nice dress shirt and snuck out of work early. I figured I’d give myself two chances to upset her at the sight of an eager “Halloween” fan. I always prep myself for the worst with her even though I’ve only “met” her twice before in the past four years. (I’m sure I’ve mentioned it before in my Streak Week post.)

I arrived a half hour before the reception was to start. I parked close to the building and didn’t notice any other fans or dealers around. Never a good sign for my luck. I chose a spot to stand where I could see both entrance/exit points. I had decided on bringing two DVD insert slips for “Halloween II” and “Halloween 7” and my honey’s former Michael Myers mask. I may never have this opportunity again so why not go for broke?

I triple-checked my items and placed them in a bag so no one would see what a dork I was. I wasn’t there long before I noticed Ms. Curtis pulling in the lot. It would soon be “go time”. A couple of ladies went out to greet her and stood about twenty feet from where I was standing. My mouth was starting to dry at an accelerated rate. I would have to wait for a break in their conversation before attempting to ask. It’s never nice to interrupt and that goes double for when it’s JLC. Instead of a break in their conversation they decided to take a small tour of the grounds.

What felt like half an eternity was probably about ten to fifteen minutes later before the ladies made their way back. From about forty feet away Jamie slowed down and was looking directly into my eyes staring me down. It was quite an intense stare as I could feel both of my balls cowering and trying to climb back inside my body to quiver in the fetal position. The ladies kept ahead and Jamie started to turn to go into the building before I finally asked if she would mind signing a couple of items.

“What? She said, annoyed. I asked again. “What, Halloween?”, she said more annoyed and a little disappointed. I shrugged and in my soft-spoken voice said “Yes, if that would be okay with you. I don’t want to disturb your evening.” She scoffed a little. I was losing her. “I could come back after if you’d like.” “No, lets do it now. I want you outta here.”

I got the approval I was praying for and got my items out and approached her. I had her sign in a red paint pen on my three items and thanked her and told her I really appreciated her signing for me. 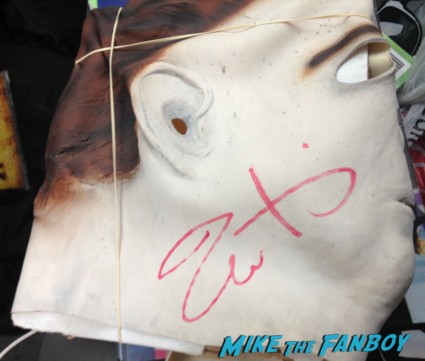 “Ya, ya, ya!”, she said with a heavy tint of annoyed cynicism. I doubt it was her intention, but I really felt like a piece of shit. 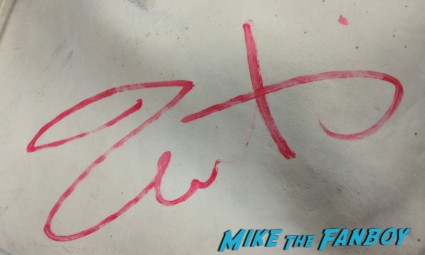 I’m happy to have the autos and I will always be a “Halloween” fan as well as many of her other flicks, but I hope I never want her autograph again. That was a bit harrowing. I had told my friend aboot her appearance because his wife needed her on her Belgian “Halloween” poster. He couldn’t get down there to get her on the way in, so I waited for him to get there to ask her on the way out.

Granted, I moved my car on the other side of the lot so Ms. Courteous wouldn’t have her evening ruined by seeing me again. It’s like we dated or something. I’m really glad I didn’t buy a ticket to the event. I would not have gone in after that awesome and unpleasant encounter. My buddy, however, truly needed her for his wife’s poster. He’s not really a grapher so it was my duty as a bud to stick around and wait for him and instruct him what to do. I was very nervous for him. For one, he and his honey had been trying to get that damn poster signed by her for a while.

Second, he had to get to this place from the Valley, which can take a while if traffic isn’t on your side. When he arrived I got in his car and parked in the first spot available, which was about thirty feet from the door. With his pen prepped, I told him the best place to stand and just like that the doors opened and people were exiting.

Good timing, as he’d only arrived aboot ten minutes before. I noticed JLC walking out and told him to get moving before cowering with the seat all the way down and out of view. I felt like a spy hiding from the Cold War Russians. It was a bummer that it had come to this. I even noticed a buddy walking out of the event that I would’ve loved to say hi to, but couldn’t. How traumatizing. I’ve already popped, like, three Zolofts since I started writing aboot this. I watched as sneakily as I could and noticed Jamie had gone back inside. My buddy moved closer to the door and waited patiently. This was an odd-sized poster and there was no hiding that it was “Halloween”. Jamie walked out of the building again and walked past my homie. I saw him get her attention before I ducked down in case of explosion. I didn’t hear any dissent so I peaked up and noticed her signing the poster slowly. “Yes!” I yelled before ducking down again. She seemed to be much nicer this time around. I was very happy for my buddy. This would be a nice surprise for his wife. My bud placed the poster in the back seat of the car as carefully as he could in the dark because I was covering the light with my hand. I was still a little nervous. I asked for the lowdown and he said he asked if she’d sign the poster for his wife because it was the last one she needed and she said “Sure.” She even wrote “Happy Halloween” above her signature. Whew.

That encounter could have gone in an entirely different direction and I’m glad it didn’t. This was a really nice guy doing a really nice thing for his honey and I would’ve felt so awful if she didn’t sign for him. I was just a nice guy doing something nice for myself, except I’m not sure if the “Halloween 7” DVD is mine or my honey’s. (I think it’s hers and now she has a cute little autograph on it.) Anyway, all’s well that ends well. I’m happy I got my “Halloween” shit signed even if asking Jamie Lee Curtis to sign it is scarier than the damn movie itself. (My shakes have finally just gone away and one of my nads finally decided to pop back out.)

Remember, always be respectful of the celebs you approach whether they sign or not. You could only be making things worse for yourself and others in the future. And have fun out there! Happy hunting. 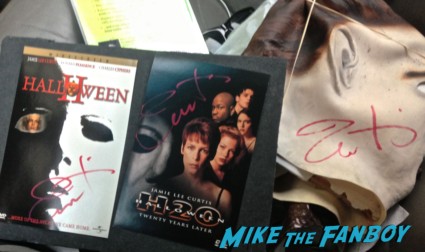 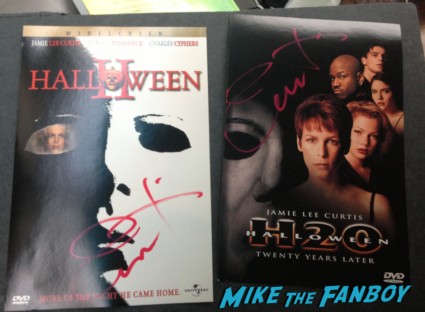