Home / FANBOY FAIL! • Fanboying! • Jekyll or Hyde! • Suddenly Susan / Jekyll or Hyde! Pierce Brosnan Looks At Susan And Says, “That’s It!” Hey 007 I Know Someone Who Wants To Shake And Stir You! Doh! Autograph Fail!

There’s one thing about Suddenly Susan, she doesn’t mince words. When she’s not happy, she lets you know. She lays it straight and like that. No second guessing. She thinks you’re being a jerk, she says “You’re being a jerk.” Love it!

And today, that jerk is Pierce Brosnan. Now, I’ve never met the 007 star even thought I need him on my Mars Attacks mini poster. I’ve heard he is hit and miss but you just never know right.

This encounter though… Shew… It’s just rude. And Shew… It’s not even a word, but that’s how rude Pierce Brosnan is. He needs a made up word to describe his rudeness.

So, Shew to you Pierce Brosnan!

And check out todays Jekyll or Hyde after the jump!

I’m speaking of none other than Mr. Pierce Brosnan. I’ve had a bit of a crushy crush on him since his Remington Steele days. He’s actually gotten sexier with age. His acting skills are still pretty much the same, in my opinion. His performances always leave me with a “meh” feeling. He tries though, God love him.

When I saw he was doing a talk show appearance, I jumped at the chance to wait for him. I’ve never heard a bad word about him signing. I expected a gaggle of dealers, due to his Bond prowess, but to my pleasant surprise, only ONE dealer showed up after me. We chatted a bit and neither one of us had a concrete handle on what kind of signer Pierce was suppose to be. 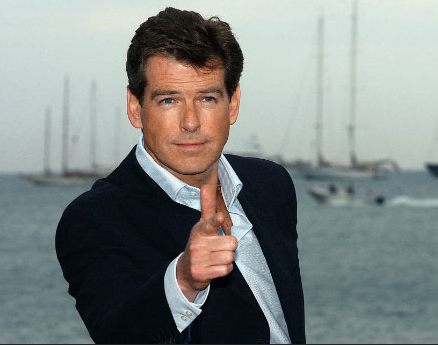 After a short spell, his limo came out and as luck would have it, they hit a red light exactly where we were standing. Of course, this seemingly nice dealer, who had gotten there some time after me, rushes forward. Even when you meet a decent dealer, much like when an airplane lands, the friendship with the stranger you’ve been talking to for eight hours is over.

Pierce was in the back seat and the window was down. Stroke of luck number two. The dealer literally shoved his 11×14 Bond photo into the car! Pierce who stared forward the entire time and looking quite annoyed, lifted his hand as if he were holding a pen. This apparently, was a signal for him to be “penned”, which the dealer quickly obliged. Once the dealer backed out, I stepped up and said, “Hi Mr. Bros…” and was briskly cut off with him saying “that’s it” and waving his hand to usher me away. The window went up, and Mr. 007 drove off.

He signs for one, but not two? I have to admit, if the window had not been down, I don’t think that dealer would have gotten anything either. Still, what’s another 5 seconds when you already signed for one person?
So, boo, hiss, and more boo for you, Mr. Pierce Bond.

On this day, the verdict was definitely Mr. Hyde!

For his Douche-ness Pierce Brosnan is awarded the Angry Theo!