The awesome thing about the Jekyll Or Hyde is that you just never know what you are going to get! Suddenly Susan had a really bad encounter with Pierce Brosnan before and then… She meets him again and had success! Who knew!?!

It’s that kind of fun that makes this hobby awesome and frustrating. LOL…

So, without delay here is Suddenly Susan’s report on Pierce Brosnan part deux!

I noticed Pierce Brosnan is doing quite a bit of plugging next week for some upcoming movie. I wanted to give anyone who might be trying for him some hope. Now, you’re probably saying, Suddenly Susan, you ripped Pierce a new one a few weeks ago and gave him the Angry Theo award. It’s true, I did. But, that’s the fun of the Jekyll or Hyde column – you just never know which persona you’re going to get.

After my colossal fail at getting Mr. Bond, I still decided to give it a try some weeks later when he was making another talk show appearance. I arrived early and we were lined up on the single file side of the alley. Not too many folks – maybe a dozen or so. When Mr. Brosnan arrived, his limo pulled right up to the door. Not a good sign. He went inside without a wave. We waited for the exits, and did the exact same on the way out. Skunked again!

Luckily, one of the cooler, nicer collectors out there told me there was small screening and Q&A for the movie
Pierce was promoting and was also nice enough to drive us there. I had never been to this venue before and there were 4 possible entrances. Ugh – what to do? We finally decided on the best entrance for the cars and waited. A lot more dealers had shown to this venue, but were scattered all over, as no one knew the protocol at this place. As luck would have it, we guessed correctly and the same limo carrying Pierce earlier pulled into the gated lot. He rolled down the window in order to tell us he couldn’t sign. The car went through and the gate closed behind. I suggested ONE person ask him if he would sign afterwards. We were close enough for Pierce to hear and see us, so why not try the polite route? So, one elected person did just that’; Pierce turned and put his hands together, gave a nod, and did a slight bow as if to say, I promise. Well, that’s a positive sign!

And so we waited… and waited… and waited. Some 8 and half hours after the initial talk show debacle, Pierce emerged from the after party. By now, there were at least 35 people waiting. Pierce, true to his word, JOGGED up the ramp to greet us. The gate opened and Pierce signed his life away. Not only did he sign, but he was so engaging with the crowd. Changing pens, suggesting pen colors that would look better, and even asking where someone had gotten the Bond book they were asking him to sign. 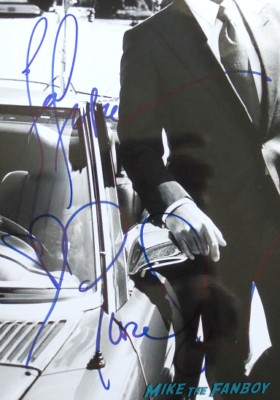 Who was this man?! Then it made sense. Pierce was definitely buzzed from the party. Don’t get me wrong – he wasn’t slobbering drunk by any means, but he was definitely feeling “happy”. When it was my turn, I told him I’ve had a crush on him since I was 12 and would he please sign my photo to Susan. His answer? “How could I not after hearing that?” Yay!! This was the charming Pierce I had seen on talk shows and on the big screen. 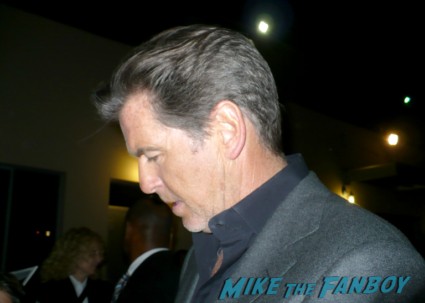 I was able to snap a few photos of him signing, but while I waited for my photo OP, (which his publicist said would be ok), he was suddenly whisked away before I could ask him. He was in the back of his car once again as I watched it drive away. I doubt I’ll ever get another opportunity for a photo, but my personalized autograph is pretty badass, so it’s all good. 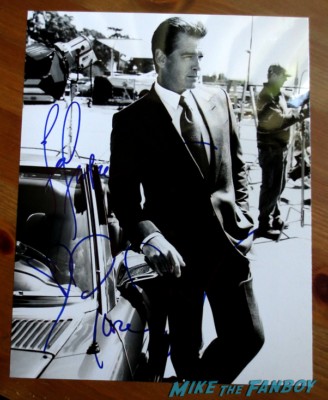 On this day, Pierce Brosnan, aka, Mr. James Bond was definitely Dr. Jekyll.

For being moderately awesome Pierce Brosnan is given the Happy Theo Award!