Oh, this hobby can be a frustration at times. Especially when an easy event turns ugly. Suddenly Susan headed out to meet Joel Edgerton and let me tell you, he’s one of the nicest guys around.

Sadly, Susan… That could be a new name… Sadly Susan! Sorry, I digress. Sadly, Susan had an incident with an overzealous publicist. My Lord people, just calm your shit down. I don’t know why publicists behave as if they are clearing the president. lol.

I recently had the chance to meet Joel Edgerton again. Once is never enough! Thanks to Mike sending me the tip and to Pinky for sending me the link to register. You guys rock!

Australians in film hosted a screening of Exodus with a Q & A afterwards with star Joel Edgerton. I got there so early, my friend and I were first in line. Since the theatre didn’t fill up entirely, we made a plan to head down front when the end credits rolled.

I have to say, I love Joel and I love Christian Bale. Both are amazing actors and both were super kind when I met them. The movie however was not my favorite. We’ll just leave it at that.

Afterwards, we shot down the third row on the aisle. I had 3 magazines with me (3 more at home) that had Joel on the cover. All rare finds I assure you!

Joel was running late and finally came bounding down the stairs to the front. “I’m here, I’m here. I got stuck at the loading dock”. I’m still not quite sure what that means. Joel was lots of fun to watch and listen too – he can get serious at times when he talks about the craft, but he is always charming. 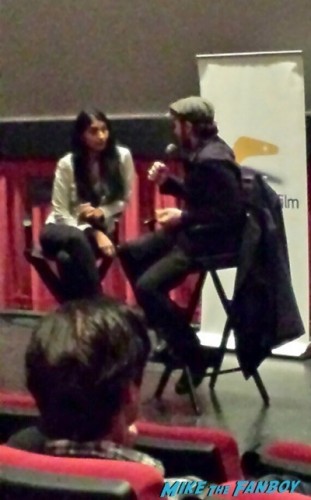 To my surprise and delight, there was no security – anywhere – so this should be easy. Once the Q/A had ended, I stood up and slowly made my way down to the front. Joel was taking a few promo pics in front of the AFI sign. A few other people had headed down, looking like they wanted a photo op.

There were maybe 8 people total waiting. I noticed a woman standing nearby holding a clipboard or some such “professional” items and she said to the other woman with her, “uh, this isn’t happening (motioning to us all), he has to go.” 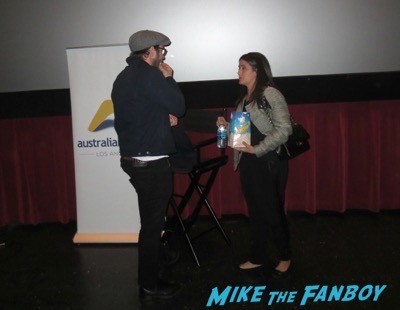 She made her way to Joe and grabbed him by the arm, telling him he had to go. He said, “Why what time is it?” I too wondered where he was desperately needed at 7:18pm on a Sunday. She said something and he said ok, and went back to munching some popcorn. Then a small group of (I assume actors) approached him for a group pic and he said no problem, took off his glasses and they got two photo ops.

Screw this noise, I thought, and went in for the kill. I asked if he wouldn’t mind signing a magazine I had. “Of course.” I asked him to personalize it and just like before, had to spell my name like three times. 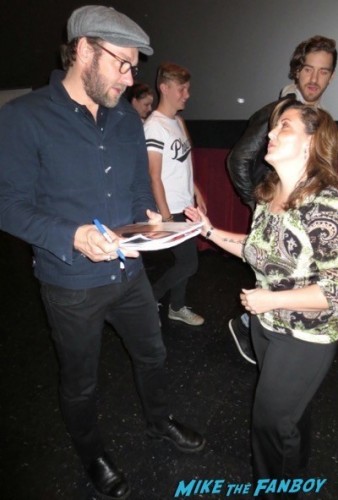 Come on Joel, Susan is an easy one! At least this time he got it right. Then I got a quick photo op and rather than get my other mags signed, I made sure my friend got a pic with him. 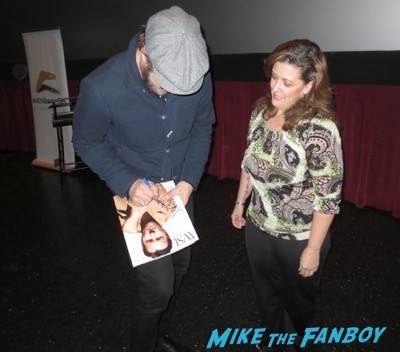 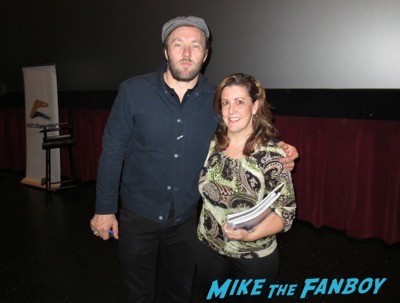 Then Attila the Publicist pulled him away. I went back to my seat to grab my purse, etc. and thought I might ask him as he went by if he would mind singing a second magazine. It was an Australian GQ for crying out loud – how many people in the U.S. have that?

Attila spotted me with it, blocked her whole arm over before I could ask Joel and said, “no, he’s not doing anymore and one is enough”. Then I realized he must have writer’s cramp/carpal tunnel after signing one whole autograph and it wasn’t nice to crowd him and make a fuss and try to talk to him when no one else gave a crap.

Joel is super nice and I’m sure would have had no problem signing a second magazine. I almost never ask for more than one thing, but Joel is a rare one to get around and in such a quiet setting too. It’s a shame his overzealous publicist or bodyguard or whatever she was had to be such an ass about it.

I’m still happy to have had a quick moment with him though – he’s one of my faves. 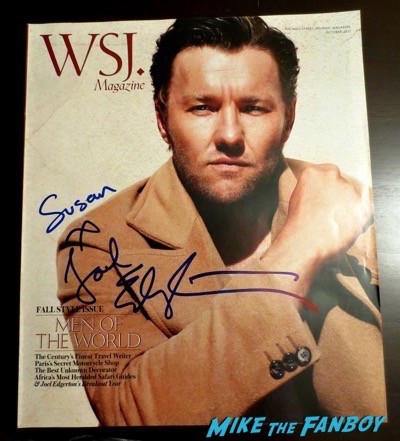