Ace was out and about on the cold hard streets of Los Angeles, and who did he want to meet… None other than Dan Connor himself! Mr. John Goodman!

I’m so happy that John Goodman is getting nicer, I remember a time when you couldn’t even get near this guy and now he’s so much more approachable.

What’s up autograph fanatics! Ace here with a recap of meeting John Goodman.

Regardless, I just had to try along with a couple buddies of mine. The worst thing he could do is ignore us… or scream at us… or point a gun at us and scream mark it zero…

We got there about an hour before the conversation started. I seriously believed that it would have been enough time to get him on the way in.

Regardless, we were there like 30 minutes late and we had to stick it through until the end.

There were seven fans in total waiting for an autograph. There were tons of Monster’s Inc. related items.  I personally wanted him on my Big Lebowski mini-poster the most…

I also had another mini-poster of Monster’s Inc, but realistically, I won’t see Billy Crystal any time soon.

After waiting about an hour or so, we see the crowd bobbling out…

At the same time, my brother says he sees Goodman crossing the corridor.  We immediately ask John if he can sign an autograph as he approaches us. 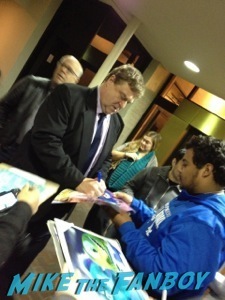 He doesn’t say one word but begins to sign… 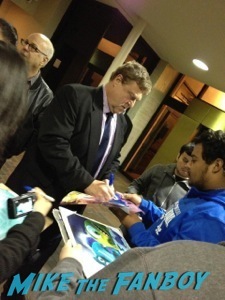 As Goodman signs, his manager/publicist is shouting one per person. Some people had not even got an autograph yet, but he kept shouting. 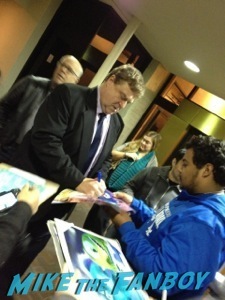 I eventually get him on my Lebowski poster… He took his time signing, making sure the placement was perfect.

While some got multiples, most gained only one after this experience. Of course, I tried to get my second one, but it’s always uneventful when you are pointed out and the others are still getting multiples signed… Regardless, I was happy.

Well, I hope you enjoyed this short recap guys…

Now remember, there is always a graphing opportunity out there… You just have to find it.