Home / Fanboying! • Will / Johnny Depp Madness! Will Braves The Crowds To Meet The Edward Scissorhands Star! Autographs! And More!

Who doesn’t love Johnny Depp. The man is awesome. Seriously. When out and about promoting his new film, Transcendence Johnny was making the talk show rounds. He’s always a pretty good guy, and by pretty good, I mean awesome. LOL.

Really, I have rarely heard of him not taking time for his fans, so I’m glad to see the trend continuing.

Will was there, hoping for a photo, however, it’s hard to get a picture with Johnny Depp, that’s for sure.

This is my first attempt at trying for Johnny Depp. When I heard he was doing a talk show appearance. I had to head out to meet him. Johnny is one of my favorite actors in all of Hollywood. If not, the best.

Got there around noon and surprisingly there was only a handful of people. From what i’ve heard last time, there was already a line forming. I think because there was a premiere going on and a couple events so it kind of weeded out some people.

Afternoon, around 1pm security comes over and tells us he is moving us to the regular side. Darn! I wanted to stay on the good side. As time goes by, more and more people started to show up every half hour. By the time, 6:00 pm hits, there was about 100 people! Where did they all come from? Six rows deep behind the barricade and at least three rows behind the fence. People in the barricade were mostly fans, paps, tourists, and looky loos. Most of the dealers posted up at the fence.

As we all waited, we hear a endless loop of the Globetrotters theme song playing out on the street. It’s droning over us and making our brains go numb. When that one second when the music stops, it feels so satisfying for one brief moment to put our minds at peace LOL.

Johnny’s well known bodyguard comes over and checks out the scene before deciding to bring Johnny or not. He tells security to cut off the walkway and not let any more people come in. 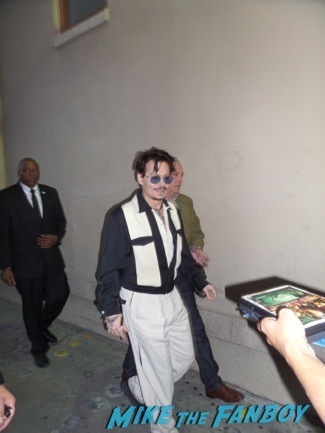 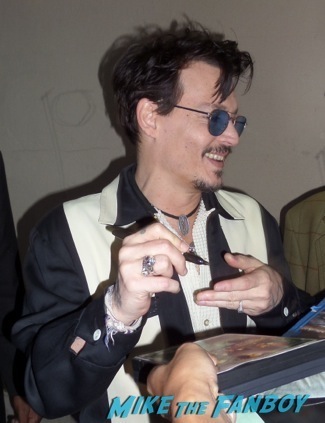  
He signs my Public Enemies blu ray dvd as he makes his way around the barricade. 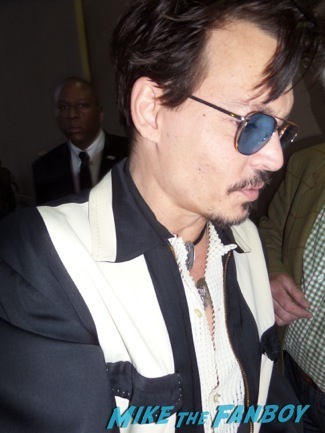 When I was going for my photo op, Jerry the bodyguard knocks my camera away from my hand! It was getting nuts. 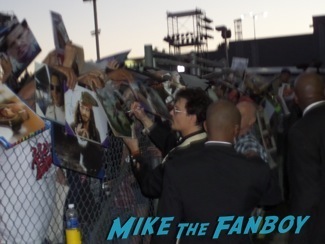  
When Johnny gets to the fence. it even got more crazier. Dealers pushing and shoving and almost a fight broke out! They were racking it up in multiples and Johnny was signing anything that’s in front of him. I heard dealers got anywhere from 7 to 10 things signed! It was a field day for dealers.

Fellow MTF guest writer Paul was mixed up in that mess and he was pissed after the commotion. I don’t blame him.. one dealer was bragging that he got ten things signed and that he doesn’t have to come back to work at the premiere LOL. SMH..

It is true that Johnny Depp is super fan friendly! But it’s too bad that Johnny doesn’t make decisions on his own and he let his bodyguard take full control of him. I was kind of bummed that I didn’t get my photo op with Johnny. I’m not an autograph guy, but It’s good that I brought something for him to sign or else I would’ve been shut out. But i’m ok with just getting my blu ray dvd signed and being that close to him. I guess beggars can’t be choosers… 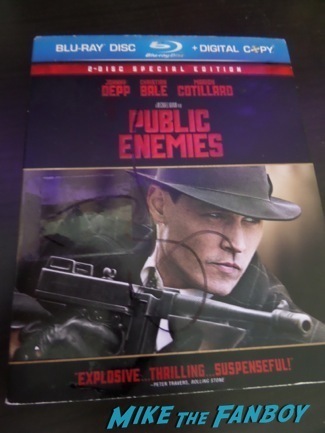 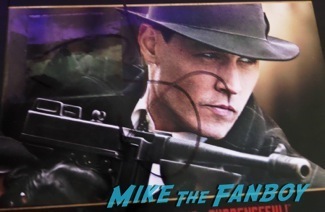