Nazis be damned! Taika Waititi’s whacky, wild “Jojo Rabbit” is the funniest film of 2019. This satire sizzles on the screen and will keep you laughing nonstop.

During World War II, Johannes “Jojo” Betzler (Roman Griffin Davis) joins the Hitler Youth as a 10-year-old boy with his best friend Yorki (Archie Yates). Although Germany is in the final stages of the war effort, Jojo’s enthusiasm and “enlightenment” continually keeps getting encouraged by his imaginary friend Adolf Hitler (Taika Waititi) whereas his mother Rosie (Scarlett Johansson) reminds him “not everything is as it seems.” 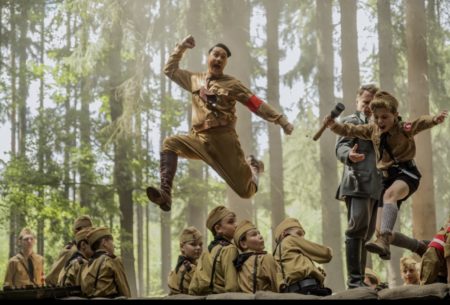 While away at Nazi youth camp, Jojo earns the nickname “rabbit” for refusing to kill a defenseless animal. With the encouragement of his imaginary friend Hitler and to overcome his embarrassment, Jojo grabs a grenade from Captain Klenzendorf (Sam Rockwell) during a demonstration and accidentally blows himself up. Soon Jojo is sent home to recover from his injuries when he starts hearing noises coming from upstairs and discovers a Jewish girl, Elsa Korr (Thomasin McKenzie), hiding in the walls. With only the help of his imaginary friend, Jojo must confront his ideology and address the most important question of his life, what would a good German do?

Much in the vein of Charlie Chaplin (“The Great Dictator”) and Mel Brooks (“To Be or Not To Be”), Taika Waititi wisely and beautifully balances the humor and atrocities of World War II to create an instant comedy classic. Although the film will certainly create divisive waves with its irreverent, ingenious humor, “Jojo Rabbit” remains a remarkable and amazing achievement. The silly satire certainly creates controversary, but what good comedy doesn’t?

Taika Waititi wonderfully follows up “Hunt for the Wilderpeople” and “Thor: Ragnarok,” proving his quirkiness and cleverness continues getting better with each subsequent film. Taika’s distinct directing abilities is a match made in heaven for creative comedies like this and demonstrates his abilities with making electric, entertaining movies when he’s allowed to flex his comedic muscles. Trying to balance comedy and drama definitely doesn’t always pan out, but Taika wrestles wonderfully with the sorrowful subject magnificently proving once again there is comedy in everything, even Nazis. 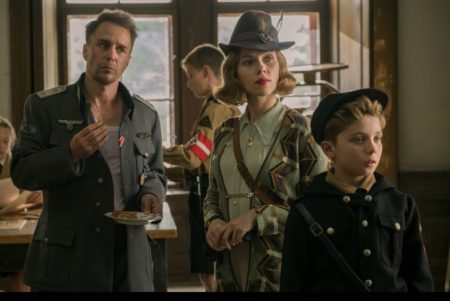 Robert Benigni won two Academy Awards for Best Actor and Best Foreign Film with his Italian dramedy, “Life is Beautiful,” showing how humor can help save lives even in a Nazi concentration camp. When human ingenuity is used instead of proudly proclaiming propaganda and politics, even the most delicate subject matter will persist as perfect comedic fodder. By sidestepping the obvious, even the most heinous and horrible atrocities can create humor. “The Great Dictator” definitively remains the best political satire comedy of all time, Mel Brooks has made fun of Nazis countless times (“The Producers,” “To Be or Not To Be,” and “History of the World, Part 1”), and “Hogan’s Heroes” showcased the hilarity of Nazi buffoonery proving World War II antics can be funny. Now “Jojo Rabbit” joins that elite group. So don’t be surprised when “Jojo Rabbit” becomes one of the leading contenders during award season, especially for Best Screenplay and acting. 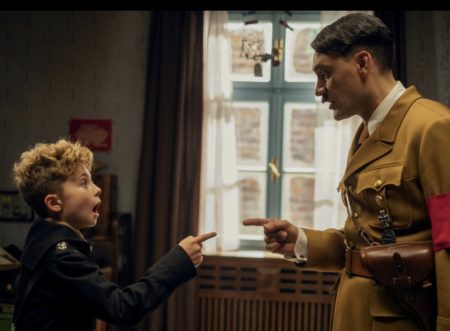 Roman Griffin Davis is a revelation as the titular character and his chemistry with Thomasin McKenzie mesmerizes you with what should be a difficult relationship. Throw in the fact Adolf Hitler is hilariously played as an imaginary character along with scene-stealing performances by Scarlett Johansson, Sam Rockwell, Rebel Wilson, Alfie Allen and Stephen Merchant, “Jojo Rabbit” will leave you laughing nonstop with all of their memorable moments. Almost the entire time I couldn’t stop laughing and lost my breath several times trying to rest my ribs from trying to contain my laughter. Waititi’s humorous heart trumps the hate spewed by Nazis and actually educates viewers how quickly society gets wrapped up in the horrors of society. What could’ve been a disaster, Waititi infuses a plethora of creative juices to make following this rabbit down the hole worthwhile.

Considering the infamy of Jerry Lewis’ unreleased “The Day the Clown Died,” it’s understandable why many people have and will condemn this movie before even seeing the film. Unlike Lewis’ “lackluster” and “embarrassing bad attempt” (per reports), “Jojo Rabbit” contains plenty of tender, thought-provoking moments while wearing down and mocking the myth of the Nazis. Sam Rockwell’s ridiculousness or even Stephen Merchant’s menacing stature (6’7”) as an SS officer illustrates the goofiness and outlandishness of the entire Nazi party. Looking in hindsight it’s overtly obvious, but the attitude, appearance and unwavering support should scare every viewer when we ignore common sense when its staring us in the eyes. Don’t get caught up in the negativity of nationalism as wicked decrees destroy our society and allow sinister people to lead you. 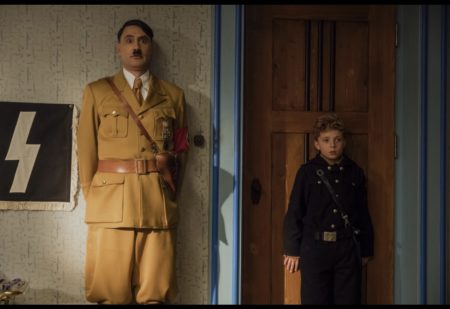 “Jojo Rabbit” is the best comedy of the year with the year’s most original script. This exciting and electric cast certainly captivates your heart with so much joy it’s a mistake to ignore this movie. This coming-of-age World War II comedy will make an invigorating impression on you and should be an essential viewing experience. For those questioning the subject matter and the idea of why we should laugh at Hitler I leave you with this Mel Brooks quote. During an interview to promote the stage adaptation of his Academy Award winning film “The Producers,” Mel Brooks famously commented about Nazis and Hitler by saying “By using the medium of comedy, we can try to rob Hitler of his posthumous power and myths.” Be a smarty and enjoy the mockery of the Nazi party!