Home / MTF Rant / MTF Rant! Wait… Wait… Jonah Hill Is Handing Out Cards To Fans Instead Of Taking A Photo Or Signing Something?!? Say Wha?

You know… I haven’t hated Jonah Hill nearly as much as I’ve despised the marrow of his existence before. It’s been a long time since I’ve said, “Academy Award nominee Jonah Hill is my nemesis.” In fact, we were doing okay for the most part. And then…

Then… Jonah Hill goes ahead and does this…

Apparently now, if you approach the “star” of such classic masterpieces like The Sitter, Strange Wilderness, and yes, the man who got fucked in the ass by Satan in This is the End, he will not take a photo wit you, he will not sign, he will only present you a card… One that looks like this… 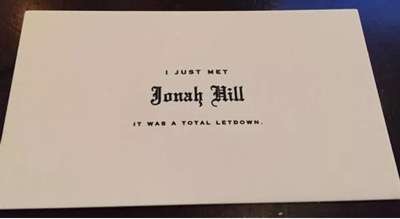 It says, “I just met Jonah Hill, it was a total letdown.”

This practice was done before, by the super fan friendly Steve Martin. He used to hand out cards that said “this card certifies that you met Steve Martin.” Guess what, he stopped doing it, because people thought… Oh, that’s kind of dicky.

And yet, Oscar Nominee Jonah Hill thought, “Hey, let’s take up that practice!” 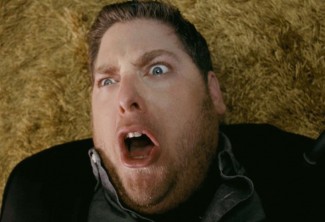 It doesn’t take that long to just be a decent human being, I just can’t imagine handing out a card like that.

Plus, does Jonah Hill really get swarmed by screaming fans? He’s not Angelina Jolie for God sakes, and she’s still really nice.

Let me tell you Jonah Hill, you are no Angelina Jolie!

I’m shaking my head… And climbing down from my soapbox.

Do you guys think that this is okay? Handing out a card to “fans?”