Paul is back and has a nice recap after a few days of fanboying! He had a near miss with Dark Shadows (and yes, I loved the Tim Burton version!) star Eva Green, scored with Ted Danson, got a selfie with Jordana Brewster and finally met Iron Man 2 star Mickey Rourke!

Can’t beat that with a stick!

Ok… last Tuesday I grabbed my ultra rare awesome “return to collinwood” book written by the lovely original josette deprie/Maggie Evans, Kathryn Leigh Scott signed by most of the original cast. Anyways, I figured as much as I hate the atrocity Tim burton made, this would keep me busy. Plus, the gorgeous Eva Green was the guest that day and Chloe Moretz was on the next day (I ended up skipping that one ). Anyways, got there only to find fryboy mike camped out since 10 a.m. So I b.s. with him and another pal who brought his tween daughter. The regulars start showing up including Mike & Ace of fanboy fame wowza!

So first up was ted “how long can you hold your breath” danson who was awesome and signed for everyone who had stuff for him (I had a getting even with dad press photo) and was pretty cool until some knucklehead starting chanting “cheers,cheers,cheers” at him. 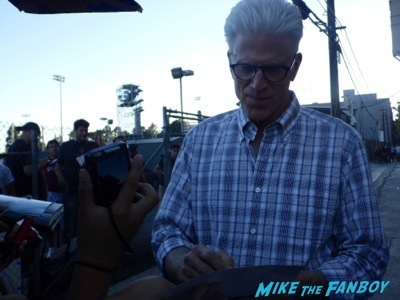 Then Eva came and started signing normally she is pretty good at signing and has a decent signature but that day was a massive fail thanks to these genius Dealers (right now I’m listening to Devo while writing this and thinking about the behavior of these clowns proof that devolution is real!). So she started signing and the shoving and shouting and the rabid ape like behavior was in full force. 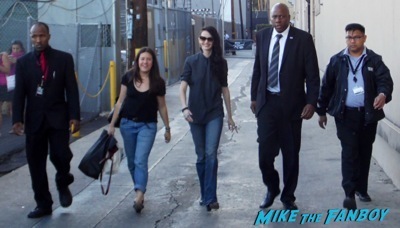 She signed a photo I was holding for a friend (sin city 2 cast shot) with the letter S (the graph was so bad he gave me the photo) and thankfully didn’t ruin my book with her S. Then she started to go to the fence and these dummies pretty much scared her off in which she was whisked off by security. Afterwards we collected our losses and called it a day.

Alright Thursday, and despite rumors that he pretaped, I was looking forward to Mickey “hank” rourke and not really caring about Jordana Brewster (especially after she didn’t sign for me at the vin diesel star ceremony).

I arrive super early expecting a crowd for Mickey but found 10 spots being held for Jordana?!?! Ok… after chatting with some of the regulars about how amazing the wrestler is and how Barfly and Rumblefish are so iconic, we got pretty annoyed with some of the younger graphers who decided to wrestle/play fight each other behind the barricade (seriously grow up!!!!).

So Mickey showed up and I magically turned into Scotty and became super loud in my chant and in true Mickey fashion he flipped us the bird (if you didn’t get it you had no business being there) somehow that offended the kid next to me who tried to school me on blue painters tape.

So flash forward the security walked over and spoke very firmly that there will not be pushing and shoving and “racking.”

Or they will not bring guests over anymore 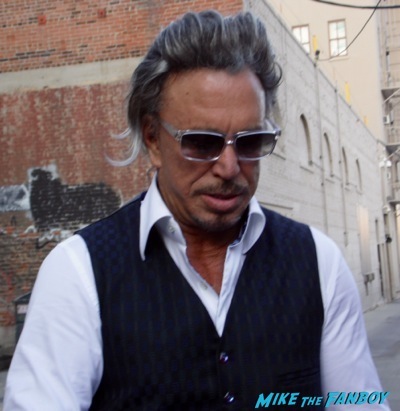 When he came up to me he saw that I had an original press photo for barfly he said “nice” and took his time signing and then I asked for a photo. Unfortunately, he wasn’t feeling that great and declined (he turned down everyone expect one girl for a photo) next was Jordana who was a lot nicer than last time and she signed the photo I had for a friend but I managed to get a decent photo with her. 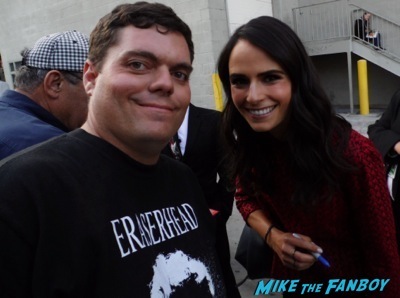 It was time to call it an evening