Home / JM • Reviews / Judy Movie Review! JM Says, “Renée Zellweger dazzles in one of the most memorable performances of the year!”

Fame is fleeting, but certain celebrities can always entertain you. Renée Zellweger dazzles as the titular “Judy” in one of the most memorable performances of the year.

The fragile former childstar Judy Garland catapulted to fame during Hollywood’s heyday and became a showbiz legend with the “Wizard of Oz.” However, the downward darkside of fame fueled her drug habits making her unworthy and unreliable to be viewed as a has-been celebrity in 1968. Trying to create a more suitable home for her children, Judy Garland accepts an offer to perform a five-week sold-out run of shows at The Talk of Town in London. After constantly performing nonstop for 30 years, Judy’s joyful voice has withered and weakened to a shell of its former self. Still, she perseveres with wit and an engaging, entertaining mentality. Judy frequently wrestles with her demons doubting herself and hindering her performances. Despite this, the show must go on, right? 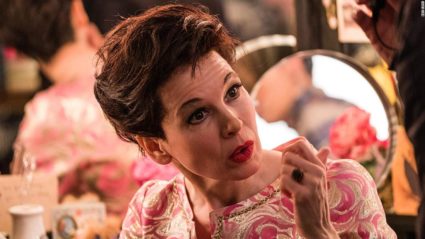 Based on the play “End of The Rainbow” by Peter Quilter, “Judy” chronicles Judy Garland’s last public performances and tour in London. At the time, Garland had an increasing insurmountable debt and recently divorced from her fourth husband Sidney Luft. Judy Garland’s gargantuan voice wowed audiences and became a cultural staple with her renditions of “Somewhere Over The Rainbow,” “The Trolley Song,” and “Have Yourself a Merry Little Christmas.” However, Hollywood soon dismissed her talents despite drugging her up for decades and created an unhealthy lifestyle she could never shake off. Forced with no other options, Judy Garland accepted an offer to perform at Bernard Delfont’s dinner and cabaret club, The Talk of The Town, as a last resort.

Renée Zellweger’s zappy, sensational performance persists as one of the year’s must see and essential viewing experiences. Unlike Judy Garland, Zellweger’s voice did not need to be perfect, but at least she didn’t lip sync like Jamie Foxx (“Ray”), Rami Malek (“Bohemian Rhapsody”) and Marion Cotillard (“La Vie en Rose”). The beautiful broken voice showcases the tragedy of Garland’s life and celebrates her genius as an inspirational individual who weathered through with a sensational spirit soldiering on as a performer. Throughout the film, Zellweger demonstrates the harsh habits of intoxication, insomnia and self-medicating Garland became accustomed to thanks to Louis B. Meyer. Although the throwbacks to the 1930s illustrate the despicable, demeaning treatment she received, Garland doesn’t blame the Hollywood system for any of it. 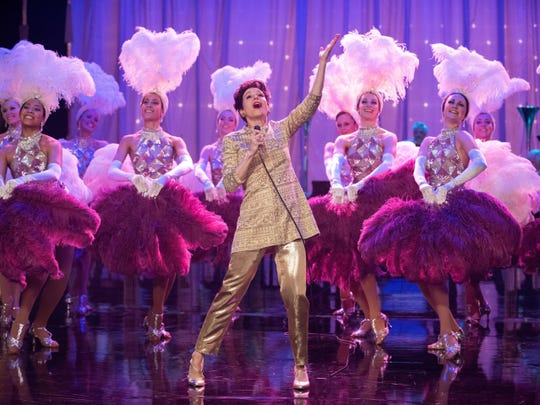 Zellweger explores beyond the surface and how Garland’s work style cost her a truly happy life. At this particular point in time, Garland should have been resting her voice, but physically providing for her children was the most important thing. Sadly, she devastatingly damaged her most valuable asset, her voice, and frequently ignored doctor’s orders almost always providing personal connections with each rendition of her songs in order to compensate for diminished performances. Zellweger captures the nuances of the titular character creating a compelling, captivating and comedic performance. The intense insecurities and self-doubt are certainly channeled with an authentic and amazing role outside your typical bio using realism instead of pure glamor.

Most biopics steamroll through a cavalcade of memorable moments over the course of someone’s life, but the tender, thoughtful Talk of the Town shows illustrate the frustrations of fame. The chronological clichés are ignored, but definitely doesn’t deter from the other bewildering biopic tropes with the most glaring being an average script anchored by a great performance. Without an exceptionally entertaining performance by Renée Zellweger, “Judy” just doesn’t quite hit the notes. Her performance is why you need to see the film! 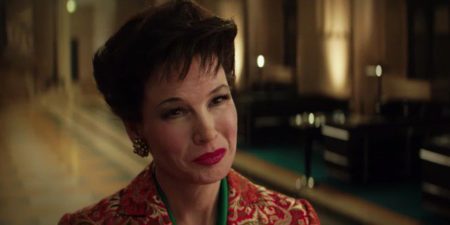 Upon Judy’s arrival to the theater, we’re introduced to two adoring lifelong Garland fans named Dan (Andy Nyman) and Stan (Daniel Cerqueira), who bequeath flowers to her on arrival and later learn they attend almost every sold-out show. The fleeting film moment seems simply inconsequential as a minimal fan interaction, but the dynamic duo steals the show with a wonderful interaction later in the film waiting by the stage door to meet their idol. Judy Garland graciously decides to spend the evening with her fans, which is the ultimate fan experience. However, they disappear after that sequence and don’t appear until the very end, which was extremely frustrating, albeit they do contribute to the cute, cheesy finale.

The same can be said with Rufus Sewell, Michael Gambon and Jessie Buckley being mismanaged. These three fantastic actors are amazing, but extremely underutilized, especially Buckley. Considering the perception of her relationship as an assistant, Buckley’s character is nothing more than a glorified background actor with a few lines here and there. Still, the sizzling performance by Renee Zellweger makes it worthwhile to check out. “Judy” definitely falls in line with “The Coal Miner’s Daughter,” “Walk The Line” and “Crazy Heart” as a boring biopic anchored by a spellbinding, singing lead performance. It hits the right notes when needed, but there are too many missed cues to go completely unnoticed. However, like any live performance, her charisma captivates beyond a doubt dismissing any errors to provide a solid evening of entertainment.

Renée Zellweger’s creative casting persists as one of the most amazing and awesome casting decisions in the past decade. Her terrific performance casts a spell on you with a heartbreaking, brilliant impression. Judy Garland fans should seem happy with the end result as would casual viewers, but by no means does this movie serenade you beyond an award worthy performance by Zellweger. It’s definitely a decent bio, but overshadowed by an unbelievable performance causing confusion whether or not the filmmakers wanted to develop anything beyond the titular character. You might not want to grab the expensive VIP tickets, but anything in the orchestra or mezzanine seats will be worth attending to witness Renée Zellweger as “Judy.”