Jurassic World: Fallen Kingdom is out now on Blu-ray, and it’s like two different films mashed into one, the first half of the film being more interesting than the second. Isla Nublar is on the brink of being destroyed. The island from the last film has been left for dinosaurs to roam free in the ruins of the last Jurassic Park theme park, but an active volcano is about to erupt. There’s a political discussion over whether the dinosaurs should be saved or allowed to be destroyed by nature. Dr. Ian Malcolm (Jeff Goldblum) makes the case that nature has set these creatures for extinction for the second time.

Enter Claire (Bryce Dallas Howard) who has put up her high heeled running shoes but is running an organization to save the cold blooded beasts. Claire is introduced to a plan to go to the island and transplant the dinosaurs to another island and without giving it a second thought, she’s onboard. However, to recruit Blue, the hyper intelligent Velociraptor, Claire needs Owen (Chris Pratt) to get back into the fold.

After he’s recruited they head to the island with two co-workers Zia (Daniella Pineda) and Franklin (Justice Smith) for their “knowledge” of dinosaurs. There, Owen finds Blue, Claire ends up trying to battle the elements after both of them get blindsided by the treacherous people they teamed up with.

This half of the movie, even with the cloying Franklin coming along for the ride with no real reason but to whine, is really interesting and sad. We see some of the gentle dinosaurs dying and not being able to be saved. It’s a tough pill to swallow after five films to actually see the “good” dinosaurs perish and I found myself tearing up. 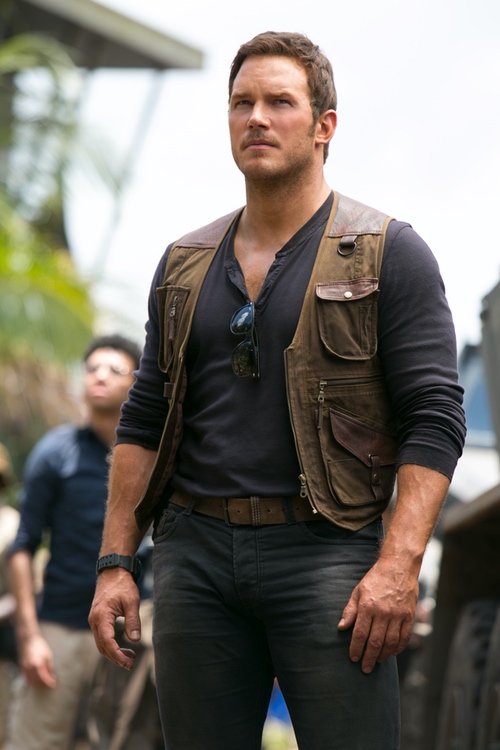 Now, here’s where the film switches and we’re placed into a large secluded house where there’s a secret dinosaur bidding basement with all kinds of bad guys paying large sums of cash to acquire the stolen dinos. This is where, to me, the film has jumped the shark, I can suspend disbelief more than the average human, but this just feels like lazy writing. The film would have been fine if the first half of the film had been expanded. This second half is quite literally ludicrous and borders on parody. It’s so unfortunate because it could have been a fun film and instead went to just over the top randomness. 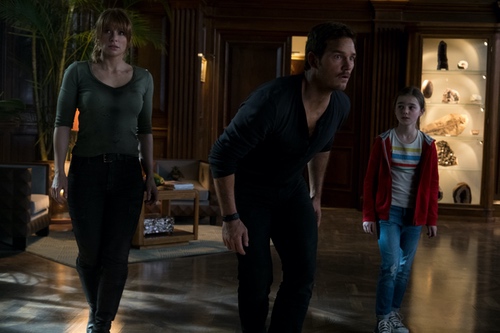 In the lead roles, Chris Pratt is fine, he’s not as compelling as he was in the first film and is half phoning it in. Bryce Dallas Howard is playing the most underwritten female character in film over the last five years. I don’t understand why they can’t make Claire a little more interesting with at least a touch of depth. That brings me to Franklin, who is the worst new character in the entire franchise. He’s scared of everything but wants to work with dinosaurs? Let’s go back to the original Jurassic Park, where every character was well written and had two of the most believable child actors on film and now… we’re given this? It’s kind of a shame. 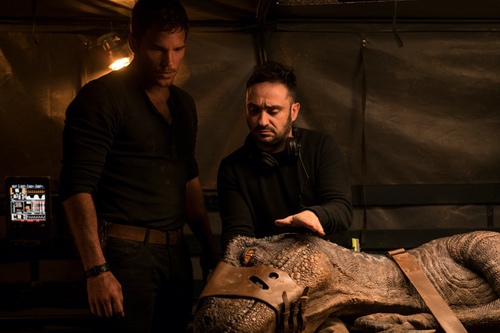 Jurassic World: Fallen Kingdom arrives on Blu-ray in a fine transfer thanks to Universal Home Entertainment. The colors are bright and sparkle in the first half of the film especially. The second half of the film is shot in almost darkness but there’s still depth of picture and looks great. There is little to no fallout and the fine details are really awesome. I loved seeing the destroyed theme park and the different terrains of the island. It really was very cool to see.

On Set with Chris & Bryce
The Kingdom Evolves
Return to Hawaii (1080p, 2:41): A quick look at shooting in Hawaii.
Island Action
Aboard the Arcadia
Birth of the Indoraptor
Start the Bidding!
Death by Dino
Monster in a Mansion
Rooftop Showdown
Malcolm’s Return
VFX Evolved
Fallen Kingdom: The Conversation
A Song for the Kingdom
Chris Pratt’s Jurassic Journals
Jurassic Then and Now – Presented by Barbasol 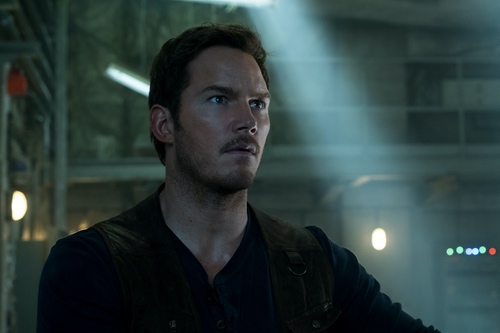 Overall, while Jurassic World:Fallen Kingdom has major flaws and is arguably on the lower end of the film series scale, it’s still fun. I don’t think I’ll ever tire of seeing dinosaurs roam an island and watch people fleeing for their lives. I just wish there was more attention paid to the script. I think it would have been a better film. I still say check it out because it’s worth a viewing, just do so with a heightened sense of disbelief.

Jurassic World: Fallen Kingdom is out not on Blu-ray!