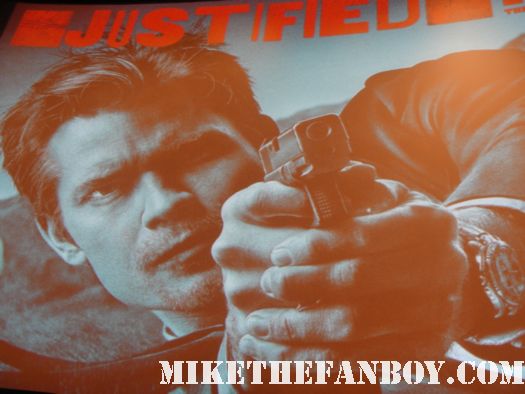 Have I mentioned I book myself out to the point that I fully expect my brain to pop? It’s true… Snap, Crackle, Pop…I’m running in my car to try and make this super special event for the FX series Justified With an exclusive Q&A with Timothy Olyphant, Margo Martindale, Walton Goggins, Natalie Zea, Erica Tazel and Graham Yost. I invited fellow celebrity enthusiast… That’s a bit of work jargon I’ve picked up… lol… everyone is an enthusiast… the saucy Lindsay from www.iamnotastalker.com to join me and she jumped at the chance. So, off we go!

6:31 p.m. – Lindsay and I have been texting each other and I’m tossing a bowl of pasta in my mouth while trying to get to this event. Sigh… I was in Santa Monica for a meeting at work, and then had to get to North Hollywood and also throw some food in my mouth before I passed out… whew… What a day!

6:37 p.m. – I just got a text from Lindsay when my brand new Sprint Google Nexus phone died. I’m talking DIED! It froze on the opening screen and wouldn’t do anything. Great… I literally got it two weeks ago with my sister… sigh… Pissed off man…

6:42 p.m. – I got in, and found Lindsay in the front row holding a spot… Whew… Yep, it looks like the phone is dead. I mean it’s the brand new Sprint Google Nexus phone and it supposed to be all fancy but no… it’s crap.

6:55 p.m. – Oh, there are a couple other friends, It’s The Novel Strumpet! And our other friend Helen! Helen and I are lesbian girlfriends; because we love Lilith Fair esque music… that fits right in with Justified doesn’t it. Lol… Sigh…

7:28 p.m. – Damn, it’s a full house. I’m so glad to see so many people here for Justified because I just started getting into it once I got season 1 on blu ray, and I really want it to succeed…

8:19 p.m. – Okay, that was amazing… I loved that episode… I didn’t love being in the front row. Lol… My neck… ugh… lol… The cast is coming out… The Q and A has Timothy Olyphant, Margo Martindale, Walton Goggins, Natalie Zea, Erica Tazel and Graham Yost.

8:22 p.m. – Graham Yost is doing a lot of the talking, and is discussing the how they started the show based on Elmore Leonard’s novels Pronto and Riding the Rap and his short story “Fire in the Hole”. 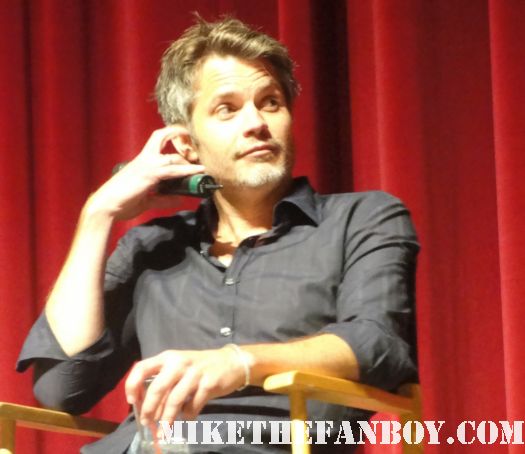 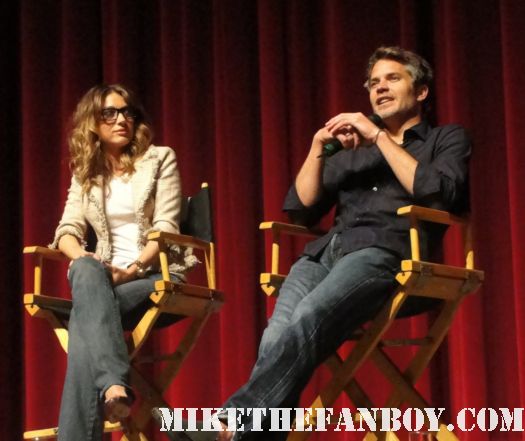 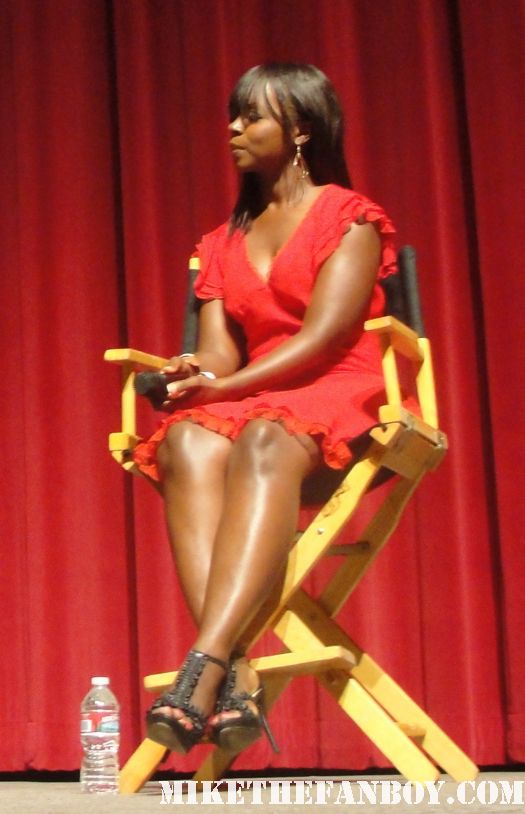 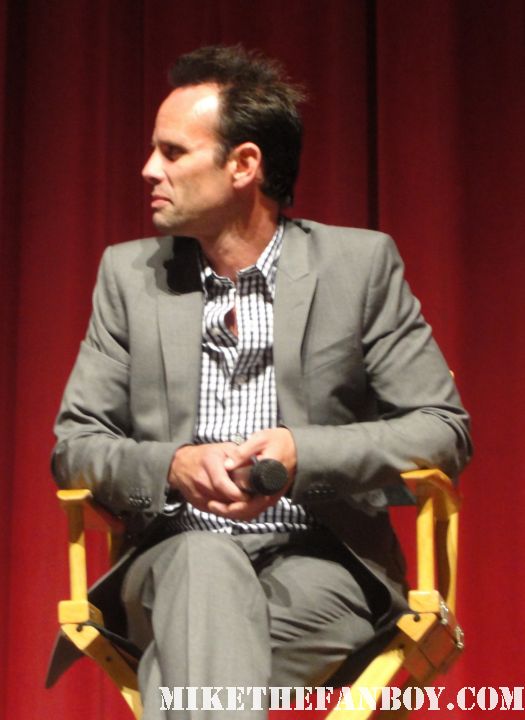 8:44 p.m. – Some guy is asking a question and I think he’s trying to be in character trying to get a part on the show… 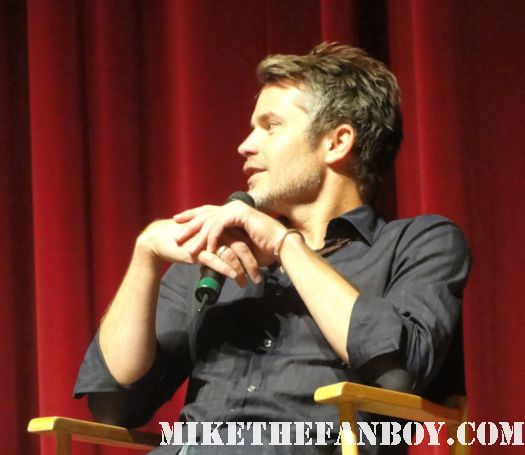 Graham Yost said… “I’m scared.” lol… Me too buddy, me too… (I wish I had taken more notes during the q and a sorry, I was trying to get video and photos, so I hope those help guys!). 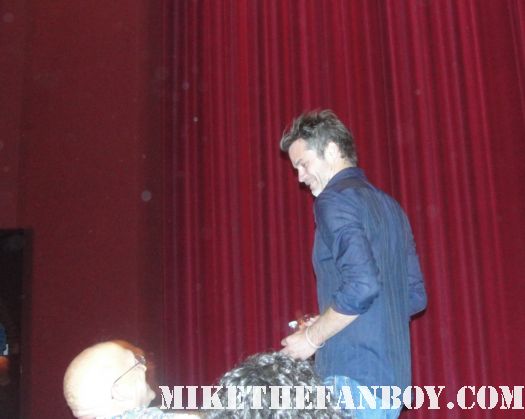 Lindsay asks Timothy Olyphant if she can get a photo, and Timothy Olyphant is like.. “I’m not doing photos.” Okaaayyy….. lol… That was a little… uh… offputting… He is signing for everyone though, and I got him to sign my DVD which was cool… Erica Tazel and Natalie Zea took off , bummer.

8:49 p.m. – Walton Goggins is the nicest guy ever. he’s literally chatting with people and just hanging out. 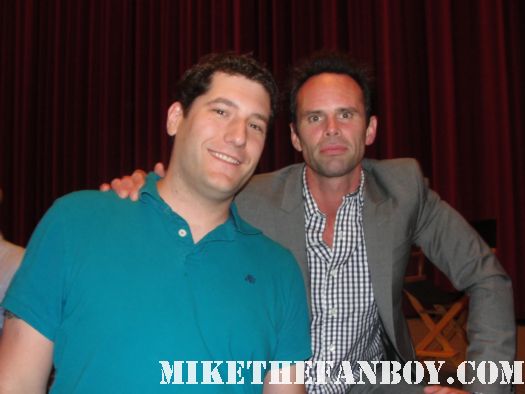 He signs my DVD and then takes photos with both Lindsay and myself. I mean like, super nice.

8:53 p.m. – Both Lindsay and I wanted to meet Margo Martindale because she is totally awesome but because she was in Dexter and now Justified! 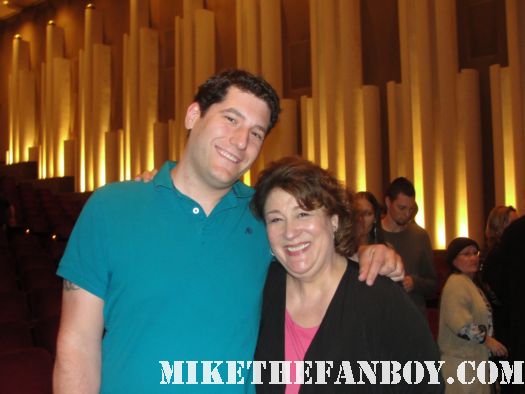 She is the coolest person ever! I told her, “You died on my two favorite shows, Dexter and Justified!” lol.. She said, and they were both death by pie! (Margo died via key lime pie on Dexter and she dies on the series two finale of Justified… She is adorable!

9:02 p.m. – Lindsay and I headed out to the reception and saw Erica Tazel and asked her for a photo. She is very soft spoken but adorably nice. 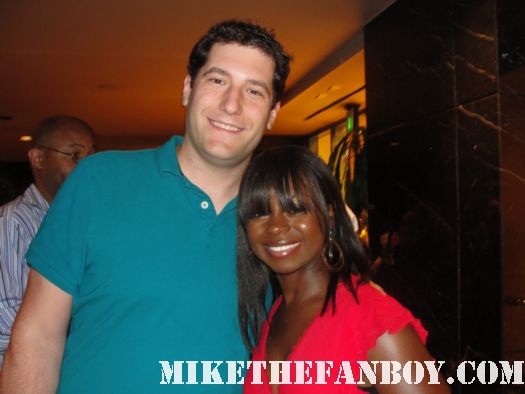 We both got photos and she signed my DVD so I was a happy man.

Such a fun simple night and my brain did not go Snap, Crackle, Pop… My phone did! Lol, I guess that’s better than my brain! Whoo hoo! 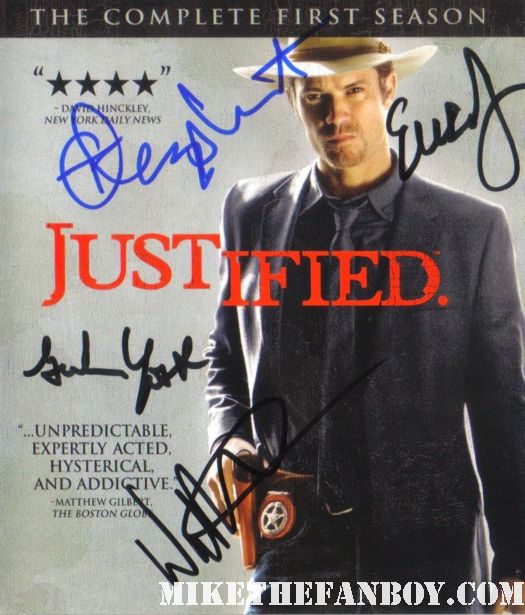