I was so happy that this all worked out! Karalee is awesome, we all know that however she collects autographs here and there mainly for family and friends. Well, one person she loves is Ms. Debbie Reynolds.

I love hearing stories of people getting to meet people they have grown up with and have a distinct connection to and her story is so adorable! Seriously!

Check out her report about meeting Ms. Debbie Reynolds at this years Festival of Books!

Hola friends! Or, in honor of this recap, perhaps I should say, “Good mornin’, good mooorrrrnin’!” That’s because I’m about to share with you one of the greatest little treats of my life: meeting the one and only, unsinkable Debbie Reynolds. 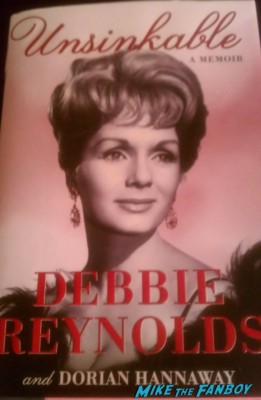 Full disclosure: I grew up watching musicals. When all the other girls in my school were taking ballet, I took tap so I could be like Ginger Rogers. In 5th grade, we had to choose someone’s biography, do a report, and come dressed as that person. Little Asian me in my rural, one-stoplight town came to Mrs. Swan’s class in a tuxedo, complete with a top hat and cane. I was Fred Astaire. The resemblance was uncanny. In 4th grade, I was interviewed for our school newspaper, answering hard-hitting questions like “What’s your favorite color and pet’s name?” When asked about my favorite movie, I was too embarrassed to say my real answer (see: “White Christmas”) so I replied with what I knew was the popular movie at the time, “Dirty Dancing.” Though I’d never seen it; my parents were a tad strict then and I wasn’t allowed to watch certain movies. That’s a very long way of saying “Singin’ in the Rain” is one of my all-time favorite movies. So when I found out living legend Debbie Reynolds was going to be at the annual LA Times Festival of Books, I knew I had to meet her. My mission: Meet Ms. Reynolds and get an autographed copy of her new book, “Unsinkable,” for my Mom for Mother’s Day.
My roll dog this day was Mr. Fanboy himself. It was our first outing together, just the two of us, and I had so much fun with him. We got to chat, have some laughs and share some secrets, given alllllll the extra car-ride time we were blessed with (thanks LA traffic for being uber-ridiculous on a Saturday morning…and special shout-out to the festival peeps for zero parking signage once we actually arrived on the sprawling USC campus).

Anywho, let me move this along. We meet up with Ace, who is a book festival pro. We follow his lead and set up home base camp at the area where authors/presenters/etc. have to check in and check out. Debbie is not scheduled to arrive till later in the afternoon, so we focus our attention on getting Mike his much-coveted autographs, including “Weeds” creator Jengi Kohan, and “Adventures in Babysitting,” “Goonies” and “Home Alone” director Chris Columbus. Big success with both! There was also a certain 80’s movie star we were hoping to snag for Mike, but well…you’ll have to check out how that one played out.

It’s now about time we figure Ms. Reynolds should be arriving to check in. She’s slated to do a reading from her book and then sign copies for fans. Oh, wait, holy fruit…there she is! Lovely in white from head to toe. She’s with two handlers and her dog, also white (adorable). 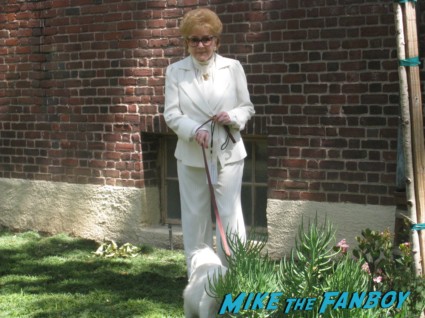 After she checks in, she’s walking toward us – again we’re just hanging out at our make-shift home base – with her dog on a leash. She steps off the pavement and onto the grass to let her dog roam off the leash for a few minutes. As she’s standing there, I say “Ms. Reynolds, your dog is precious. What’s your dog’s name?” She smiles and says, “Thank you. His name is Dwight.” 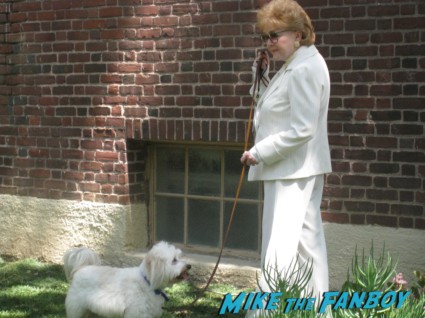 Um yeah, I will forever file that away under “Conversations with Debbie Reynolds.” Before she walks off, Ace is able to get a fantastic autograph from her. But that’s just the appetizer, friends. The book signing for my Mom is still the main entrée on the menu! And of course, for dessert, I want a picture with Debbie!

I decide to forego the book reading and just hop right in line for the signing. I know it’s going to be a big crowd and I don’t want to wait hundreds of people deep. (And from what we heard later, that’s exactly what it was. We heard she signed and signed…and then signed some more. So many people love Debbie! How can you not?!)

Mike heads off to check out some other festival areas and perhaps rehydrate after our impromptu marathon. Yeahhhh, you’re going to want to check that out too. I’m about No. 30 in line and just happy to be sitting down and in the shade. A while later, Mike returns, followed by Ace and his brother. Not long after, there’s a bit of commotion at the front of the line. Debbie has arrived. Let the giddiness begin! 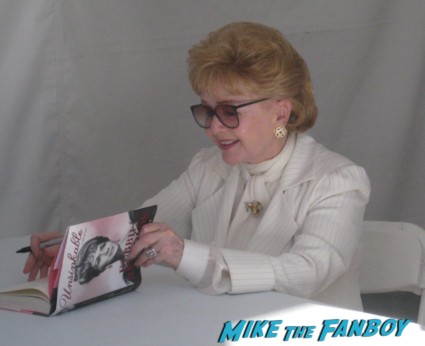 Now, earlier, one of the festival volunteers had come through the line and handed out Post-It notes so we could write down the name we wanted Debbie to personalize the book for. My book proudly boasts a sticky note with “Martha” across the top (love my mama!). But as we get closer to the front of the line, we find out Debbie is not going to personalize. Oh, bummer. But that’s OK, I’m still excited for the autograph. As I start to peel the Post-It out of the book, Ace tells me to keep it there. “You never know,” he says. “She may still do it. Just leave it. It can’t hurt to try.” Again, Ace is a festival pro. The Post-It stays. 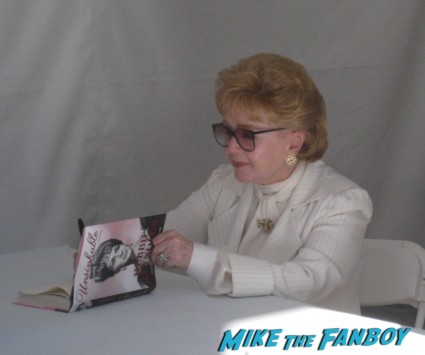 It’s now my turn to meet (or shall I say re-meet) Debbie. I notice Dwight is chilling under the table next to her feet. Precious. I place the book in front of her and tell her it’s such a treat to meet her and how I love her movies and wanted to tap dance like her…I may have rambled, but I was so excited! 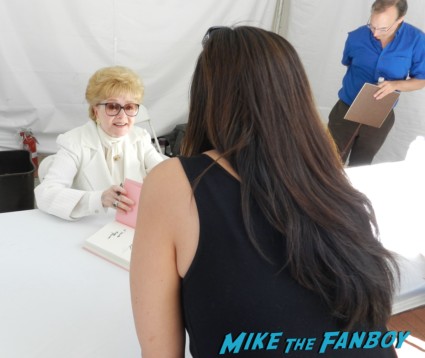 She smiled and said thank you and was just so nice. I ask her if I can also get a quick photo with her and of course, she obliges (so nice!). Mike snaps the photo and then we swap places and I get one of him with her. Time now to move along and let Ace and his brother have a moment with my new bestie. 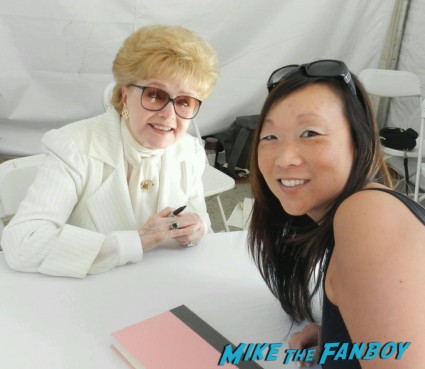 We regroup outside the signing area. Ace is thrilled; he got both his book and another “Singin’ in the Rain” poster autographed. I pause to look at my book, and I squeal, literally. There it is: “To Martha.” She personalized it for my Mom! I hug Ace and thank him! The giddiness overwhelms! Then Mike shows me the pic he snapped of me and Debbie. Now, the giddiness is out of control! 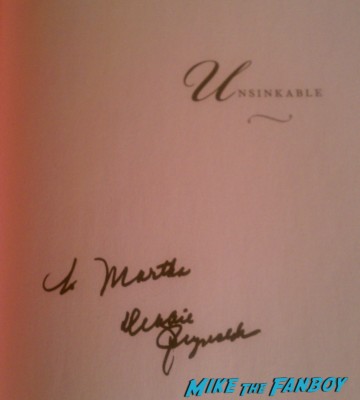 It was such a special experience, meeting someone I grew up loving so much. And to have her be so kind and gracious (read: so not Molly Ringwald) was just amazing. She’s a true living legend. And it’s an afternoon I’ll never forget.