Home / Fanboying! • Throwback Thursday / Throwback Thurs! I Kiss A Girl… And I Like It! After Meeting Katy Perry! She Pulls Her Car Over To Meet Fans!

I’ve been a fan of the Hot and Cold singer for a long long time. And when she was out promoting I Kissed A Girl, I was able to meet the pop superstar. Then she only had a handful of fans, if it was now… There would be hundreds!

She was so kind, stopping the car and taking photos, signing, etc… It was pretty awesome!

On a wonderful Monday afternoon, I convince my friends Scott and Vanessa to wait outside of a television taping for pop songstress Katy Perry. We were all about to go to the premiere of Rocknrolla so Vanessa could lust after Gerard Butler but she said it was okay to take a minute, well hour, for me to wait and see if I could score an autograph of Katy on my limited edition pink vinyl 7″ single of UR So Gay.

5:30 p.m. – Vanessa headed across the street to hang out in the park while I’m waiting for Katy. Katy is doing an appearance on a TV show, and there are about 7 people or so trying to get a signature from her as she heads out. Apparently, (or I was told) she is heading out after today to go overseas for a tour.

5:39 p.m. – No sign of Katy yet, but we do know the taping is over so she should be out soon. One of the guys here said he met her before and she is really nice and will more than likely stop and sign at least one thing per person. Personally, I have never had any luck trying to get someone after a taping like this, but I figure it is worth a shot.

5:43 p.m. – Scott heads out to hang with Vanessa and use the bathroom. We scored tickets to the Rocknrolla premiere so I can’t hang out indefinitely. I hope she comes out soon, but if she’s not out by 6:15 p.m. or so I’ll have to leave no matter what.

5:49 p.m. – A car just drove by with a woman who looked almost exactly like Katy Perry. However, it was just the opening comic from the taping. LOL…. You should have seen everyone run over to her. She just looked out the window and kept yelling, “I’m not Katy Perry, I’m not Katy Perry!” It was like a stampede of people and the comic just had this look of horror on her face.

5:52 p.m. – I just talked to one of the guys and asked him if he thought she left already, but he said that usually the musical guests take a lot longer to leave for some reason.

5:53 p.m. – I really want to ask Katy if she has any cherry chap stick on her, but I’ll probably chicken out.

5:59 p.m. – I have to say it’s a little frustrating because you never know who’s in what car and if the person coming out is the person you are looking for. It’s not like a premiere or other event where you can actually see the person. It would be easy for Katy to just drive off and we would honestly never know.

6:03 p.m. – I see Scott and Vanessa sitting on the park bench across the street waiting for me. I feel really bad. Not bad enough to leave yet, but I still feel bad cause I want Vanessa to get to her premiere.

6:09 p.m. – A car just drove by but no one really reacted. Then it pulled over to the side. Everyone kind of tentatively walks over.

6:10 p.m. – The door opens and it’s Katy Perry! She opens the door and starts to sign things for everyone. Scott just started to run over from the other side of the street with the camera. Katy got out of the car and is so friendly. 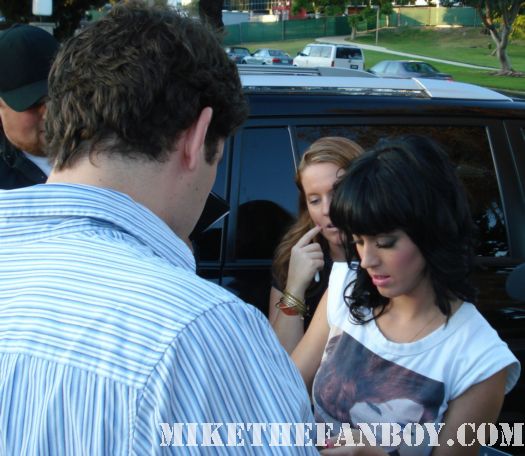 6:11 p.m. – Katy just mentioned that she hates blue sharpies, and much prefers the black sharpies. LOL… Finally she gets to me, and I ask her to use my pink paint pen sharpie. Katy was like sure! One of the other guys said, “That looks so great!” I wanted pink, cause it’s a limited edition pink vinyl, and I thought it would be fun with the pink pen. I know, I over think these things. It was nice that she personalized our items as well if we wanted her to. 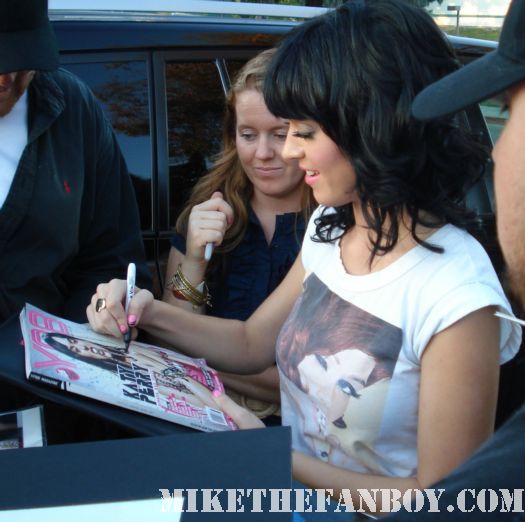 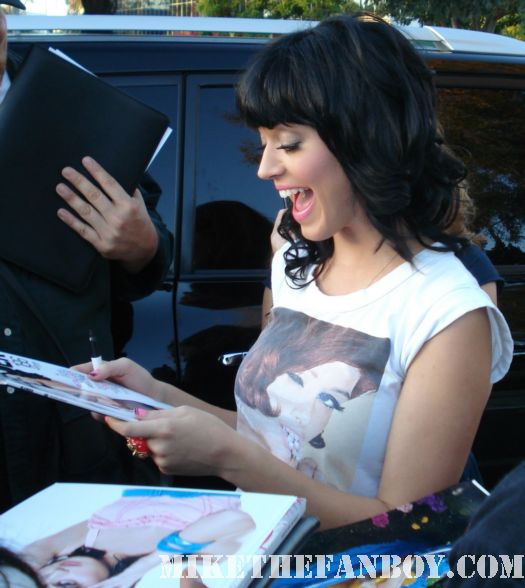 6:13 p.m. – After signing things, one of the other guys asked if he could get a picture. She was so sweet, and sad she would be happy to. Then pretty much everyone there got a picture with her, including Scott and I. 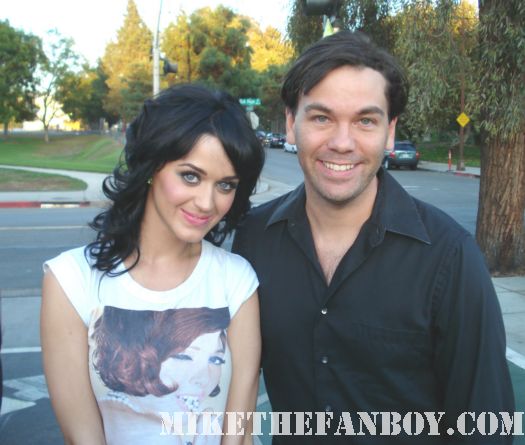 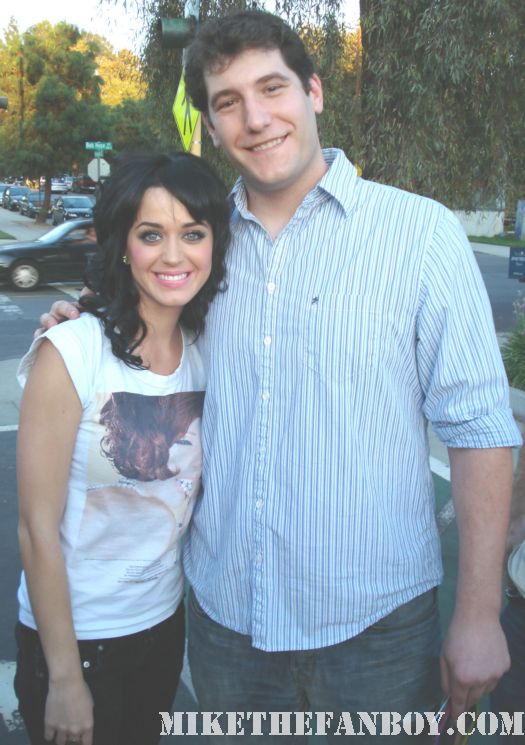 I was really shocked, that one it all worked out, and two that Katy actually stopped. She could have easily just drove by without us even knowing it. Instead, she was so lovely and gracious taking the time out to talk with everyone and sign things. If you haven’t picked up her album, one of the Boys yet, grab it, because it rocks, and so does she. 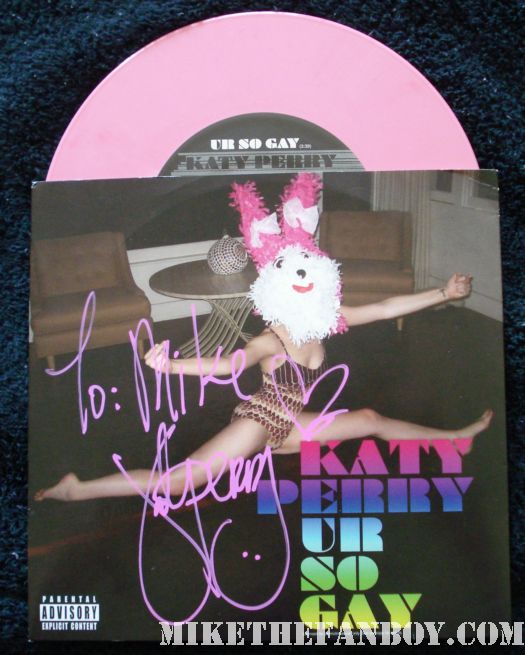