Last night I braved the Los Angeles traffic and on a Thursday no less. For those of you who don’t know, Thursday is the worst day of traffic in Los Angeles. I don’t know why, but it’s true. It’s a nightmare. A complete nightmare.

I sat in traffic for an hour and 45 minutes heading from Santa Monica to Hollywood. Seriously, it was like a parking lot. Why? Why I ask? WTF! Sigh… Still I soldered on.

I called Billy Beer who was on the scene and he refused to answer the phone. In his old age Billy Beer is getting a little more testy and has to really concentrate to get his stuff signed. I understand answering the phone while your waiting for 4 hours is hard… 😉

Billy and I tease each other all the time, so it’s fine. I didn’t know that The Other Mike was on scene as well. Who knew?

I finally start to get close and what happens? There’s no parking… ANYWHERE! Seriously, it’s like everyone decided to park in my usual spots. To top it off, a movie is filming as well. God? Really?

Sigh… Finally I park and make it over. Billy has successfully put his fingers all over my posters. That was kind. lol…

I took my place at the rear of the line and we waited.

Then I needed tape. Oh, that was the bane of Billy’s frustration because he had to get the tape out of his bag. Heavens! LOL…

There are about 25 people here, not too bad.

And then… A giant truck blocks the alleyway. NOOOOOOOOOOOOOO… The science dude had a bunch of crap he loaded into this truck. Grumble. This could be disaster…

And what happens? Kerry Washington leaves right at that moment! Doh! 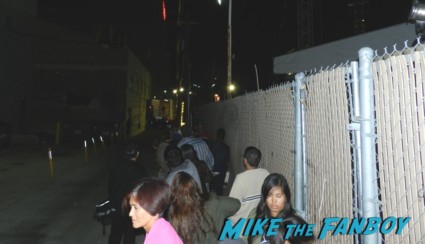 We yell, we call, The Other Mike screeches that he was a Gladiator! Nadda. Nothing. She bolted out faster than Natalie Portman at a Star Wars convention.

The Other Mike ran around and waved it like he just didn’t care. Kerry Washington put her phone up to her ear and did the fake phone call. Doh!

Ah well… After Billy Beer and I headed to Baja…. As in Fresh… mmmm salsa… at least I got something good for all this drama! 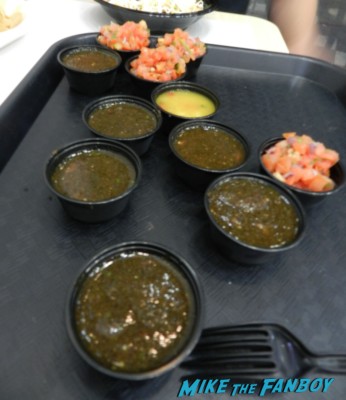