Home / Fanboying! • Paul / Paul Keeps Up With The Kardashians When He Meets Kim Kardashian And She’s Super Cool! Autographs! Photos And More!

Kim Kardashian… The celebrity people love to hate. Whether she’s gyrating with Kanye on a motor bike, or talking about something on her her reality show, Kim Kardashian is someone you either love or hate.

Paul headed out to meet the reality star and it’s an interesting tale. LOL…

Alright people Thursday was a strangely good day I met somebody I have little to no respect for and she won me over.

That’s right Kim “mayor of Glendale” Kardashian at a top secret talk show.
After getting heckled at by the folks at starworld for buying a Kim Kardashian photo (I was self mocking as well) I arrive at the secret spot and see about 10 paparazzi folk being hyper aggressive (kim is big $ I guess)

And greeting the friendly ones I go to where the grapher section is and run into none other than cousin sal & Dickie Barrett. I congratulate sal on the birth of his third son and chat with the guys for a little bit. Then I am joined by a few other graphers/dealers/whatchamacallits overall it wasn’t the friendliest crowd (no fanboy crew in site) so time for Kim’s arrival the escalade pulls right up to the door and nobody gets anything (no pix,no wave nothing)!!

Suddenly Hollywood superman shows up and provides some amusement while 3/4 of the graphers and paps leave thinking she won’t sign now. I was feeling positive she’d do it on the way out and I was right!! As soon as the interview was over she was escorted over and looked fantastic with the post baby glow and everything she started signing for the people in the middle first then looked at my photo and did a full signature 🙂 and then I politely asked her if she’d sign my people magazine wedding special she politely declined lol! Then she chuckled when I said “I tried eh” 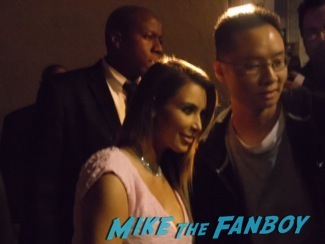 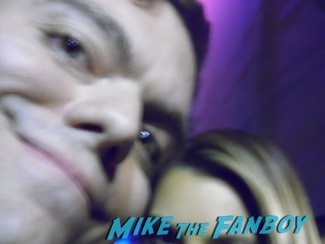 and she asked how it came out and I got another and had a certain Mary take it I then proceeded to leave and get really for a miserable night at work. 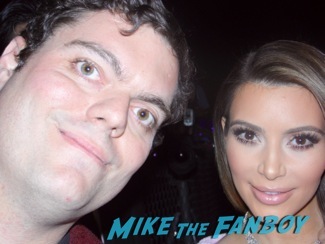