Home / Reviews / Kung Fu Panda 1 And 2: The Ultimate Edition Of Awesomeness DVD Review! Do The Original Two Films Hold Up?

There are many animals on this earth, they are big, they are small, but there’s very few as cute as a Panda (except maybe French Bulldogs!). Panda’s are big, they are cuddly, I think everyone would love to have a Panda they can call their own. Who wouldn’t. It’s no surprise then that the Kung Fu Panda films have become such sensations. 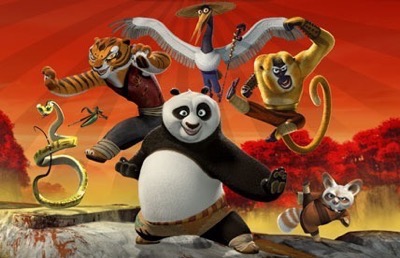 With Kung Fu Panda 3 about to hit theaters, the first two films have been released in the Ultimate Edition of Awesomeness! I’m not 100% sure about that the last part, but I have to tell you both films hold up really well. Jack Black voices the lead character, a Panda named Po who works in his father’s noodle shop in China.

Po has dreams, big dreams. He wants to be a powerful warrior, so powerful in fact that even the Furious Five, a collection of China’s best and most feared warriors, would envy him. Po however, is overweight, and gets out of breath just looking at a flight of stairs. Not exactly fighting material. Po can dream right? He can play with his Furious Five action figures and long to be the hero in his own story. 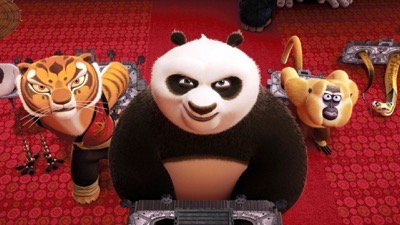 One of the Furious Five is going to be awarded, “Dragon Warrior” which is a special recognition that is only given to the most power Kung Fu Master. Po has to be there and heads to the Jade Temple, he sees the giant steps and makes it to the top but he’s seconds too late. The doors close and he’s shut out of the temple never to see the ceremony take place. Even though Po isn’t exactly physically fit, he’s determined to make it to the ceremony and in doing so he finds himself dropping into the middle of the ceremony… Literally. 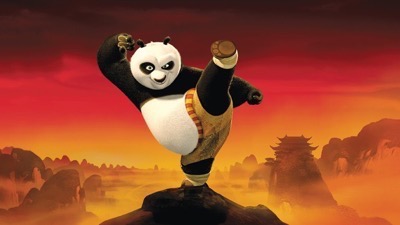 Oogway (Randall Duk Kim), an ancient Kung Fu Master, then chooses Po to be the Dragon Warrior. Say wha? The Fabulous Five are steaming mad and protest. However, Oogway insists that Po is the Chosen One and will not relent. Tigress (Angelina Jolie) is livid and Master Shifu (Dustin Hoffman) is given the task of training Po. A task that no one would want to tackle. Plus, he has to train Po before Tai Lung (Ian McShane) a seemingly unstoppable enemy escapes captivity and destroys the Chinese Countryside. 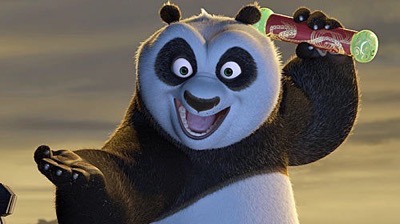 Animation has been an interesting medium throughout the years, starting with hand drawn cels and moving to the more streamlined computer animation. It’s a skill and an art that too often gets taken for granted. When an animated film is good, it crosses over between a childhood classic and a film that adults can love as well. This is where Kung Fu Panda succeeds really well. It’s fun for everyone and even has a life lesson or two thrown in for good measure. 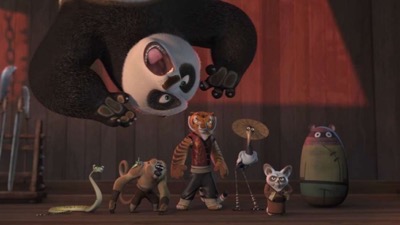 While I’ve never been one for voice actors being replaced by stars, in the Kung Fu Panda films it works really well. Jack Black is perfect as Po and Angelina Jolie is a great Tigress as well. Both lend more to their characters than just their voices and inject a level of humanity and soul into each character. It’s so interesting to see them both in animated form. 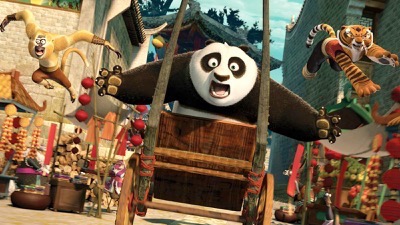 The best part about the Kung Fu Panda films is that, Po isn’t your everyday hero. He’s an overweight and some would say slovenly Panda, who rises against all odds and saves the day. He’s average, and in this story at least the average guy can win, even when no one believes in him and the odds are stacked against him. It’s a theme that’s so important and so perfect for kids these days. So much is going on in the world, and it becomes overwhelming for adults, let alone impressionable children. It weighs on even the smallest subconscious. So seeing a film that says, that someone, no matter what they look like, no matter where they come from, no matter who they are, can rise up and save the day.
That alone is worth the price of admission to me. 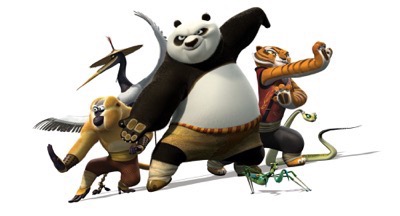 I have a DVD version of the film, so while it’s hard to judge the picture quality to the far superior Blu-ray releases, I will say that it looks good in a high definition viewing environment.

Special features include a full disc of bonus material that runs over 80 minutes. There is a director’s commentary, a Meet the Cast featurette, Pushing the Boundaries Featurette, Sound design bonus, a sneak peak at Kung Fu Panda 3, and even three new featurettes.

It’s pretty impressive for a DVD release and a definite reason to pick up this one even if you already have a previous version. 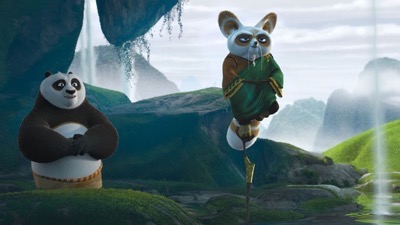 Overall, there’s so much to love in the Kung Fu Panda series, both films will delight kids of all ages. They are a good example of why animated features should be made, they are a positive influence for kids to look up to and relate to. I know they are huge hits in my household.