I felt so bad… You know… The thing that sucks is when you go to an event with friends and one person gets something and they are super stoked and the other don’t. It’s just not good for anyone. I wish I had something generic I could give to Susan but I only had two really key pieces of memorabilia so I couldn’t.
I’m talking about when I was able to meet Mr. Kurt Russell. As you may have read in my write up, he was super nice outside but inside he didn’t sign.

Now, the thing is, no one should put their hands on another person, I don’t care if you’re a security guard or a police officer. It’s not necessary. It’s rude, It’s uncalled for, and frankly is assault. Asking for an autograph is not a crime. Period.

When I got up to use the restroom the security guard made a gesture like he was going to block me. I got up during the q and a, really what was I going to do run up to Noah Wyle as he was talking and ask him to sign my DVD cover? Come on.

This was a pretty epic fail and I feel so so so bad for Susan and Jack.

Check out Susan’s full recap after the jump!

I hate the dwell on the negative, so I’ll make this write up short and sweet. Make that short and bitter.
I got tickets for the Cape Town festival’s screening of Escape from New York with a special Q&A afterward with Kurt Russell! Kurt is high on my wish list and he’s never out so this was the perfect opportunity!

I headed down early and only 2 people were in line ahead of me. One of them was MTF family member Jack. Yay! Mike met us a short time after and this looked to be a promising evening. We got seats in the front row, left side. For some odd reason, this evening had a special screening of the first episode of “Falling Skies” new season. Normally, I would be excited, as I love Falling Skies, but I had a rough two weeks and was feeling very tired. 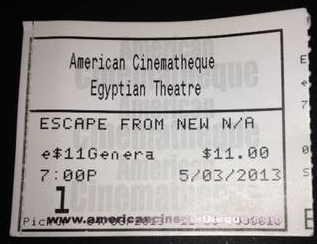 After the FS screening there was a short Q&A with Noah Wylie, Moon Bloodgood and Maxim Knight. I have a very cool FS poster from Comic Con 2011 with all the cast members’ signatures… except for young Maxim. Did I think to bring it along? Nope. Oh well. I guess missing a 12 year old on my poster isn’t that big of a deal, but it would be cool to have it completed. When is that kid very going to be out again anyway? After the Q&A, a band came out a played one song. Yup, ONE song – The Ballad of Snake Plissken. It was actually the song, Hey, Hey we’re the Monkeys with different lyrics. Why oh why would they add this? 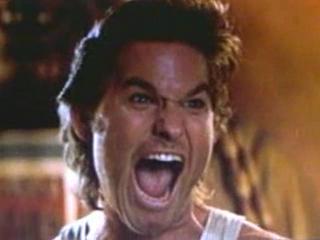 It’s now 8:30 and the screening for Escape from NY is about to start. Mike went outside to check the parking lot and sure enough, as you may have read, that was the place to be. Mike opted to try there and I opted to go inside. Totally my choice and totally wrong. Honestly, without getting too personal, I had a very mentally and physically exhausting two weeks with no end in sight and I just didn’t have the energy to stand outside for hours when I had a comfy seat inside. I had also convinced myself that we were in a perfect spot, as the guests were walked out right past us, within inches, so we should be all set. 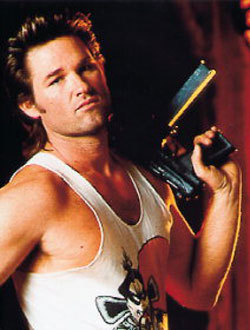 After a long Q&A with Kurt (that guy likes to talk) he was escorted out by an overzealous security guard. Jack and I stood, items in hand, waiting to politely ask Kurt if he’d sign. Said security guard shoved me back, using his full palm, right in my chest. I hadn’t motioned to Kurt, moved in, or leaned in, and he shoves me. SO NOT COOL!

I came to learn that Kurt signed outside on his way in for 30 or so people (you’ll read all about it in Mike’s write up).

Mike and Jack were total gentleman and walked me to my car, as it was already 11:30pm. To add insult to injury, I had a nice $58 parking ticket waiting for me. I always use a lot, I never park on the street and this is why. Twelve bucks at the Dolby is better than 58 to the city of Los Angeles anytime.

I learned two very important lessons that night. One, Mike the Fanboy knows best; always listen to him.

(Editor’s Note: LOL… I would say listen to me half the time, but you just never know! M-)

And two, when Mike the Fanboy says “we’re fucked,” he’ll be going home with at least two autographs.

(Editor’s Note: Okay, this made me laugh out loud… Literally. Cause I say that all the time! Doh! M-) 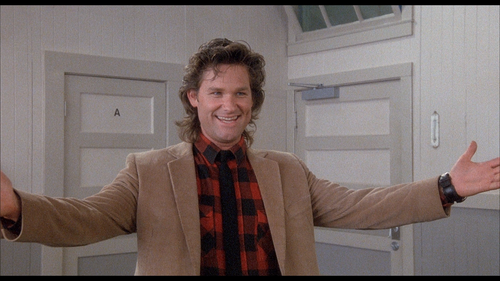