Billy Beer headed out for a fun event at the Los Angeles Film Festival. There was a great q and a with several stars including Demian Bichir, Alfred Molina and Abigail Spencer… Oh one more person, Ms. Olivia Munn.

Billy does love him some Olivia Munn so he headed down to the event and had an awesome night.

Welcome back to The Great Graphing Outdoors with Billy Beered.  Today’s an exciting day!  I’m off to go to have some coffee talk at the LA Film Festival with Mike the Fanboy’s 2013 #7 top signer Ms. Olivia Munn!!!!  Not only that, but  Demian Bichir, Alfred Molina and Abigail Spencer will be there too.

It’s a fun little thing that they do with the actors and actresses they just sit around for an hour or two and shoot the breeze about acting.  I was just going to wait outside and hope to get them when they arrived, but decided to pay the $13 and check out the fun.  Of course there’s a number of actors in the crowd trying to soak in everything they say.  Most of the talk and questions dealt with how they got there big breaks, and any words of advice.  I was enjoying the comedy of all of the actors.  Abigail was impressed with Demian’s ability to make “Spicy Guacamole” which a recurring joke. 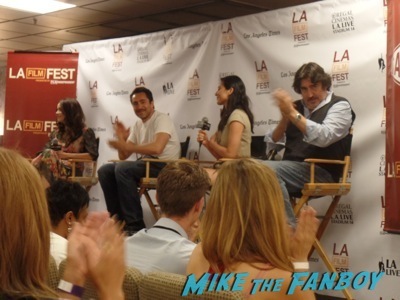 The best story came from Alfred when he admitted to only telling a director the truth once.  He was up for a part and the director ask him to come back to read again.  In a little bit of an arrogant move, he told the director that he should already have what he needs.  The director then tells him that he had Deniro read for him 12 times one time.  Alfred then thinks about it for a while and calls back the director.  He tells the director this could mean one of two things.  One, that he thinks of Alfred in the category as “Bobby”, and if that’s the case he’s very honored.  Or two, if he made Bobby read 12 times, he has a really bad judgment in talent.  Frickin Hilarious!!!  He didn’t get the part.

As it ended, it was kind of funny.  I think there were more people there to give out business cards then there were people trying to get autographs.  I for some reason only had things for Olivia.  While I’m waiting for her, I snap a quick picture with Abigail an told her I really enjoyed the show. 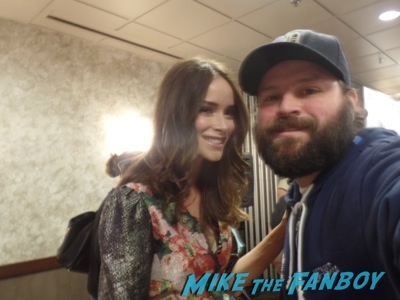 Olivia is going to town!  She is signing and talking pictures with everyone that wants one.  She’s interacting and having fun with the crowd.  I literally wait till everyone is done, cause I know she’ll stick around (again, #7 on the top ten list!).  While she’s signing things for me that I printed for my Co-workers and myself, she was asked if she was a Packers fan now (she just started dating Aaron Rogers from the Packers).  She says “yup” and then asks what team we root for.  I tell her the Lions, which she then responds, “well then you can root for the Packers while they’re in the playoffs and the Lions are at home”  OUCH!  BURN!!!  I politely respond by asking her to sign my next picture “To Aaron, GO LIONS”.  She got a good laugh out of that.  After I got my 3 pics signed, 1 for me and 2 for coworkers, I tell her that her pictures are going to be the new wallpaper at my office.  I know, I’m full of good jokes today!  I ask for a picture, and she couldn’t hold back her enthusiasm to do so! 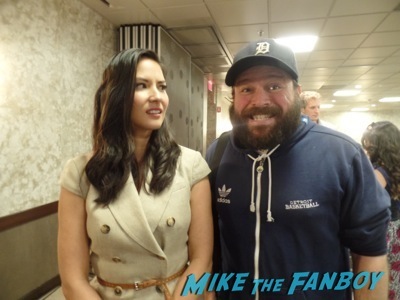 On my way out, I see Demian and Alfred, I decide to take pictures with them too.  All the people involved couldn’t have been nicer!  Wish all the events were this nice.  Well, I’m off to go comb my beard.  Until next time kiddos. 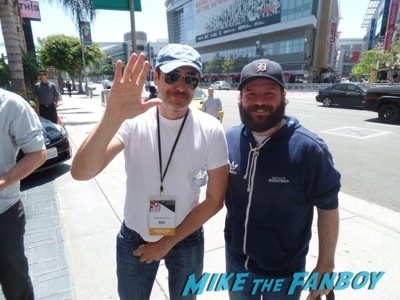