I’m so excited! I just got this great recap from Lady Samantha! Yep, that’s the best faux British nickname I can come up with! Doh! This is Lady Samantha’s first report for us here at MTF so give her a warm MTF Welcome!

Now, this is a wonderful recap of Lady Samantha’s night out on the West End. For those of us yanks, The West End is the theater district in London, sort of like a mini version of Broadway. At least I think that’s right… If I’m wrong, I’ll let Samantha correct me!

Anyway, this is a great example of being quick on your feet and having backup’s can be great in this hobby. Although, just hearing Samantha’s barely missing Jennifer Saunders and Joanna Lumley made me tear up a little.

My friend and I had been looking forward to the press night of “Viva Forever” for a couple of months. The day arrived mid December on a very cold day in London. My friend rang me and asked what time we were meeting and I had a really bad feeling about going. I said to him I don’t think I will go as I think we won’t get anything. So 30 mins later I was dressed and ready to go after thinking I may regret this night if I don’t.

I arrived in London around 4pm. Spent forever trying to work out how to pay to park by phone and then arrived at the Piccadilly theatre to find they had done the worst thing they could to the fans. They had an 8ft fence up covered in black plastic. So this blocked out all views of the theatre and anyone arriving. The only space for fans was 6 people long and it was 8 deep. So my feeling was correct. Looking later online I missed all of the Spice Girls, David Beckham, Dawn French and Jennifer Saunders, Joan Collins, Joanna Lumley to name a few.

So we decided to do theatres instead. So went to catch 2 of the cast of “A Chorus Of Disapproval” – Ashley Jensen and Rob Brydon. Ashley is obviously known for “Ugly Betty” and Rob is known for “Gavin & Stacey”. I am a big fan of |Ugly Betty” and had previously been and gotten Ashley on some Ugly Betty items. She happily signed my “Gnomeo & Juliet” photo 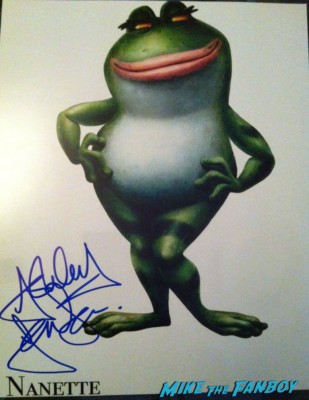 and was concerned how cold we looked and thanked us for waiting. 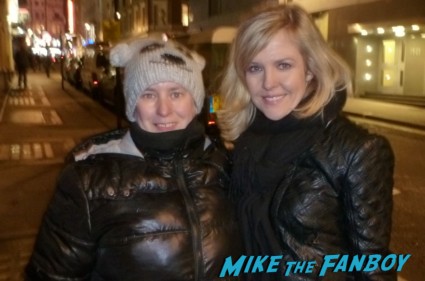 Then Rob arrived and he signed my photo from The Gruffalo’s Child (snake). 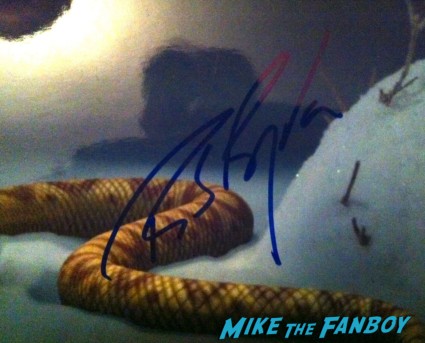 We decided then as it was so cold and we had 3 hours to wait to the next play ending to get some Chinese food. On route we saw a charity night was being held at the Odeon in Leicester Square for a new British film called “Quartet”. We decided to wait to see who arrived and managed to get Sheridan Smith who signed my “Mrs. Biggs” photo. “Mrs. Biggs” being a UK series that was about Ronnie Biggs wife (Great Train Robbery). Then Billy Connolly arrived and he was happy to sign 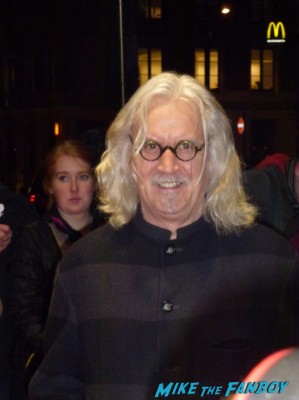 and I got him in my autograph book. 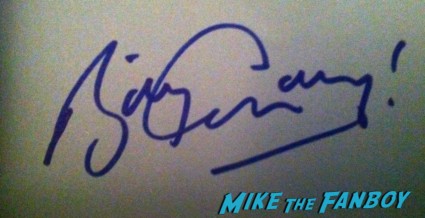 Then we left as it was now -6 and my feet were now so cold I could hardly feel them and we needed some food.

Having previously gotten 1 of the 2 from the play “Constellation” prior to its West End transfer I knew how friendly Sally Hawkins was. After a short wait we saw Sally Hawkins exit the theatre and start running towards the tube station. We took chase and she said she rushed off as she had to catch a tube home but was happy to sign the photos we had. 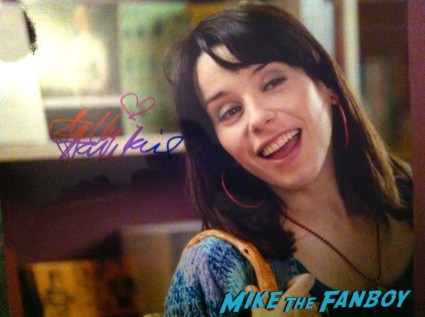 Rafe Spall was also in the play and I had never got him previously so had him sign my photo from “Prometheus”. Rafe is the son of actor Timothy Spall for those who don’t know and is a very great actor himself. 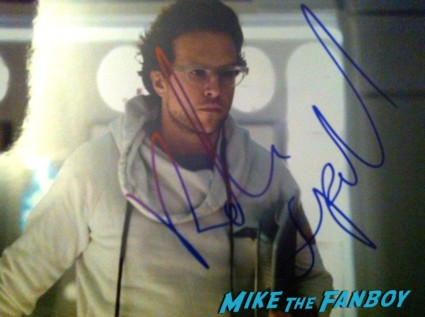 I then said to my friend I am going to go and get the cast of “Cabaret” and he wanted to finish off the cast of “Our Boys” which starred Mathew Lewis (Harry Potter), Arthur Darvill (Dr Who), Laurence Fox (Billie Pipers husband) and a few other actors. I had already met them and wanted to get Michelle Ryan (Bionic Women & Eastenders) again.

We both headed over to “Cabaret” and waited for 1 hour before Michelle exited. She happily signed my “Bionic Woman” photo and added her character name. We then waited for Will Young (singer) who I didn’t find very friendly the 1st time of meeting him and he signed my “Cabaret” photo which Michelle had signed previously. 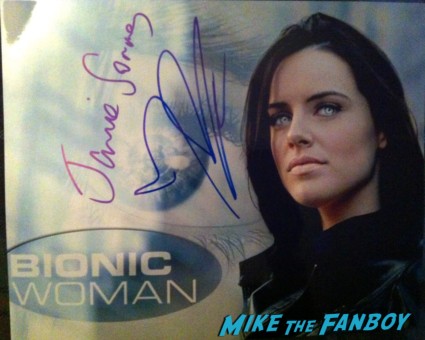 By this time it was 11.20pm and I had been out since 4pm! So I headed home cold but very happy with what we had managed to get.