Sometimes you want to know what Pepsi-Cola tastes like, but then there are times when you realize maybe you should avoid soda altogether. Two weeks ago, I got a “stomachache from trying to enjoy soda too much” when I attended a Walk of Fame ceremony when wanting to FINALLY MEET Lana Del Rey.

Now I can confidently say at least 50 to 75% of the audience were primarily motivated by one of the guest speakers, Lana Del Rey, instead of the honoree Guillermo Del Toro for the Walk of Fame ceremony. Legitimately if you looked in the waiting crowd almost everyone had something for Lana whether it was photos, CDs, posters and/or magazines. If you were walking by, I would suspect you thought Lana Del Rey was getting a star.

The morning was hovering in the high 90s and on the brink of triple digits by the time the actual event started. Scotty the Music Man was kind enough to join me and despite our initial hopes, it soon blossomed into full blown pessimism. Considering Lana hasn’t been out in public for quite some time, the most peculiar people came out. As a matter of fact, the person directly in front of us drove over 100 miles actually believing he “would physically sit in the actual ceremony” and kept swaying back & forth the entire time, which was frustrating. Sadly, Lana’s signing and fan interactions have drastically changed over the years due to horrible situations i.e. fans stalking her & jumping the fence at her once LA property, the pop-up fiasco, etc. Keeping that in mind, we knew it was going to be a strong reality of summertime sadness.

As luck would have it, we stood directly behind the celebrity guests and waited patiently for them to arrive. Lana literally arrived minutes before the event with her mini entourage including producer Jack Antonoff. Sadly, the fan reaction was stronger for her instead of Guillermo, but it seemed there was a sliver of hope when she recognized and made eye contact with someone standing near us. 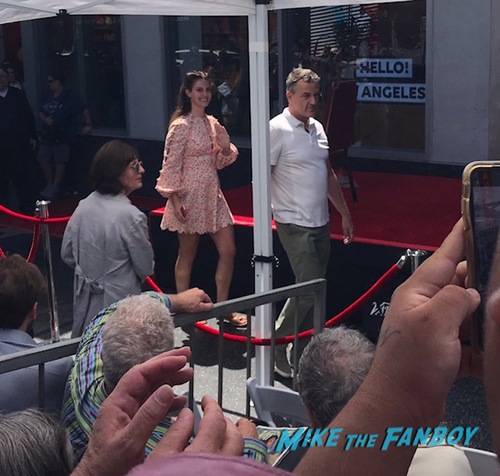 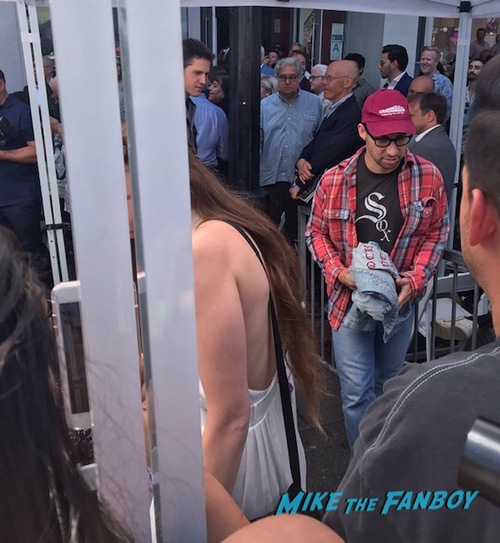 The event ends and after taking the obligatory pictures in front of the star, Lana’s hanging out and talking to the other celebrities. Intermittingly dozens of people on the other side of the barricade were able to take selfies with her. Reluctantly and eventually Lana comes towards us and to the guy literally next to Scotty & and I (we’re in the second row). Lana winds up taking two selfies with him, including one which the guy is kissing her on the cheek along and gives him a personalized autograph too. Both my picture disc and Scotty’s magazine keep getting overlooked despite being right in front of her. Sadly, she looked around and despite having photos and different products such as CDs posters etc. out Lana was being extremely picky and choosy with what she was signing. Lana would maybe look at 7-10 items, but only would sign one of them, look around, and take a selfie. Honestly, she was more adamant about taking selfies than autographs before taking off. 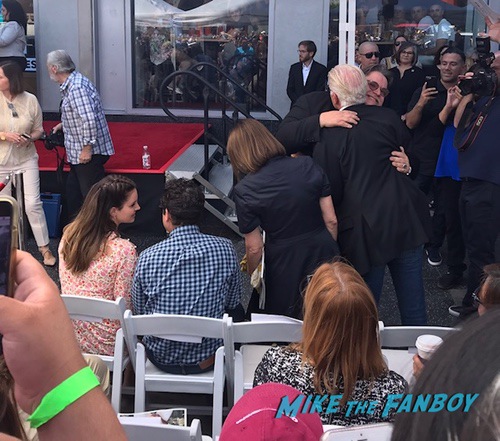 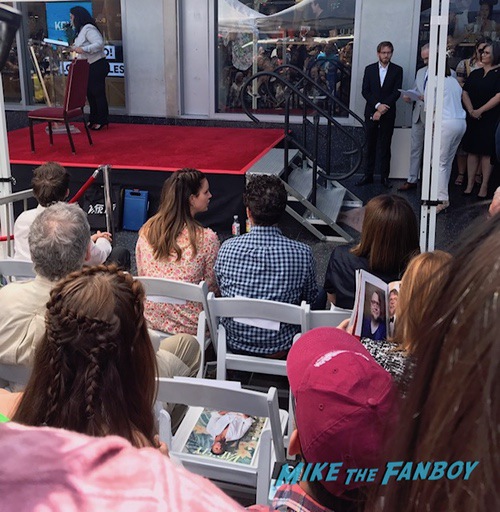 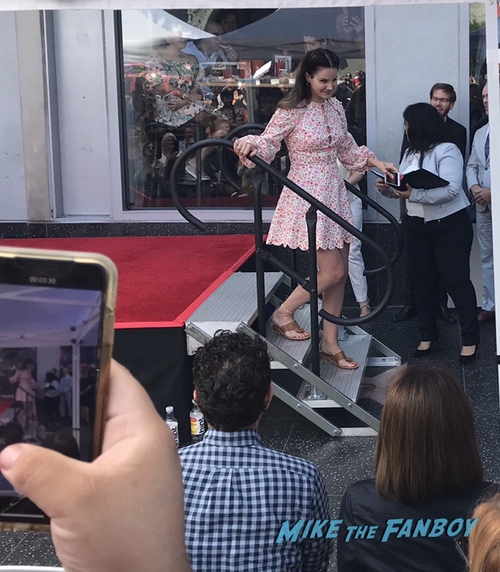 Almost like a tease while walking away, a barrage of people on the other side of the barricade got more selfies and pictures with Lana literally standing feet away from fans. Believe it or not she then somehow got convinced to sign a handful more of autographs in a different section, but left after only signing a few autographs. From Scotty and I’s perspective she may have signed 10-15 autographs (TOPS) at the ceremony and took more selfies. Adding insult to injury, she unofficially created a meet and greet queue with people getting their few seconds by taking selfies/pictures. Eventually she left and I waited for Guillermo to greet the crowd again. 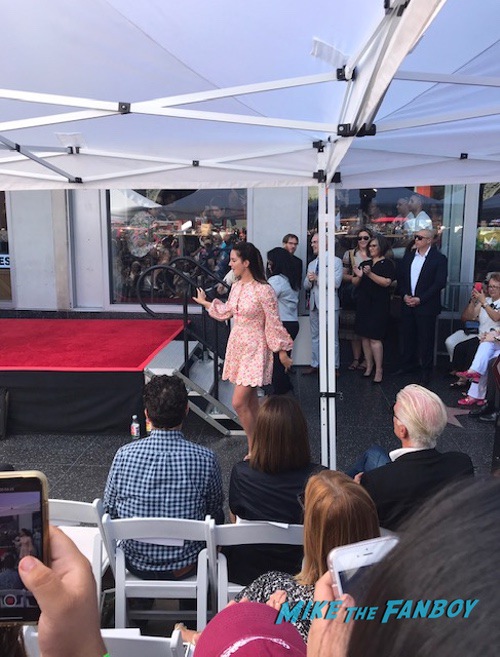 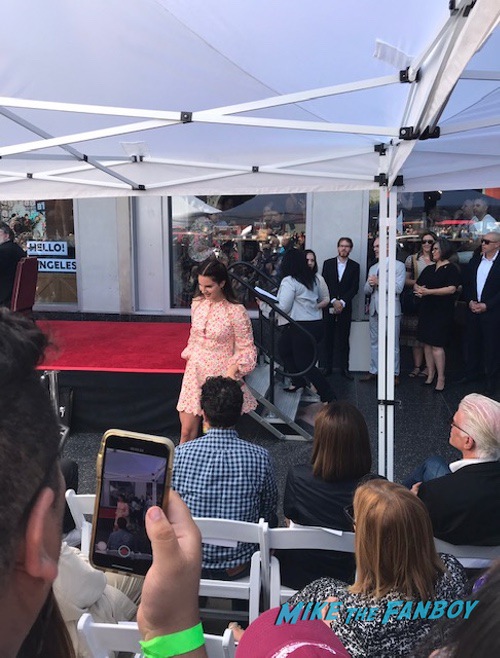 As soon as Lana left, literally 50-75% of the barricade left. Considering curiosity got to me I checked out the exits afterwards to see what shit show might be transpiring while Lana left. As you can imagine and can see in these pictures, it was bat shit crazy. There were dozens of people deep surrounding a SUV with absolutely no movement and impossible to move around. The complete chaos was absolutely absurd watching it unfold before my eyes. I took pictures from a far and still can’t believe the craziness. Needless to say once I finally found Scotty, we agreed it was a “complete f*****g crazy mess.” 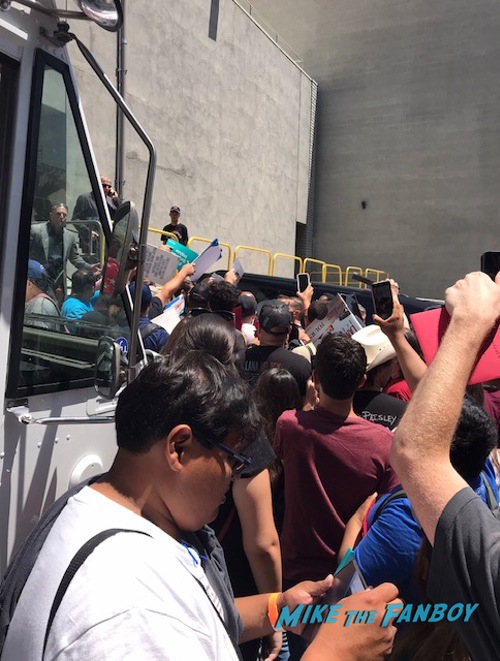 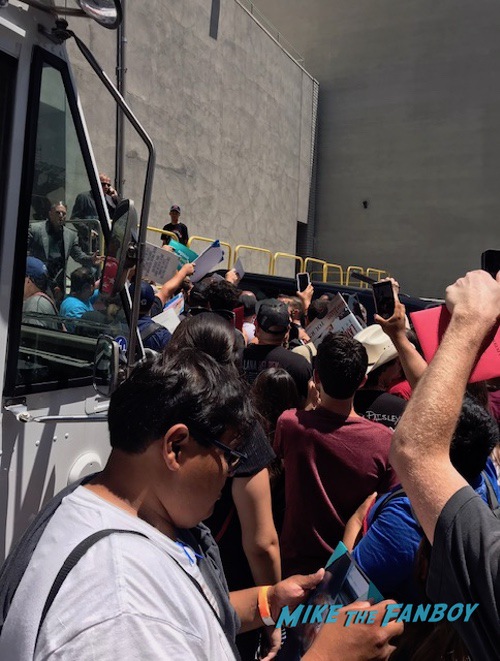 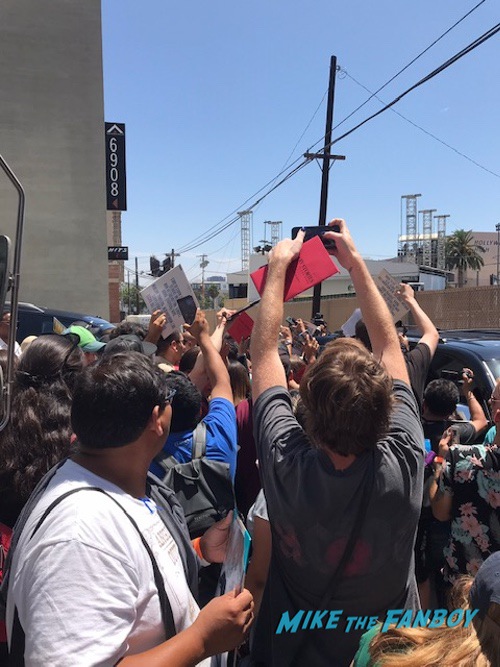 Why would anyone act that way? In that case I really don’t blame her and can understand her reluctance to sign/meet fans. Still, it sucks literally being to the left of someone and they go the opposite way while you’re standing right on front of them. Needless to say these are the times when it’s frustrating being a fan, especially since I was trying for a friend. Being a fan can be frustrating, but it’s ridiculous when people lie and exaggerate right next to you.

Besides being calm, can we all agree not to use and abuse mentioning sexuality and/or ethnicity in order to get a celebrities’ autograph/picture? Unfortunately, I heard this WAY TOO MUCH for both Lana Del Rey and Guillermo Del Toro. Honestly, with all that it was a frustrating fanboy fail for Lana, but otherwise a very fun day indeed.