I don’t think there’s a bigger fan of Daniel Craig than Elisa in the Big Apple. I mean, she’s a big big fan! Such a big fan in fact that she simply had to see Daniel when he hosted Saturday Night Live a few weeks back.

Now, I’ve never gone to a taping of SNL, and Lord after seeing all the effort Elisa had to go through… I don’t think I’ll be doing it anytime soon! LOL… Elisa did get to meet some of the SNL stars and had her night with Daniel Craig!

Check out her full recap from her night at SNL with Daniel Craig!

If there’s one thing you learn about me, it’s that if I’m a fan of something or someone, I’m a die-hard dedicated fan.

So, as soon as I heard that Daniel Craig, one of my absolutes favorite people in the ‘verse, would be hosting SNL this season, I knew I HAD to go. Through my interaction with him during his ‘A Steady Rain’ days, I knew he was funny with a quick wit so I was hopeful that that would come across to others who know him as a more serious actor.

When they finalized the date, I immediately told my work and took the days off. Oct. 5&6th were the days I planned to camp out, numbers are given out the Sat morning before the rehearsal/taping. I knew I wanted to go to the rehearsal so I’d get more Daniel time!  As I researched, I started getting worried about getting there Friday so I started thinking about maybe Thursday evening after work. It turns out, they gave me Thursday off too. So, I’m set!

As the date approaches, I start psyching myself out, thinking Thursday evening still isn’t early enough.  I set my sights on 11:30AM Thursday. I take with me an air mattress, my backpack full of my iPad, computer (to charge my iPad and iPhone) and various Daniel Craig related items, just because. The line seems to not have begun yet and I head in to talk to security, making sure I’m lining up in the correct place; I am and I settle in. 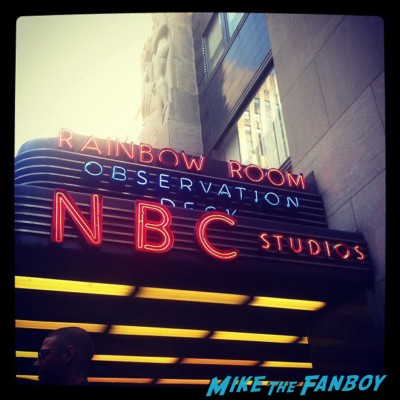 They set up the barricades about an hour after I get there. It takes 6 1/2 hours for anyone to join me;  I just sit, checking twitter occasionally, watch a few episodes of Castle and enjoy the city life. As night approaches I begin settling in, chatting with those around me. The group behind me were SNL fans, one of them had attempted to go the prior season (she was 9th in line) and ended up not getting in! I was relieved to be first. Those behind them were Musers. Apparently I was the token Dan fan. Ha! Throughout the day I saw a few celebs coming in and out of 30 Rock, most I don’t remember at this point… Keke Palmer and Archie Panjabi, among those I do.

I slept rather well through the night. Okay, that’s a lie. I got roughly 3 hrs total sleep. But it worked and the next morning I got up, killing time by chatting with the newcomers and hanging out. I spent the day poking around on the Internet and wasting time any way I could.

I’ll fast forward to getting our actual tickets since two days of just sitting on the street in NYC isn’t really all that exciting.

Saturday morning, I managed to get a few more hours of sleep and when I woke up, I see a girl standing in front of me. For some reason, people seem to think I’m the end of the line. 1) Why would they end the line at the FRONT of the building? 2) Why not ASK someone if thats the end? Multiple times that morning people tried to join the line. I just don’t get people.

7AM they start handing out tickets. I’m the first one (of course) and I chose the rehearsal. They end up taking two stacks of tickets, an additional stack for the line that continues on 48th street because apparently the Saturday before, people were cutting in line where it breaks off to the other street! Crazy. 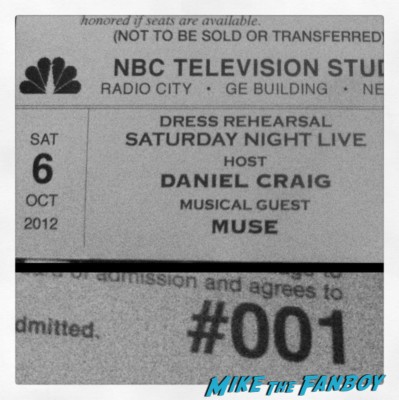 I’m happy that I got my ticket so I head back home. It takes me an hour longer than it should because I can’t read with so little sleep and I go to a stop where my line isn’t even running. Smooth.

I’m supposed to head back to line up for the rehearsal at about 6:45. AS I do, I end up running late but get to 30 Rock on time. Everything was just as organized as I thought it’d be and we patiently wait to see who will get in. I talked to a crew member the night before who said a lot more standby have been getting in because they took away some tickets from the crew. 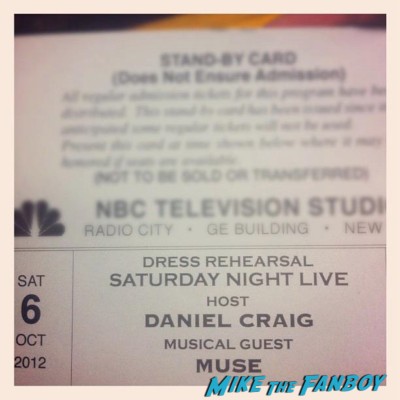 The page handling the tickets seems to be certain I’ll get in. Ever the pessimist, I still try not to hold my breath. They move us close to the elevators. 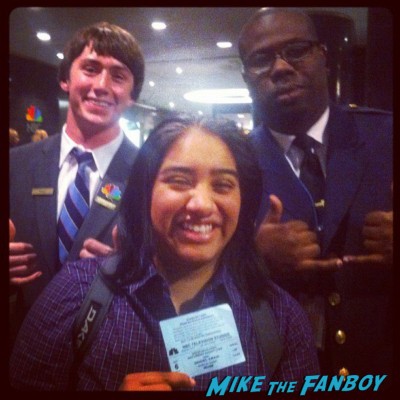 And then into the elevators. We head up. Some lady who comes to the show all the time races ahead of me into the studio to grab a seat. She ends up with a FANTASTIC seat. I end up at the farthest seat to the right section of the stage. I can barely see anything. I’m disappointed but at the same time thrilled because I’m IN. There are TV sets everywhere so I know I won’t really miss anything but I was thinking I would’ve like to see more of what was going on. 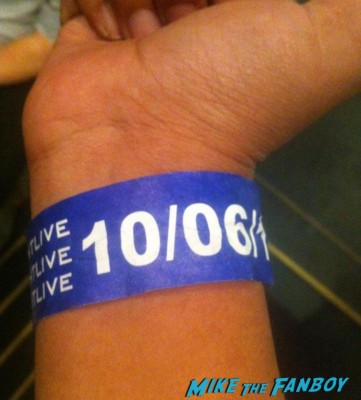 I end up loving my seat. While they’re doing the first sketch (a debate sketch), I watch everything going on around me, hoping to see Daniel. I catch him walking behind the sets to get ready for his monologue. I start FREAKING out (quietly, of course). He’s looking oh so handsome in a suit. I get more excited. The monologue is cute. It’s longer than the aired version and Daniel seems nervous but still at ease. He fumbles a couple of lines but they’re hardly noticeable. All I can think is, I’m here.

They end up cutting three sketches. A sketch that is just ridiculous but awesome at the same time. It’s the Price is Right auditioning male ‘models’ to showcase items. The ‘model’ is Keenan Thompson, who’s playing a bat expert. He does some sort of jerky motion to the music and though the casting people like him, they bring in the model they’ve already hired to help him out. A blonde wigged Daniel walks out in tight leather pants and a white patterned button up, the top few buttons exposing some crazy chest hair. He looks insane but those leather pants work. Hehe. He proceeds to thrust at all the prize items… It was beautiful. His wife’s a lucky woman. Haha!

The second sketch they cut wasn’t all that funny. But again, Daniel was in a crazy safari costume.

The final sketch they cut was one of my favorites. Daniel was dressed in a gym outfit, tight shorts that fit VERY well and a nice shirt that showed off his muscles. He was new to the gym and sat lifting some weights as the people exercising around him grunt songs. He starts singing along and they freak out. It happens again and when they call him out again, he storms out angry. It was a cute sketch that had him singing so I approved.

One of the best moments was during the Regine skit. I saw Daniel directly below and to the left our seats. He’s with a woman and they’re getting ready for the next skit, waiting outside a door into the set. The woman ends up being Fred Armisen. He’s playing Daniel’s new girlfriend. The skit goes smoothly until Fred sits on Daniel’s lap and Bill Hader breaks. Then everyone else breaks. Daniel starts to giggle too. They try to get through the rest of the skit. They do finally compose themselves. Such a great moment.

The show ends and we all file out. I head to the 50th St. side of the building and wait, hoping to catch people walking out. Somehow, we end up following some people we met to where the after party is. Three hours later, I have pictures with a lot of the SNL cast and a bonus picture with Tony Award Winner, Nina Arianda whom I’m a BIG fan of. 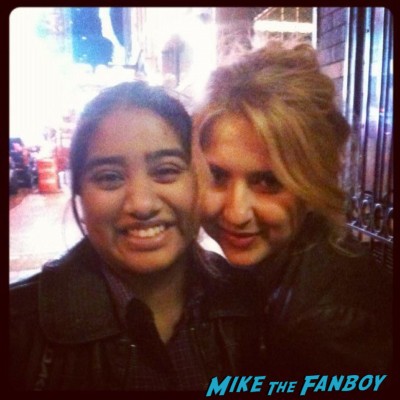 She is so sweet and even introduces herself to me. I tell her how much I loved her in Venus in Fur. So awesome. 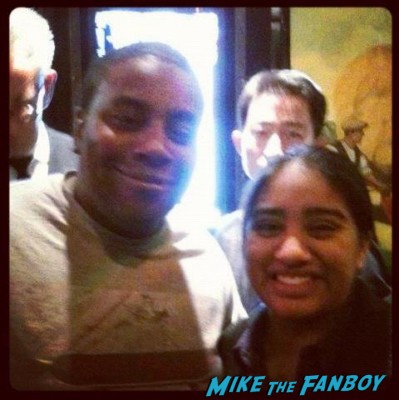 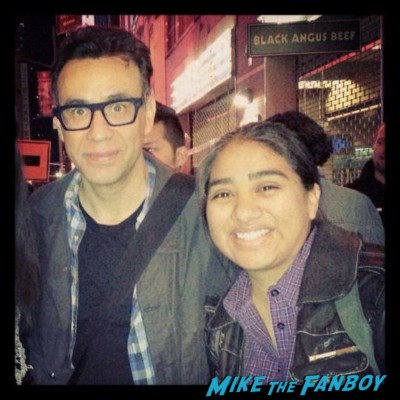 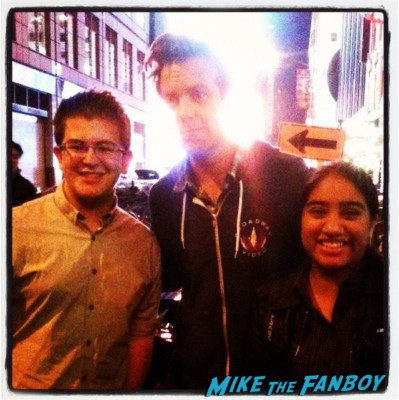 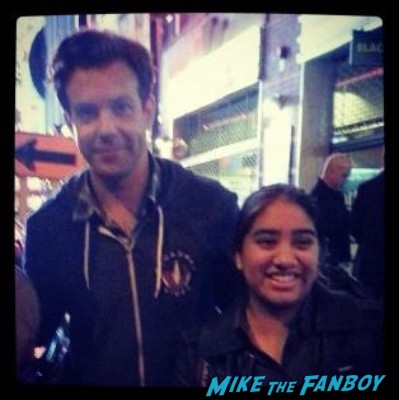 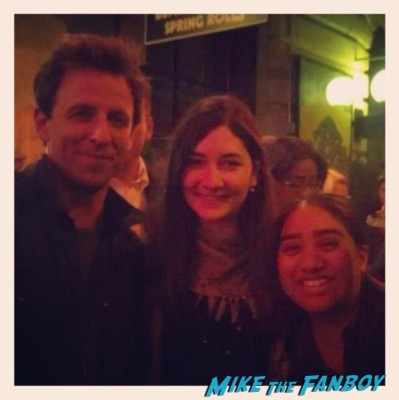 At about 3:55, Daniel Craig and Rachel Weisz leave. They don’t stop for autographs but he apologizes to every one for not stopping.

Thus ends the whirlwind three days. So worth it. I head home, realizing I have to be at work in less than 6 hours. The next morning, everything still feels like a dream.