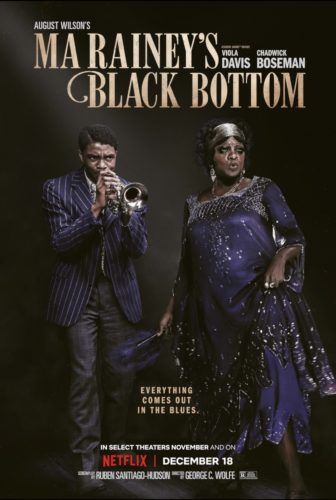 Posthumous performances aren’t always what they’re cracked up to be. Sadly, the same can be said about “Ma Rainey’s Black Bottom” despite two terrific performances by Viola Davis and Chadwick Boseman.

Based on August Wilson’s play, the movie portrays Ma Rainey as the last of her kind, a pivotal pioneer “popstar” dealing with the emergence of big bands. Set in the late 1920s, Ma Rainey (Viola Davis) was an imposing figure with both her voice and physicality. Nicknamed the Mother of the Blues, “Ma Rainey’s Black Bottom” takes place in the no-holds-barred era of early jazz and blues music during a fictional recording session in 1927 with her three backing musicians, including trumpeter Levee (Chadwick Boseman). Ma Rainey’s larger than life personality certainly reaches diva status, but in the era of Jim Crow it makes her an unbelievable character on and off the stage. 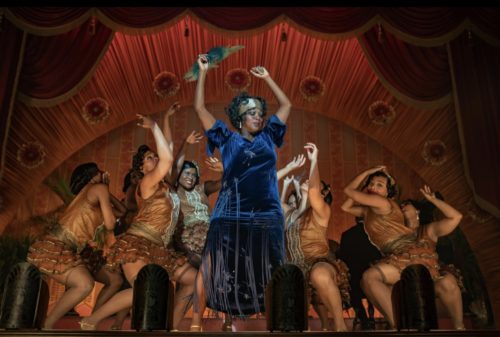 “Ma Rainey’s Black Bottom” is the second theatrical adaptation of an August Wilson play after Denzel Washington’s “Fences.” Director George C. Wolfe wrangles some unbelievable performances, much like Denzel Washington did with a very well-cast movie in the principal roles. Having Washington produce the film doesn’t hurt either, but it’s Viola Davis who makes this movie worth watching.

Academy Award winner Viola Davis delivers an exceptionally entertaining, over the top towering performance. Decked out with oily makeup (almost cartoonish and campy), heavy padding and overdone theatrics, Davis’ overpowering presence commands the scene much like a popstar entering a stage. It’s one of the rare times a leading lady is a scene-stealer and is more memorable with each subsequent appearance. However, the main reason why everyone wants to watch is because of her co-star, Chadwick Boseman, who makes his final film performance. 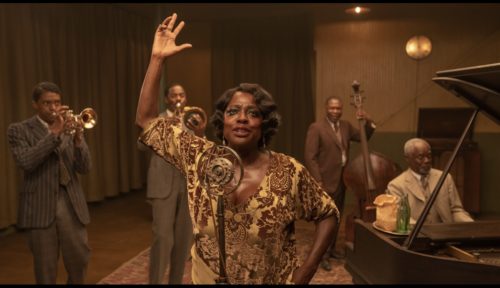 Boseman succumbing to colon cancer at the age of 43 is truly tragic. In the past few years, he’s left an undeniable, unique impact on pop culture, especially as Black Panther. However, in terms of profound performances he only now was finally hitting his stride with “Da 5 Bloods” and lastly “Ma Rainey’s Black Bottom.” Before that he was just “Mr. Biopic” playing too many icons and historical figures in such succession with Floyd Little (“The Express: The Ernie Davis Story”), Jackie Robinson (“42”), James Brown (“Get on Up”) and Thurgood Marshall (“Marshall”), the latter three during a five year span, that he never really stood out with a truly transformative character where he really inhibited the role. Boseman’s trumpeter triumphs and has his moments, but is completely overshadowed by an untimely and premature death. The role feels like an Oscar bait move that somehow is a combination of Jamie Foxx’s Nathaniel Ayers (“The Soloist”) meets Will Smith (“Seven Pounds”) and Don Cheadle (“Miles Ahead”).

Boseman’s final film performance is good, but not great. Now there have certainly been plenty of premature discussions about awards consideration for Boseman, but all of that attention shouldn’t be focused on a sympathy nomination. It seems like James Dean 2.0 of an actor being cut down in his prime and elevated prematurely to another pedestal. Unlike Heath Ledger and Peter Finch, who were critically acclaimed actors prior to their deaths, Boseman was just Black Panther and a Biopic actor. Not that there is anything wrong with that. However, overcompensating now shouldn’t satisfy fans. It’s an egregious sendoff that would come off as a pretty pandering move to win. 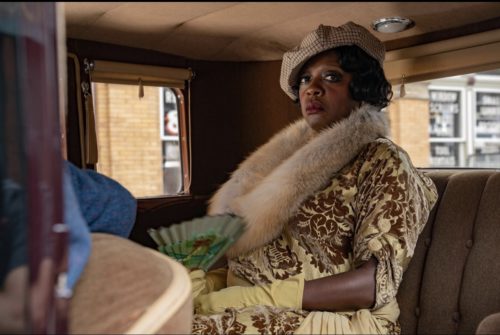 “Ma Rainey’s Black Bottom” is a good film with two powerful performances, but is the definition of an awards bait movie anchored by one or two solid performances for an otherwise average movie. Wolfe wrestles with a tense, traumatic timeframe during the Jim Crowe era and for about 90 minutes maintains your interest, but is not memorable on its own without reminding viewers its Chadwick Boseman’s last movie. Compared to “Fences,” this certainly feels like a staged play too frequently and does a disservice to the August Wilson play. Unless you want to see Viola Davis, in what should inevitably earn her next Oscar nomination, and/or Chadwick Boseman, hit the skip button. It’s a bumbling blues biopic at best.

In theaters and streaming on Netflix starting December 18th.