As most of you know I love me some Mad Men. I think it’s one of the best written, best acted, most intriguing television series of all time. It’s a classic piece of entertainment that is in a word phenomenal.

Being a member of some of the acting unions and such, I was fortunate to be able to attend a rare q and a given by the cast of Mad Men. It was supposed to be almost the entire cast but Jon Hamm, Elizabeth Moss, and Jared Harris were not able to attend at the last minute. Doh… Ah well…

Armed with some Mad Men magazines and one fancy 7” record I headed off to the event.

We were able to see the season 5 finale even though we were told that Matthew Wiener did not want to show it because of spoilers.

The Q and A featured Matthew and cast members Christina Hendricks, January Jones, John Slattery, Vincent Kartheiser, Jessica Pare, and Kiernan Shipka. The moderator is ABC News contributor Chris Connelly and it appears he’s going to do a great job.

You know, I was talking to a good friend of mine who regularily moderates events like this, and like I told him a moderator is in a lose lose situation. If the panel sucks, it’s his fault, if the panel is great the cast gets all the credit.

The Q and A really was about the different characters and what they went through this season. I tried not to listen actually as I haven’t seen season 5. The reason is, I like to watch the show all at once on DVD. It’s so nuanced, and intricate I find I pick up things better this way. And if you all start to hate, Mad Men Star Mark Moses agreed with me. lol…

The cast pretty much gushed about the creators, and the writing.

One question asked was about death of a major character in the show. And Matthew said he felt he needed to show the character’s body because in real life that’s what you would see. I paraphrased that so don’t quote me.

After the panel the entire cast took part in a reception afterwards.

I was not able to meet January Jones or Vincent Kartheiser because they took off fairly quickly. I think Vincent had to catch a plane.

The main person I wanted to meet was the newest cast member Ms. Jessica Pare. I loved her in season 4 and especially towards the end of the season.

I had the special edition red vinyl of Bisou Bisou… It’s a 7” single that I think was released during record store day but honestly I’m not certain. 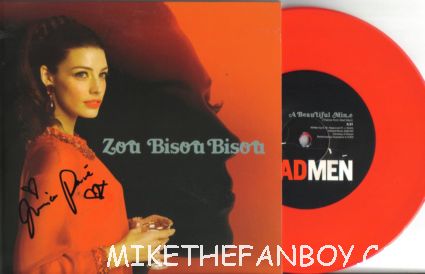 Jessica was nice, I wouldn’t say overly nice but very cordial. I’ve heard some reports that she wasn’t very cool but especially at events like this the stars really go out of their way to be nice to the people in attendance. 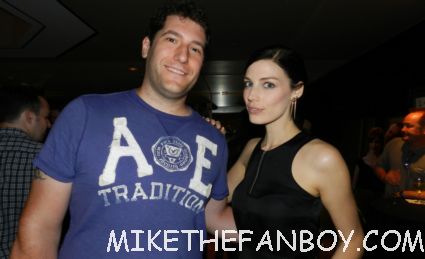 After meeting Jessica I waited to meet Ms. Christina Hendricks. Christina is always so freaking nice. I’ve met her a few times now and each time she has been really sweet. I talked to Christina for a second about Joan’s choices this season…

I told Christina that I actually liked Joan’s choice this season, if you haven’t seen the finale episodes I’m not going to spoil it, but when I heard about it I thought it was awesome. We discussed how the series always takes chances etc… I don’t think I drooled on her but it’s quite possible… lol… Christina’s friend was really impressed with my TV Guide magazine cover. LOL… Christina was happy to sign it along with my Newsweek cover as well. 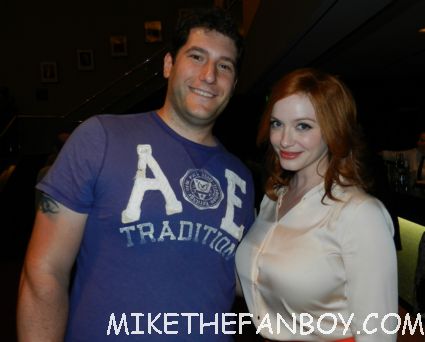 Finally, I wanted to meet John Slattery. Now, I met John with Pinky and Co. last year at the beach. John has always been nice and today was no different. He was happy to discuss the show with me for a second, and then signed the Newsweek magazine and the TV Guide. 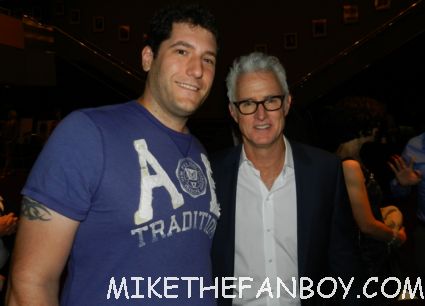 John Slattery went “Whoa! Who’s that guy!” when I showed him my GQ magazine. LOL… 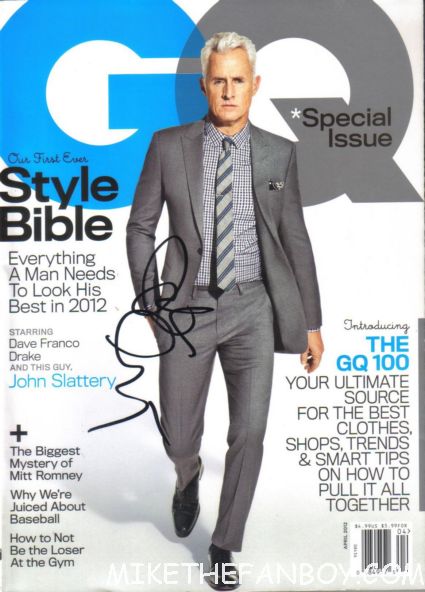 Overall, it was a very fun day. Billy Beer also was able to get a photo with Christina Hendricks as well and he got a couple things signed.

Gosh, it was such a fun evening and I’m always so floored how nice the cast is.

Also, we got a super cool present! A Mad Men promo can of olives! 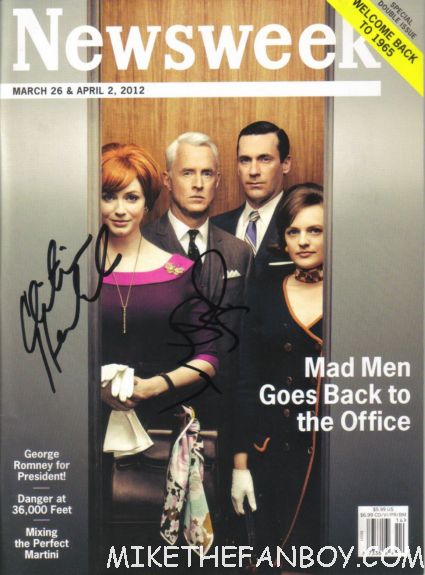 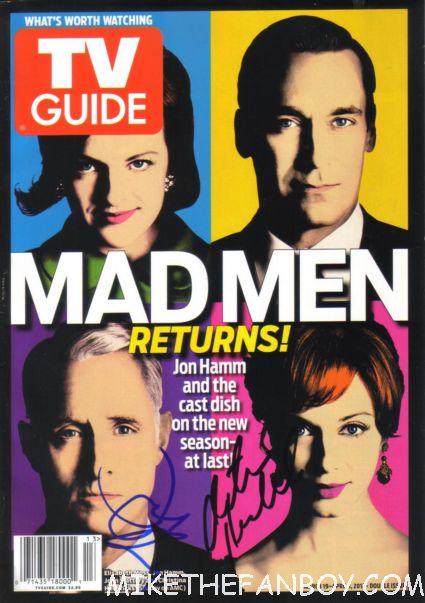