Billy Beer put down the bottle and headed out for a quick night in Hollywood! What? Madness you say?!? That’s what I said. Billy wanted to meet and greet, Crazy Heart star Maggie Gyllenhaal as well as Breaking Bad star Dean Norris.

He was fairly successful, but there was a dreaded green sharpie being thrown into the mix. A green sharpee! AHAHAHAHAHAHAHAAHAHHA Doh!

Welcome back to Billy Beer’s Bar Stool! Man it’s hot outside in
Hollywood!! So if I were you, I would go to a bar, order a nice tall
beer, and entertain yourself by reading Mike the Fanboy articles. Here
let me help…….

So today I’m off to get some unsigned items signed. First, I have a
cast piece for Breaking Bad that I still need to get Dean Norris on
(and a few others). Second I have an 8 x 10 of Maggie Gyllenhaal I
didn’t get signed the one time I saw her and there was only 2 of us
and she only signed one each. So all it’s really costing me today is a
little of my time. Why not? I’d probably be at home watching TV
otherwise. (enter Mike’s comment “you mean at the bar”……and he’s
probably right)

(Editor’s Note: Oh, now you know my comments… You don’t know me! Harrumph! I would have said… Drunk at the bar! Yesh! M-)

I don’t bother getting there early today. I don’t think there’s going
to be that big of a crowd. As it gets closer to the time people might
start arriving, there’s about 15 of us and a few photags. It must be a
slow day in Hollywood. Dean is the first one to arrive. He’s walks to
the door, then turns around after he assured there’s time to sign. He
come over and is being super cool. 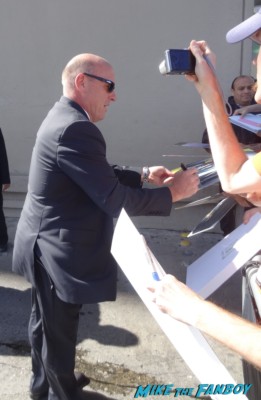 He signs for everyone and takes
pictures too. I get my poster signed, and get my pic too. My hair is
going a crazy in this winold. Is that even a word? 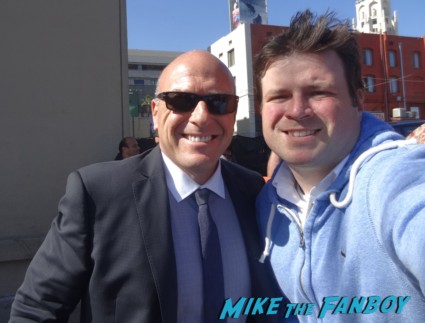 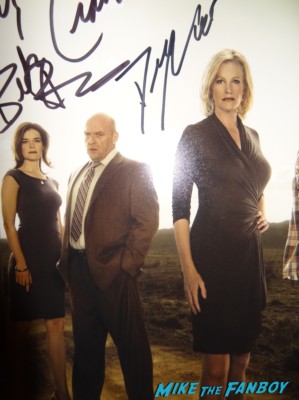 Here’s Maggie! Oh, we get the wave. Crap! There goes any chance of an
early night.  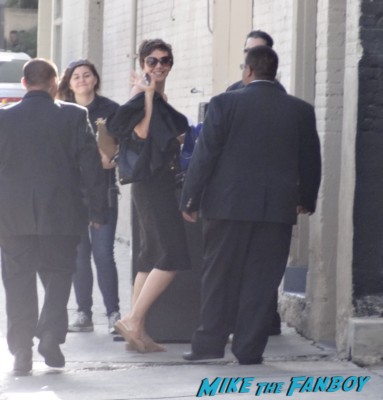 Well here comes Maggie. She looks like she’s going straight for the
door, but then makes a quick turn towards us.   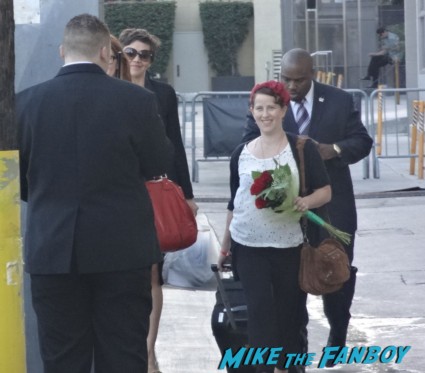 YAY! Again there’s not too many of us, but when asked if we could get
a picture, she sorry but she’s only signing. 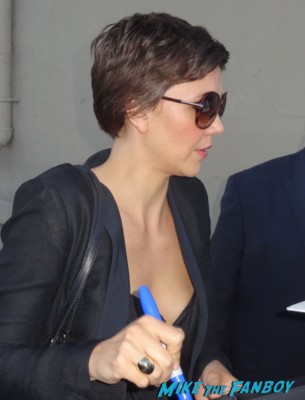 I ask her to sign my
picture in gold, and it came out alright.
  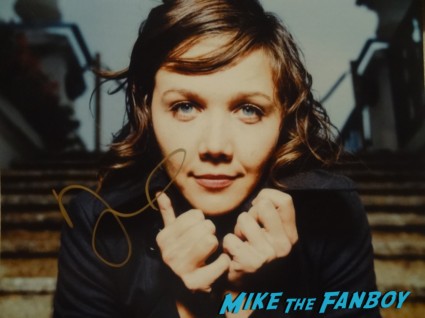 Then someone gave her a green pen…..
  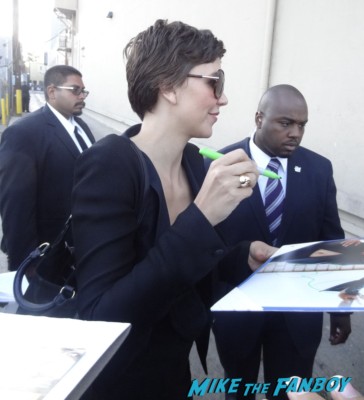 NEVER GIVE A GREEN PEN!!!! Unless your getting a picture of Mr. Green
signed…. see former Mike article.

(Editor’s Note: A green paint for Mr. Green is priceless! 🙂 A Green Pen for anyone else is disaster! M-)

After killing a few pictures, she  switches to blue.   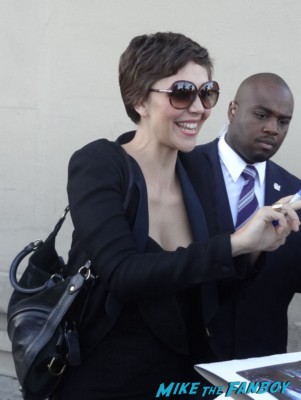 Anyway, it was a quick stop, but I got both my things done today.
Now what should I do……Off to the bar, it’s Happy Hour somewhere!