God bless Pinky… She always gets her man! And when she gets together with Lindsay from I am Not A Stalker… Well… All hell can break loose let me tell you!!

Pinky loves her some Saturday Night Live, David Spade… Cough… Cough… So when she heard that funnyman Dennis Miller was going to be taping a talk show nothing was going to stand in her way… Cars… No! Traffic… No! She was getting her man!

Check out Pinky’s truly Manic Monday after the jump!

Hello, my lovelies. Pinky Lovejoy here still on a high from taking a chance to try and go out and meet the one and only Dennis Miller. I’ve been a fan since he did the “fake news” back on SNL with the perfect delivery of sarcasm, wit, and dry humor. Dennis is a comedy giant and I’ve always hoped to meet him. Truth be told, I had a bit of a crush on him back in the day, but I wasn’t sure if he was really snarky in person, or if it was all an act. I’ve watched his comedy routine, his rants, and I hoped someday our paths would cross. Last week my dream came true!

I found out Dennis would be making an appearance on a recent talk show. Not wanting to take any chances, I grabbed my main partner-in-crime, Lindsay from www.iamnotastalker.com, and we headed out to the show armed with a giant sign and began to wait. As we’re both kind of new to that talk show, we weren’t sure when he’d leave or what he’d be driving, if he was driving, or if he’d have a driver. 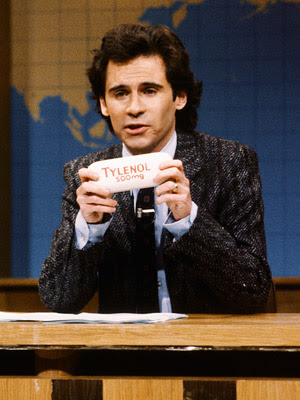 There were too many factors to account for and it was making us a nervous wreck. Then, just after I’d said to Lindsay, “We need to start watching every car, just in case it’s him,” we look up and there he was, driving by. 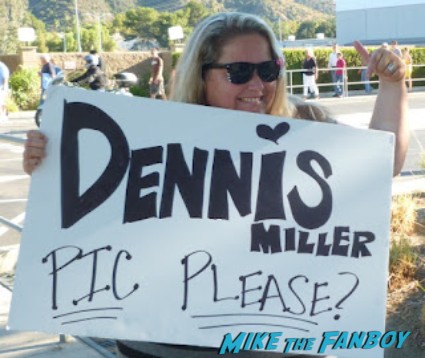 We held up the sign and asked for a picture and he not only agreed, but he got out of his car and posed with us. Got out of his car!!! Can you believe it? It’s hard enough to get an autograph or a car window picture at that location, so for him to get out of his car was above and beyond. I was floored! He kindly signed autographs for the few other people waiting and took pictures with everyone – even two with me, since I didn’t like the way the first one came out. I still can’t believe it! Dennis Miller is the nicest guy ever! 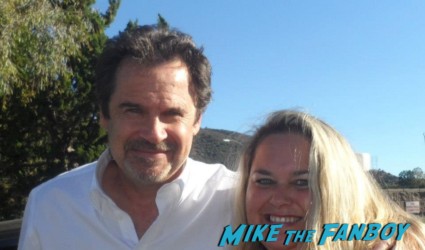 It just goes to show you that it never hurts to try, right? For additional pink fodder, please visit www.pinkylovejoy.com or follow me on Twitter @pinkylovejoy. As always, have a pink day! 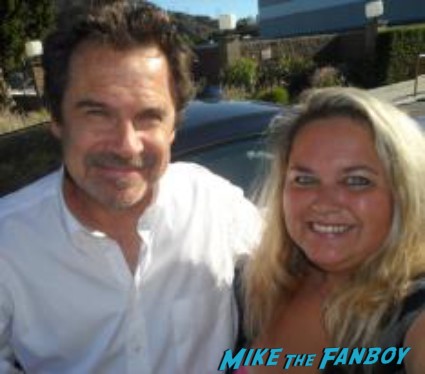