Home / Featured • Q and A / Margot Robbie Madness! The Legend Of Tarzan Q and A! “Meeting” The Suicide Squad Star! Autographs And More!

Margot Robbie is apparently the hottest thing ever…. Like… Handing out hundred dollar bills, hot.

I mean I’m looking forward to Suicide Squad too… But wow… Margot had a q and a for the new Tarzan film late last week, and I think everyone and their brother and their mother, and THEIR Mother showed up.

It was like Hollywood showed up to the q and a. Talk about not being a secret!

We were treated to a sneak preview of The Legend of Tarzan along with a q and a with Margot Robbie.

Now…. The film itself… It was rather boring. For someone who likes Alexander Skarsgard and Margot Robbie, this was just… flat. It was boring.

It’s not an origin story, we see Tarzan adapted to society and then he returns to the jungle, for reasons I still can’t figure out. It was all a trick because Christoph Waltz needed to turn Tarzan over to a tribe, so they can kill him and Christoph can get diamonds to pay for his army that’s broke, who will then kill said tribe and take the diamonds they want.

Along for the ride is Jane who gets kidnapped, and chained to a railing the whole film… Telling the generic bad guys that Tarzan will save them.

There are some parts that are just… Samuel L Jackson jumps off a cliff inexplicably because Tarzan does… FYI he would have died, and so would have anyone else. Tarzan gets into a fight with an ape, who ironically used to be his brother. Working out family issues is always fun in film.

You’ll be happy to know that the ape and Tarzan, team up to save Jane later on, whew… I would have hated to see them at Thanksgiving otherwise.

Poor Alexander Skarsgard is given nothing to work with, I mean the script doesn’t do him justice. He’s a good actor and he’s saddled with such boring and cliched dialogue. It made me want to watch reruns of True Blood.

After the film, the q and a started. 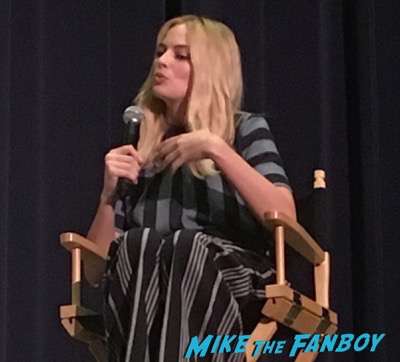 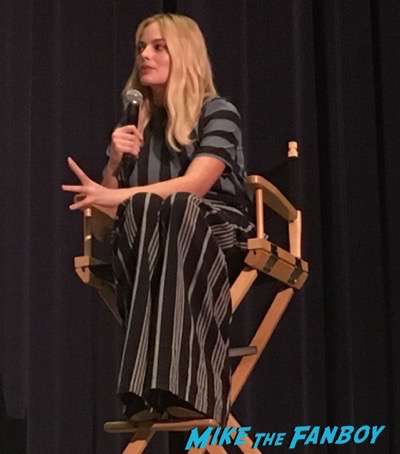 Margot Robbie was very sweet and chatted about the film, the CGI and more.

“I think they have ways to make things look so convincing.” Margot said, “The apes were not there when we filmed.”

She went on to say that the film was shot on several soundstages in London.

“The jungle we were running through, it was all built in a studio, there was a river running through the middle of it. Rain machines, the whole town, the village was all there. Mongo’s lair was all functional. I’ve never been on a set this involved before.” She exclaimed. 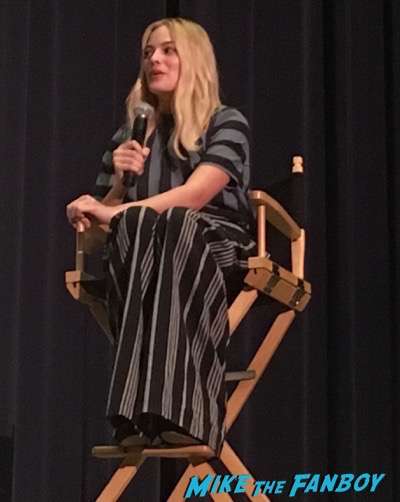 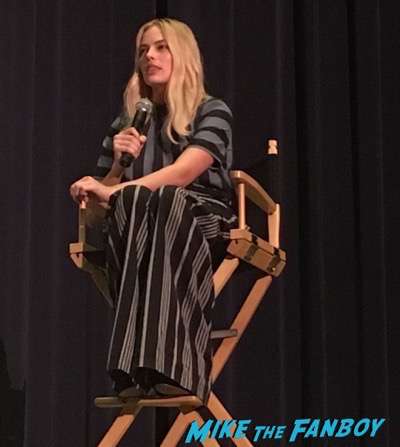 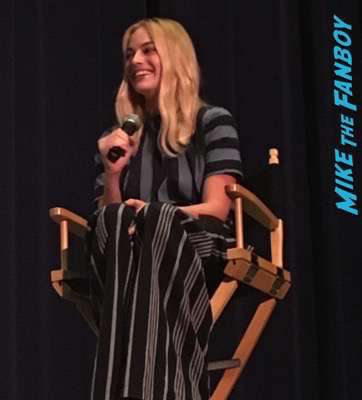 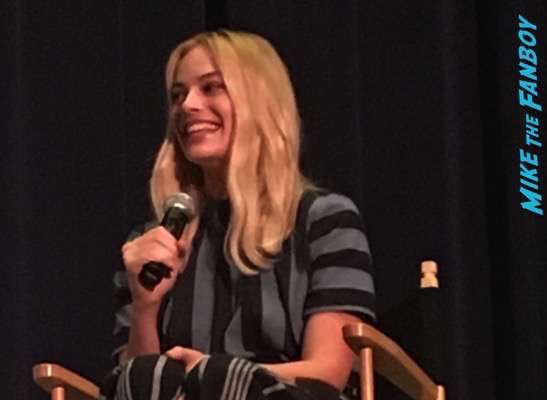 The actors never actually made it to Africa, actually. David Yates of Harry Potter fame directed the film.

“Her and John are very dependent on each other. I wanted her to be emotionally strong, while he was physically strong. so that the relationship could work.” Margot said while talking about her character, “I wanted her to be constantly fighting back even though she was held captive.” 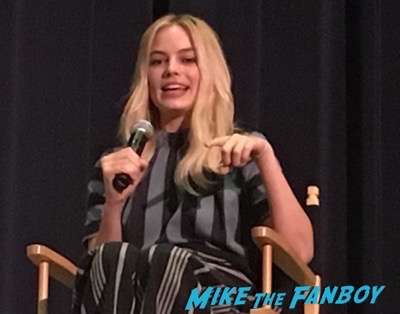 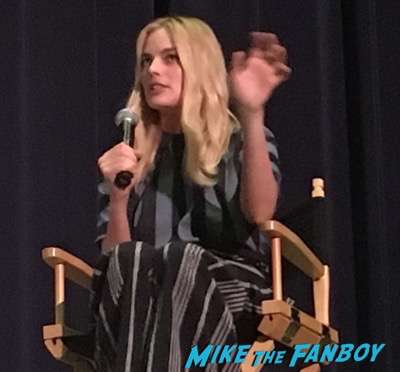 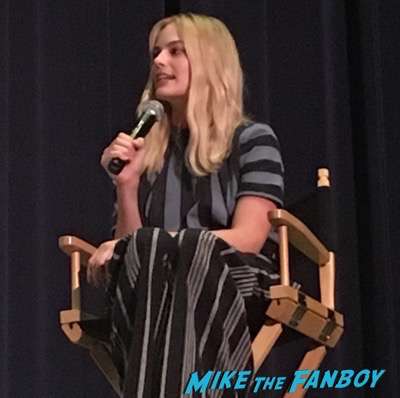 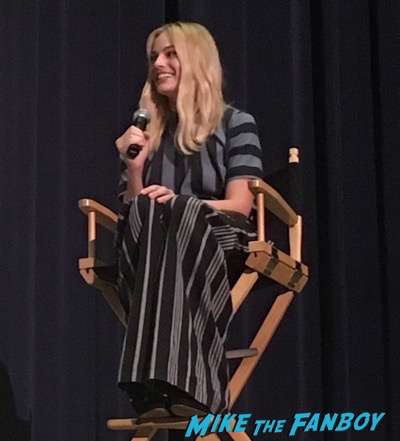 After the screening it was like a madhouse. I was sitting in the front row and ended up three people back from the stage. It was like a mosh pit I think Margot was taken aback by it, and so was the moderator.

Margot was nice enough to sign, I brought a few mini posters with me and a pop vinyl.

I was able to get two things signed inside during the madness. I think she must have signed maybe 30 things total. Billy was there and got one, but Scotty didn’t.

We decided to go outside and see what that looked like and it was even crazier.

I ended up getting a spot and talked to Ryan for a bit.

After a little while Margot came out and was nice enough to sign again. I got a really nice autograph on my Suicide Squad poster.

I’m glad she’s nice but man oh man I wasn’t thinking it would be this crazy! 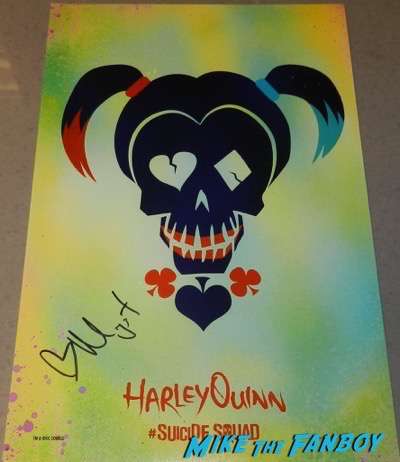 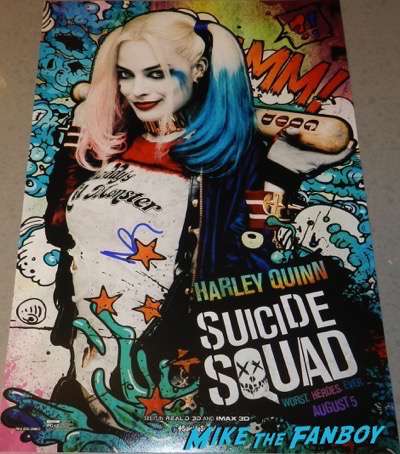 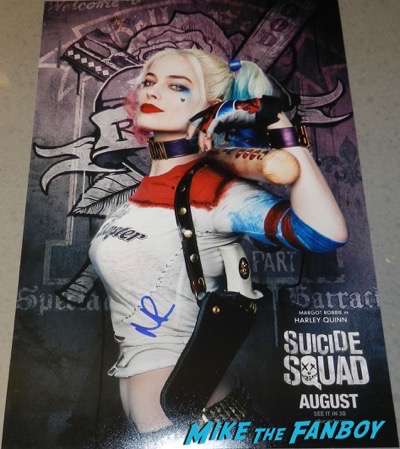