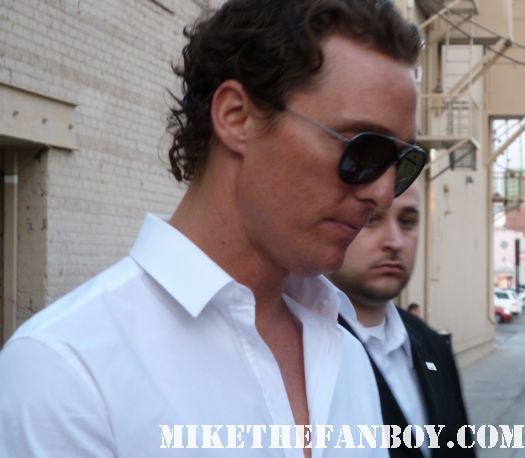 Check out their full story after the jump!

The pens are still vibrating as we speak!

It’s Scotty and Erica reporting straight from an amazing encounter with the upcoming stars of The Lincoln Lawyer and Sucker Punch. Today we sought out Jena Malone of Pride and Prejudice, Contact and Saved! and the gorgeous (per Erica) Matthew McConaughey of U-571, Dazed and Confused, How to Lose a Guy in 10 Days and, coincidently, Contact.

Yes, we both love Contact and Scotty can’t get over the amazing opening of this great film. (No matter what Mike thinks of this movie…) (Mike’s Note… I didn’t hate it, but I thought it could have been better. Harumph!)

Scotty arrives just before 4 PM and is greeted by another Mike the Fanboy contributor, CB. Thankfully CB has saved us places in line, even if he does demand payment in the form of bottled water.

We see movement and a limo arrives and drops off its precious contents right by the building. Never a good sign!

Jena Malone gets out and we all start yelling. She consults with some of her people and then begins to walk toward us. Yeah! 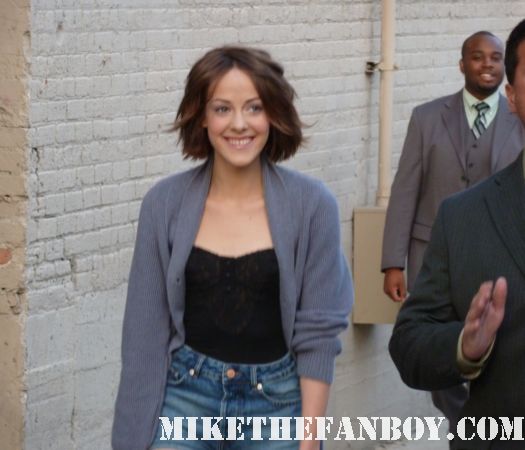 We race to prep our stuff and Scotty pulls out his Contact one sheet that he’s been saving forever. Erica pulls out a slightly more portable Contact laserdisc and we both have posters that Mike has requested (translation: begged) us to try to get signed for him. 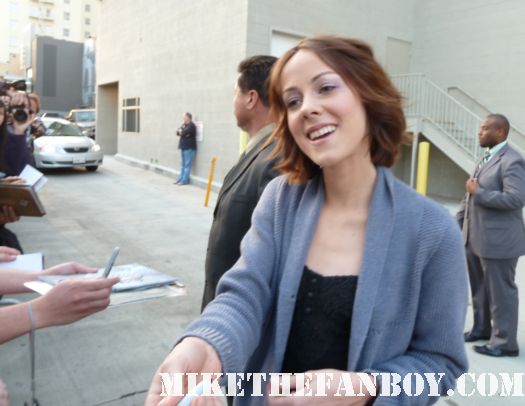 Jena Malone starts to sign and says she’ll do pictures in a bit. 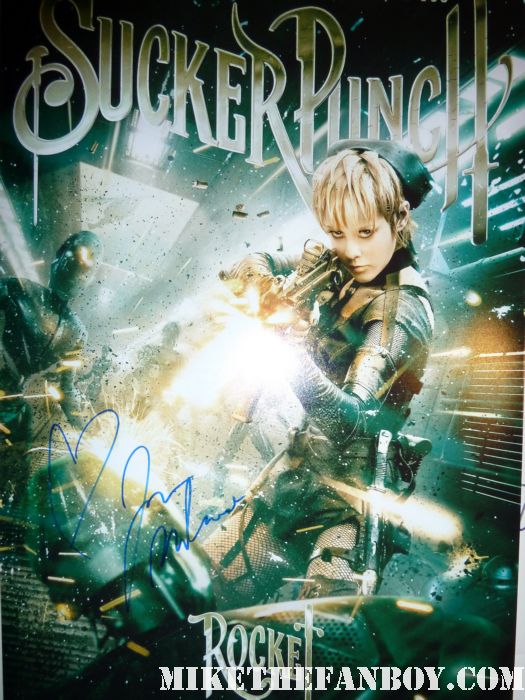 Jena Malone is really friendly and signs two per person (although CB sneaks in 3). We mention how we loved her in Pride and Prejudice and Jena Malone smiles and says she really liked that film. She was also delighted to see we have Contact for her as most people are getting Sucker Punch signed. 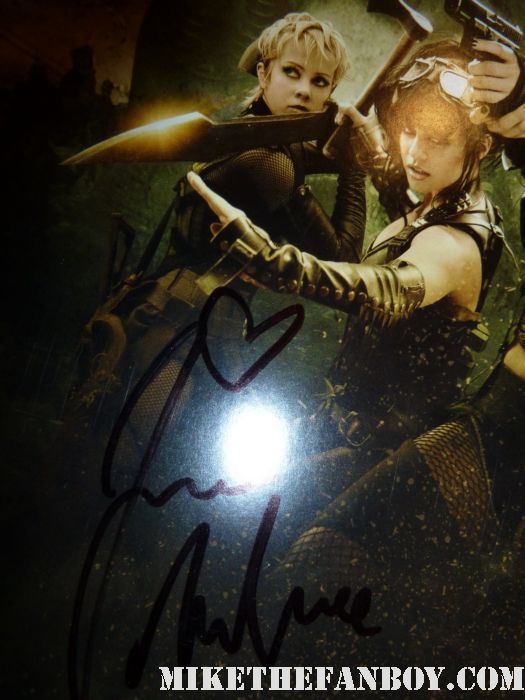 Jena Malone goes down and signs for everyone which is now around 60 people. She does a few photos, but we think the line was longer than she thought and she needed to head in. So Jena Malone literally sprints in heels since she is now running a little late. However, Jena Malone really did get to everyone which is fantastic! 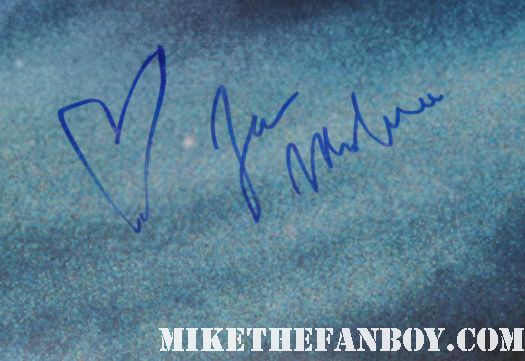 We settle in to wait and hope that Matthew McConaughey does likewise as it really is getting late.

Not too much later, Matthew McConaughey arrives and we start to yell for him. He takes a moment to talk to his people and then he begins to head over towards us. No way! He’s coming! 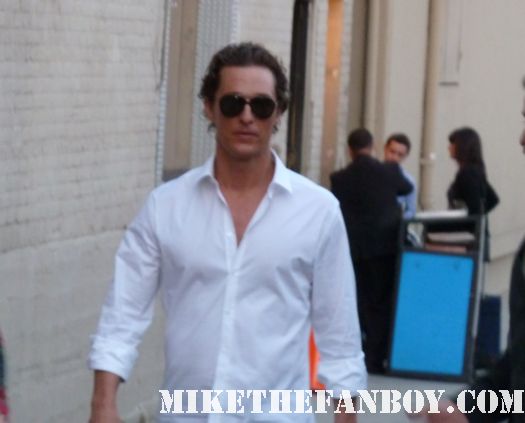 We scramble to grab our Contact stuff once again and have it ready. Scotty partially unrolls his one sheet to the spot right by his image in the poster. As Matthew McConaughey gets to Scotty, he begins to sign the large white spot which happens to be the back of the poster. 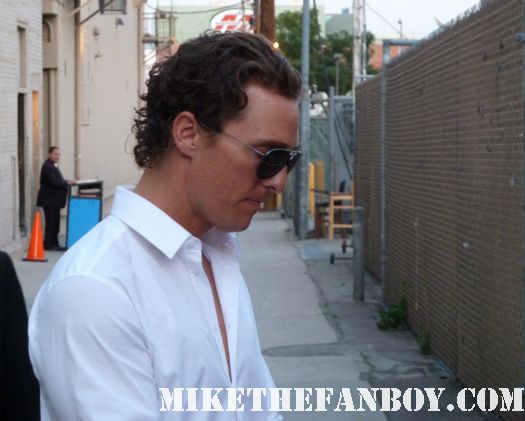 In a slight panic, Scotty goes “No, right here, buddy” and points towards the front of the poster. Unfazed, Matthew McConaughey signs and personalizes the poster to Scott. 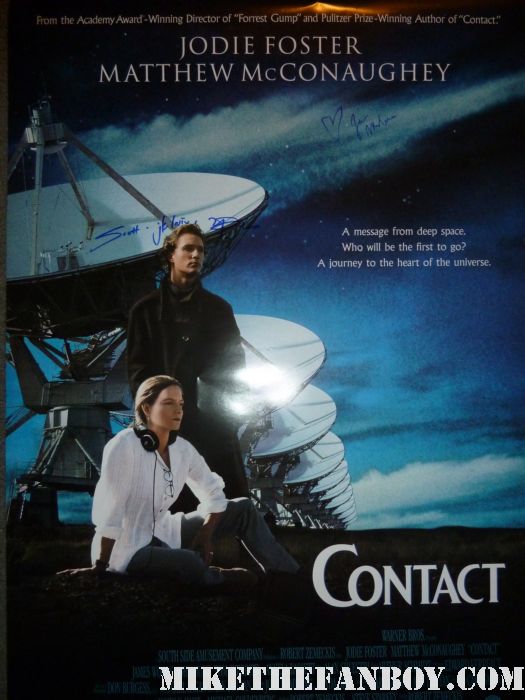 He also personalizes Erica’s laserdisc and all are inscribed with “JK livin'” followed by his distinctive John Hancock. 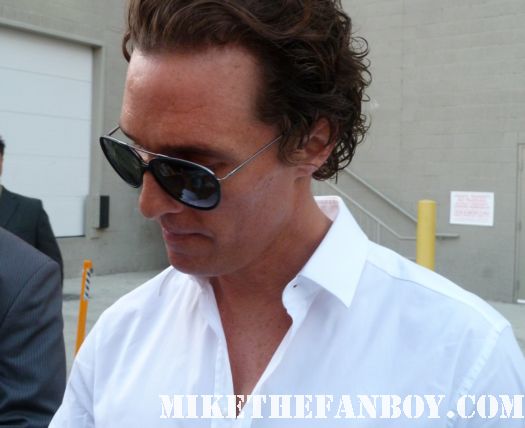 He’s really relaxed and goes down the whole line of now 75 people. 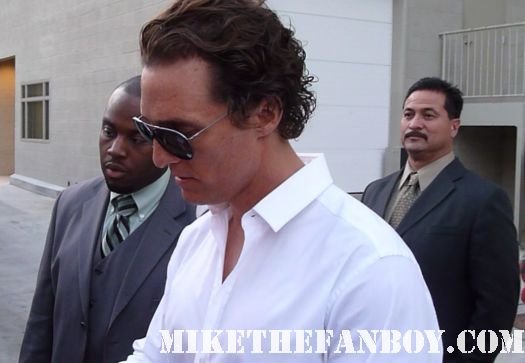 When he’s finished, Matthew McConaughey heads back in with a short salute to the crowd. 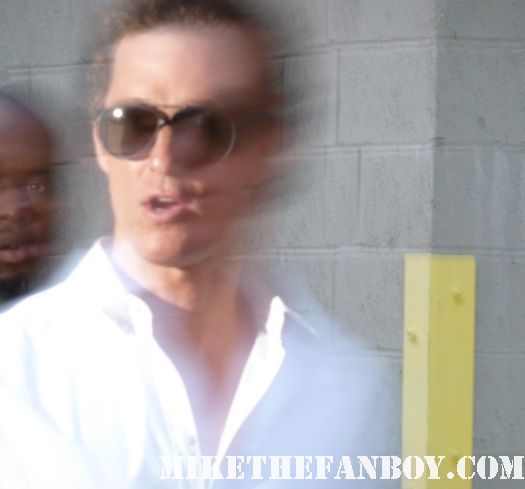 Yeah! We got them both and didn’t have to suffer for hours in the dark for once! Even though they both did the full line, it really only took about 5 to 7 minutes each. See,it really doesn’t take that much to make us happy! 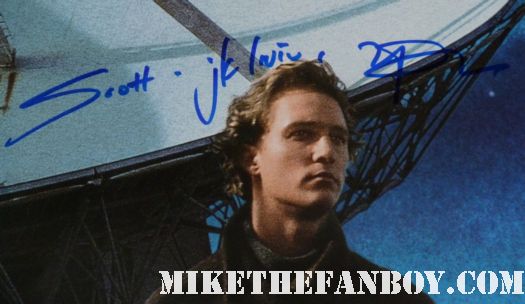 Go see The Lincoln Lawyer this weekend and Sucker Punch on March 25th!