Oh Billy, Now that Billy has moved a couple hours away, you would think that we wouldn’t see him very often. You’d be wrong. In fact, Billy is around all the time… One weekend Billy came into town and headed out for The Walking Dead star Andrew Lincoln.

Welcome back to Billy Beer’s bar stool. Today we are off to see the Zombie Killer himself Andrew Lincoln. He’s in town to promote the next season of Walking Dead, and was appearing on the show Talking Dead that night. I really only get to come into town on weekends now a days, so might as well try and maximize the time. I kinda found out about this last minute, so all I really have for the guy is 4 8×10 walking dead poster shots I printed In case I ran into any Walking Dead people at Comic Con last year. (And if you want to read a million articles on where Mike the Fanboy is staying this year and the process it took for him to get there, just look under recent articles.)

So as we’re getting ready to leave for Andrew, I’m then told, oh by the way, the Draft Day press junket is there also. GREAT! I have nothing for any of those people except one 11 x 14 of Jennifer Garner. Plus I hate press junkets. You sit and wait forever, and a lot of the time you never even see the people. I like to be dissed face to face. Oh, and since it’s not my information, I’m not allowed to tell people about the event which later upset Fanboy. By the way, how did you do at the Premiere? 5? At any point did you say, Billy like’s Jennifer Garner, I’ll ask him if he wants me to get him one. That’s what I thought. 
We get there, and then surprise! We wait, and wait, and wait, and wait. Finally Andrew is spotted, and let me tell you, there is a reason he is and will be on the Top Ten Signers list. He actually came running over to us. He signed all 4 items I had (wow, I sounded like Fanboy and Ace right there!), and after that he was nice enough to talk with us and take pictures. Well that was great! It’s what I came for and more, and now everything else is an added bonus. 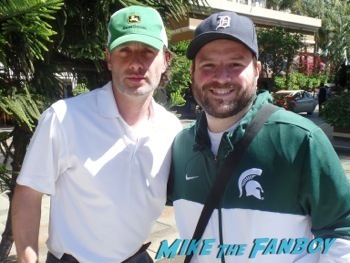 After more waiting, Kevin Costner is the first to leave. Dude barely looks at us and totally ignores us. NICE! What a D-bag! Next we see Jennifer. We call out to her and she waves and smiles. Well, that’s a good start. When her SUV pulls up, she rolls down. She couldn’t have been nicer. There were only 3 of us and she signed one or two for each of us, and then I ask for a picture which has evaded me for some time which she gladly did. Then she was off. 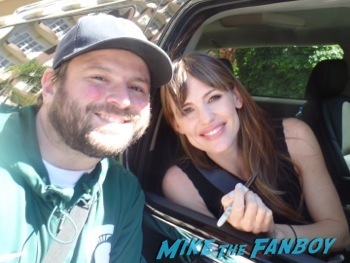 Then some guy comes out, WAIT! That’s frickin Costner. No wonder that other guy completely ignored us and acted like a D-bag. “Mr. Costner!” totally ignored. Then I witnessed the fastest exit of an SUV EVER! Driver burned rubber and then even ran a red light. I’m sorry I called the first guy a D-bag, cause the real Costner was a TOTAL D-BAG!

Now we are waiting for Superman Mr. Tom Welling. Of the cast, even though he’s been known to be difficult, little known fact, I went to school with him. I graduated with his sister. I wasn’t friends with him, but I thought I might get some Okemos High School love.

While we were waiting, there was an accident about 50 yards from us. Where was Superman??? I guess due to the lack of phone booths, Tom was unable to change into Superman. But he did finally make his way out, and even walked over that way to see what happened. I call out to him and tell him we went to the same school and I graduated with his sister. I got a wave and a smile. REALLY? Looking back, maybe he gets that a bunch and doesn’t know what to believe, but I was still disappointed. He too drove by, but didn’t make any speeding records.

Terry Crews is the last cast member to leave. He is cool and signed a few. I absolutely love Brooklyn 99, so I was happy to see him.

Finally Andrew comes out again. I had already gotten him, so I just watched while the now 8-10 people got him to sign stuff. Again, this guy is the shit!
Anyway time to go. I got a long drive back home.