Some events, even when they turn out well can still be a disappointment of some sorts. not really because of the celebrity you’re a fan of but because events can become chaotic.

When none other than Sir Anthony Hopkins appeared on a local talk show… It was… Well… I’ll let Jack tell you the story on todays Cult Classic Corner!

My loyal readers typically know I usually pick out an actor, actress or director I recently met for the Cult Classic Corner. This week’s edition happened literally a week ago and instead of doing a whole razzle dazzle write-up I will give you the low down. Thanks to Karalee we have these wonderful photos below. Considering how interesting this event went down and how lazy I feel it will have to do….take that back, frustrated might be more accurate.

Considering it was Comic Con, Hollywood was pretty quiet outside of Bryan Cranston’s Walk of Fame ceremony. As luck would have it, an A-List Academy Award winner would be appearing for a talk show taping and I decided it would be foolish to pass it up. Obviously as the title implies, it was Sir. Anthony Hopkins. Fortunately for me a few members of the MTF Family were there, Scotty and Karalee, along with a handful of cool people. It looked pretty good…at first. 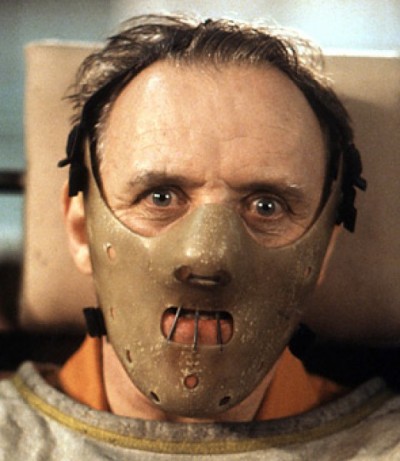 I arrived early, way too early that I’m almost embarrassed to say the actual time and was there for 30 minutes before anyone else came by. Luckily CB swings by and we pick out a spot. Eventually a few collectors, come by and Scotty shows up. There are only about five of us there. Scotty decides to make a sign, which looks pretty awesome (and the best by far when others joined us). Over time, a few more cool people like Karalee show up and there’s a nice group of less than 10 people. 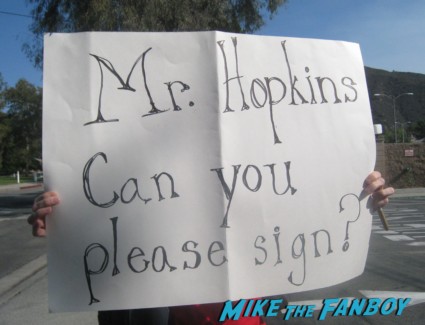 Eventually we see an SUV pull up and it’s Mr. Hopkins, whose vehicle is driving super slow. It’s as though the driver is trying to help us out, however Hopkins is on his phone and ignores us. Over the next hour or so, we all go our separate ways and I hung out with another collector to pass the time by going to grab some food. When we came back, there are now a few more new faces and we’re at 15 or so people. The audience starts getting let out and we’re all getting ready.

Suddenly, we see Anthony’s car and get ready lining up single file near the audience. Audience members stand and watch as Hopkins’ car pulls up. As soon as he rolls down, two dealers block the window putting all their stuff down and refuse to move. 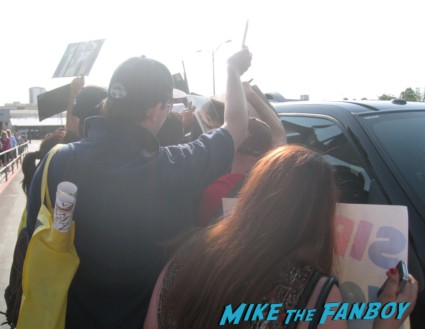 Now all of a sudden, everyone’s trying to jam stuff into the window. There’s no rhyme or reason with people refusing to move after they get their stuff signed. Anthony is being polite accommodating all the things near and on top of each other. Still, he’s trying to look at who he has signed for, but some people are being greedy. 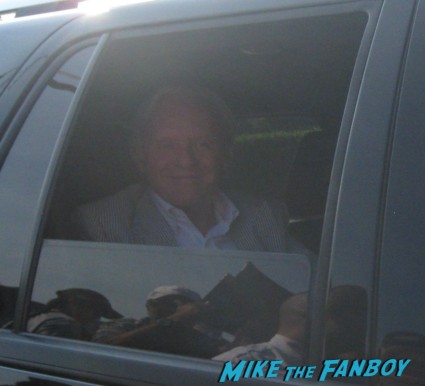 CB gets one. Scotty somehow stretches to get one and helps Karalee get one while he has an opening. Despite my long arms I’m completely getting stiffed and Hopkins rolls up his window. Luckily, he rolls back down to calm people and I ask politely could you please get me and personalize my laserdisc. At this point I decided to switch from Silence of The Lambs to The Remains of The Day, which helped my cause. He finally grabs mine and I’m one of the last graphs he signed. (In case anyone was wondering, he didn’t personalize, but it did grab his attention). 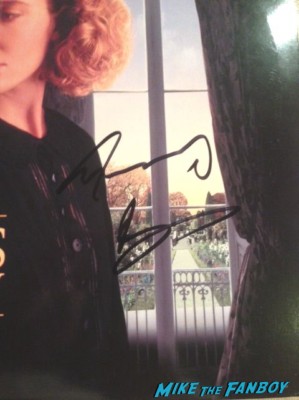 As we walk away, some people ask us, “What we’re selling the items for on eBay?” Both me and another collector respond, “We’re fans,” with me adding, “I’m just an autograph collector and greatly admire Sir. Hopkins. There’s no way I’m selling this and I only collect for myself.” Luckily we all got one, but this almost turned into a fanboy fail.

Let me reiterate this: On behalf of the MTF Family, we only collect celebrities’ autographs/pictures for ourselves and none of us are dealers. We’re not in this hobby for the money or to make “a quick buck.” We’re in this hobby to meet people we idolize and try to help out fellow fans when we can. Some people don’t understand why some celebs have become reluctant to “meet their fans,” it’s because of instances like these where calm situations turn chaotic for absolutely no reason. Just please be respectful and don’t be greedy. Until the next time, happy autograph hunting!