DVD Dave headed out for a rare q and a with Child’s Play star Brad Dourif! I was going to try and make it out there to catch this, but sadly… Well… I didn’t make it. Doh!

Thankfully DVD Dave was not only able to get down there but he managed to get a ticket for the film and q and a as well. Nice!

Check out DVD Dave’s full recap after the jump!

It was just one of those nights where everything seemed to go right.

Brad Dourif, the Academy Award nominated actor from One Flew Over the Cuckoo’s Nest and the voice of Chucky in the “Child’s Play” films, was scheduled to do a Q&A.

Dourif is a rare name in the graphing arena and I was sure my friends would be eager to try for him.

I was shocked when mine said they couldn’t make it.  Granted, it was a midnight screening. But REALLY Ace?  You couldn’t come out and play?  After your bedtime perhaps?

Regardless, I decided to go alone.  Not knowing who would show up.  I did my usual research on IMDB to see what I needed Brad on, pulled out the necessary DVD sleeves (you DO know I’m DVD Dave, right?), made sure I had some decent Sharpies and ventured forth to get me some Dourif on the DVDs.

Well no sooner do I park and get out of my car, that I see a fellow collector, my friend Devin.  Big time 80’s music grapher, but loves his horror too!

It is already close to 11 when we walk up to the theatre and there’s no line!  Front of the line…nice!

I don’t have a ticket, but I seem to find out that there still about 90 tickets left available. Seems like I’ll have a chance to get him inside as well!

So Devin and I hang out talking about last night’s awesome Q&A screening of “Night of the Demons”.  He went.  I didn’t.  (Grrr…)  We also talked about how the last time we saw Brad at an event was at the last Los Angeles Fangoria Weekend of Horrors which was four years ago this April!  Chances looked good!

Then, the collectors arrived.  Then more.  Even more.  Our expectations dropped.  A feeding frenzy was sure to ensue outside upon Dourif’s arrival.  Plus, with so many tickets still available, it was a no brainer that they would try to rack him inside as well.

Normally, graphers make it a point to not spend any money (or as little money as possible) when getting graphs.  They’d rather wait outside and pounce on the unsuspecting celebrity after the event.

But again, this celebrity was too rare to take any chances.

A pretty long line had grown in all this time.  Even Joseph Bishara (composer of the “Insidious” and “Conjuring” scores and Lipstick Demon in the first “insidious”) showed up to hear Brad talk.

All of a sudden, one of the collectors whispered out to the rest, “Brad!”
Like koi flopping about for food in the pond, the calm atmosphere suddenly erupted in a flurry of activity as graphers rushed to grab their pieces.

Brad was very accommodating.  Switching pens and signing quite a bit despite saying “Only one each”.  He tried to carry on a conversation on the cell phone while he signed, but that was a bad idea. He almost dropped the phone while signing. Luckily he caught it.  Eventually, Brad put down the pen and made his way inside.   No one could complain that Brad stiffed them. 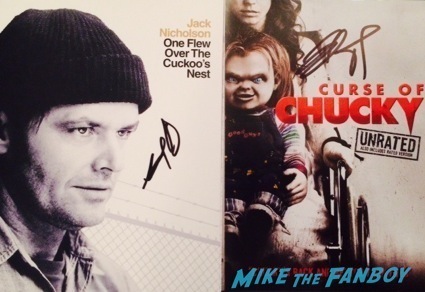 I myself was able to get two in all the commotion.

After Hurricane Brad subsided, I told Devin I was surprised Clu Gulager wasn’t here.  Devin looks inside theatre lobby and remarks “He’s inside and he’s talking to Brad.”

Sure enough, ol’ Clu is there and Brad is grabbing a popcorn and soda.  Does this mean he’s staying for the entire film?  I do NOT wanna stay here till 2AM!

Moments later, Brad disappears and the doors open.  Management tries to tell the collectors to get to the end since they weren’t standing in line.  Collectors sometimes have selective hearing I might add.

Inside, Devin and I got our front row seats and waited.    Clu was there too.  Front row center as usual.  He’s such a great guy to hang out with and shoot the sh*t.

After some bad DVD giveaways, Brad was introduced. 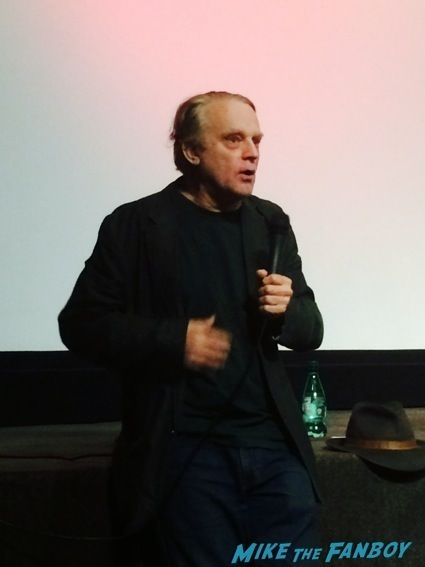 He is fun to listen to.  He spoke about the fun he had yelling at George C. Scott in a scene.      I was able to ask the last question of the Q&A.  I told him I loved the latest “Child’s Play” film and that I thought his daughter did an excellent job in the film.  He loved that. 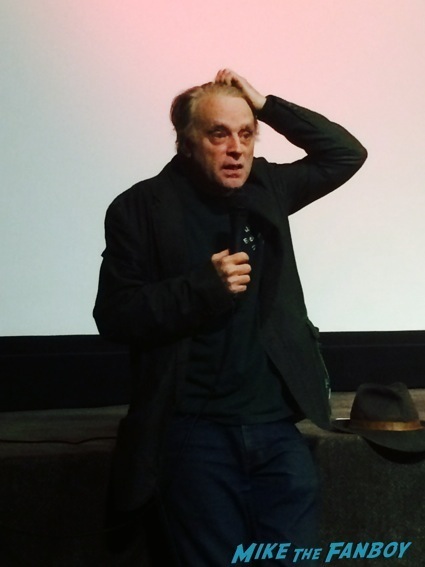 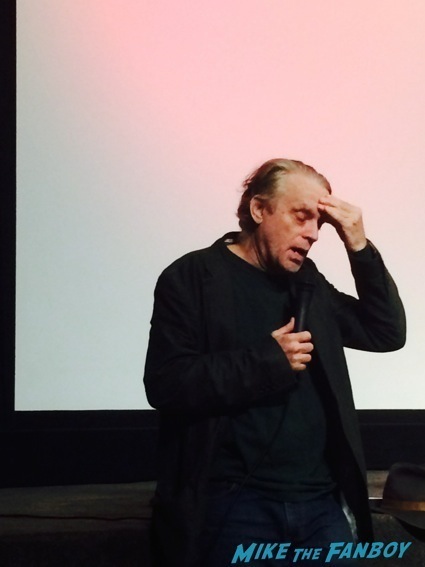 He smiled as he spoke of how proud he is of her.  He also stated there’s interest in doing another Chucky film but, as usual, it all depends on getting funding. 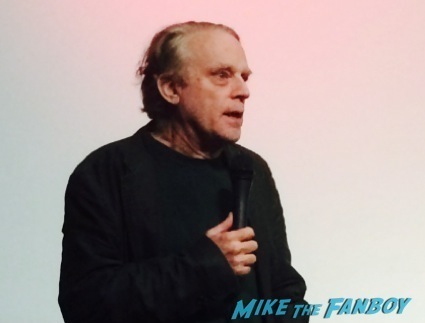 With that, the Q&A wrapped and Devin and I were in perfect location to approach him.  He signed for us first before the other collectors swarmed.

Again, Brad racked.  I was able to get a few more.  Brad made his way to the lobby and insisted he had to go.  As he ran down the street, the collectors followed.  The theatre staff yelled at them threatening to lock them out of the film.  As if that mattered to them.  I still needed Brad on two sleeves, but I did not join in the chase.  I was happy that Brad had been as generous as he was to us.

So until next time, remember…it’s better to be over prepared than under! 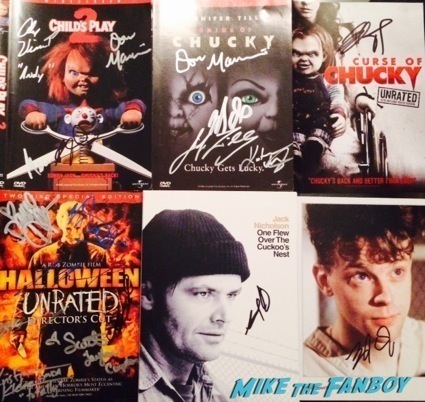