Charlie Sheen was on Extra and Chris headed down to meet him. Personally, I love Charlie in Ferris Bueller, his cameo was hilarious. But I’ve also like a lot of his films. Major League and Hot Shots are both awesome!

Chris put up with delays, drinking but finally met the 1980’s icon!

It’s Tuesday and Charlie Sheen is on Extra.

The last two times he cancelled because he was sick but, they say he’s confirmed and feeling good. I’m pretty stoked to meet Charlie Sheen because as a kid I idolized his brother Emilio Estevez and liked a lot of Charlie’s films too.

Some of my favorites were “Men at Work” I know… cheesy but very entertaining when you’re 12 years old lol. I also, liked Lucas, Wallstreet, Major League “Ray Vaughn’ and Red Dawn and Eight men out and you can’t forget Hot Shots.

As, I’m heading to Extra I hit the worst traffic ever I start to worry that I’m going to miss him but I hear he’s going to be late too. So, I get there around 10:30am and find out Charlie’s still running late. Now, it’s 10:30am. The producers of extra are getting worried. Now, it’s 11:15am and Charlie’s finally here.

Mario doesn’t look happy and Charlie gets out and talks to him and then Charlie heads to the saddle ranch for a beer. Then comes back around noon. It looks like Charlie’s really to go finally. Until he gets on the stage and complains his shirt is too tight so they rush him off the stage so he can change shirts. 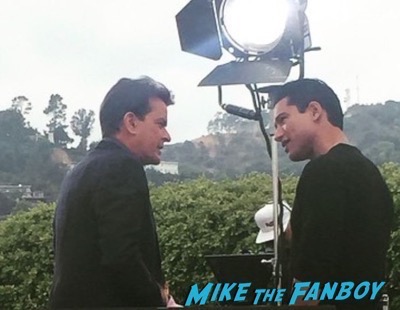 It takes him another 30mins. People start to leave and the producers start to look frustrated.

Now, it’s 1pm and Charlie finally is on the stage giving a great interview with one of the girls. He looks happy and enjoying himself but I kind of felt bad for him because his speech was really bad and he stuttered so much. It’s 1:30pm and Charlie’s finally done. He walks off stage and tells us he will sign later. He needs to go into his car and relax.

It took him another 30 to 45 mins to just get out of his car but he stood by his word and comes over and signed and took photos with everyone. 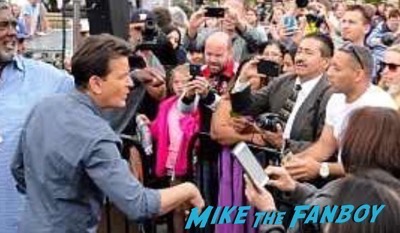 Very nice guy!! I’ve always liked him but I’m a little worried he’s not going to be around for much longer because he just looked bad..

P.S. Charlie was drinking beer in his car because he smelled like booozzz bad 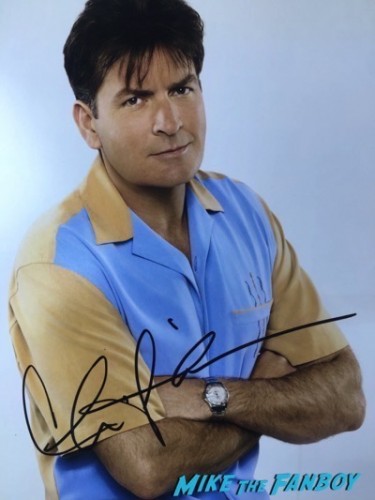