With all the talk of the Vacation reboot happening, I’ve been obsessed even more so with Chevy Chase. I love the dude, I have to tell ya. I know, I know. He has a history but with the Vacation saga, Funny Farm, Spies Like Us, The Three Amigos, etc… He’s been in so many movies I love.

Plus, my mom and dad used to let me watch his movies when I was only four apples high.

Chevy was out promoting his stint on Community and I was able to meet him… Once upon a time. lol. I wish I could have a day like this again!

Sadly, Olivia Newton John was not that cool. Ah well…

Now, as any reader of mine will know… I love the 80’s… I could be on that CH-1 special they shot in 1990 and keep playing every other day, talking about how much I love the 1980’s! With that said, I’m heading out today to try and get a couple 1980’s icons… One being one of my top people Mr. Chevy Chase. The other Ms. Olivia Newton John… I’ve lover her in Grease, Xanadu, etc… I have this super rare Grease promo for Olivia Newton John and I have a few mini posters for Mr. Chevy Chase.

1:43 p.m. – I just got here… Traffic sucks. This is a strange place to do some celebrity spotting, but it’s a mall in LA called the Grove. They are taping like Access Hollywood or Extra, or E or one of those random shows… anyway; Olivia Newton John should be here at any time… So, cross your fingers for me. I love Grease, like most people do… 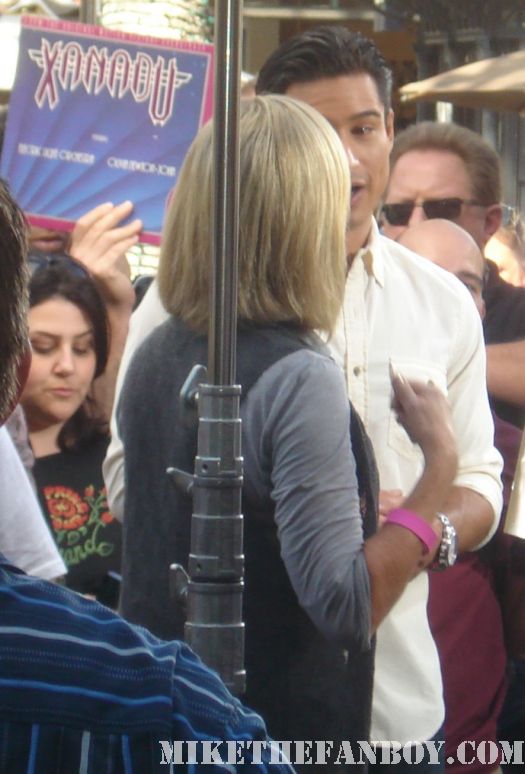 2:03 p.m. – hmmmm it looks like Olivia Newton John is almost done with her interview… her new cd is called Grace and Gratitude Renewed and it’s available on amazon.com. 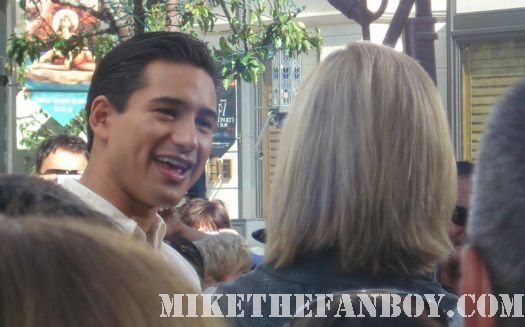 2:10 p.m. – Okay, she’s done… and a few people ask her to sign. She stops and signs a couple albums for people right next to her, and then we try to call her over but she won’t come near us! Dammit.

2:14 p.m. – Security are treating Olivia Newton John like she is Angelina Jolie. My God, let’s be a tad serious here for a second. No one is killing themselves for Olivia Newton John. I mean I love her, but she’s not the pope for God sakes. Sigh…

2:18 p.m. – Wow, Olivia Newton John just told me no. I’m a little bummed. I mean she wasn’t mean… but she wasn’t nice and refusing to sign for only a few people is kind of… I dunno… divaesque. Perhaps it was the security, I mean they were militant. They made it so hard to get anything signed, I can give her the benefit of the doubt, cause I will try for her again… but still come on Olivia Newton John! Grrrrrr….

2:26 p.m. – So, I have to get in good position for Chevy Chase…. Now I love the Vacation movies, I love Funny Farm, I love Fletch… I love this guy, and I know he’s well…. He’s not super friendly. I’ve met him a couple times before, and he would sign, not do pictures etc… but still he did sign and I can’t fault him for that, so hopefully today will be a good day on that front!

2:29 p.m. – Pinky just arrived… She asked about Olivia Newton John and is bummed she missed her, but I told her… “Honey, you didn’t miss a thing.” Lol… Anyway, here’s to better luck with Mr. Chase…

2:31 p.m. – Oh we spot Chevy Chase walking in. It looks like he’s going to get coffee at Nordstrom’s… So… We head in. Pinky is going to ask for a photo so I’ll follow her lead. It’s always the big ones for me I have a problem talking to.

2:41 p.m. – Mario Lopez is interviewing Chevy Chase, and we’re just chilling. Oh, it’s Chevy Chase’s birthday today! You would think he would be in a better mood! Lol… 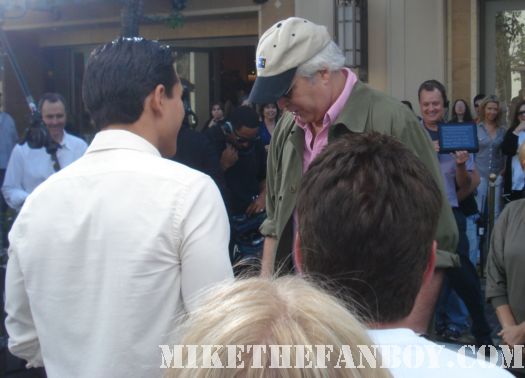 2:48 p.m. – The interview is over. Chevy Chase did not sign… dammit… so he leaves the interview area and we are trying to get to him. Grrr… 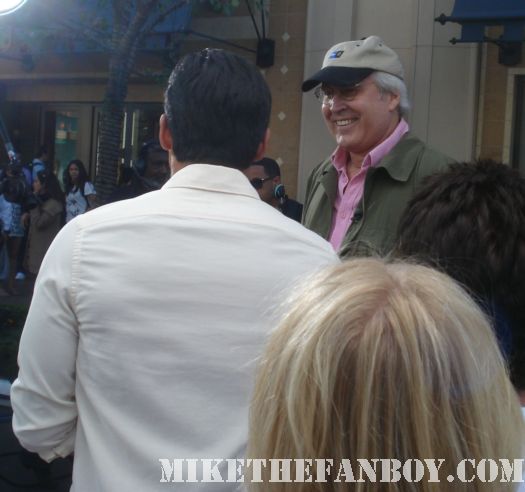 2:51 p.m. – Dude, the security guy who was being a jerk works on the show! And he’s getting Chevy Chase to sign a photo. Now that’s cold. I mean here’s a guy stopping fans from getting something signed and he’s getting his crap done. That pisses me off…

2:53 p.m. – Chevy Chase emerges and my friend gets him to sign one for him. Then I have my Vacation poster out for him and he asks, “Are you two together.” I say, no it’s for me. So he signs the poster and that’s it. He goes inside Nordstrom’s. 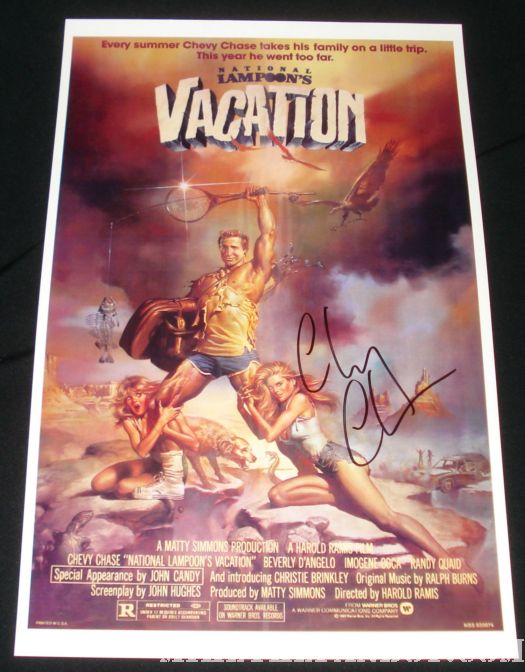 3:01 p.m. – Okay, so Chevy Chase is now getting coffee or lunch or something at a small coffee shop… and… holy crap there’s Olivia Newton John again! She’s going inside the same coffee shop as well…. She’s still flocked by security. What the hell….

3:09 p.m. – Olivia Newton John has just emerged from the coffee shop, and again refuses to sign. Again, it could be the security, but she just won’t do it. (as a side note, the dick of security twittered a picture of himself with Olivia Newton John and him in the green room. It burns me up when security get their power trips and stop fans from getting pictures and autographs when they just walk backstage and do it themselves. Like, don’t be a hypocrite!)

3:11 p.m. – At the valet Olivia Newton John keeps saying, I gotta go, I gotta go… and she’s off… a couple people try to wave the car down but I just say forget about it.

3:22 p.m. – Here’s a bit of randomness we just ran into Gavin Degraw, and he was so cool. We got pictures with him. Lol… Now what a random sighting. 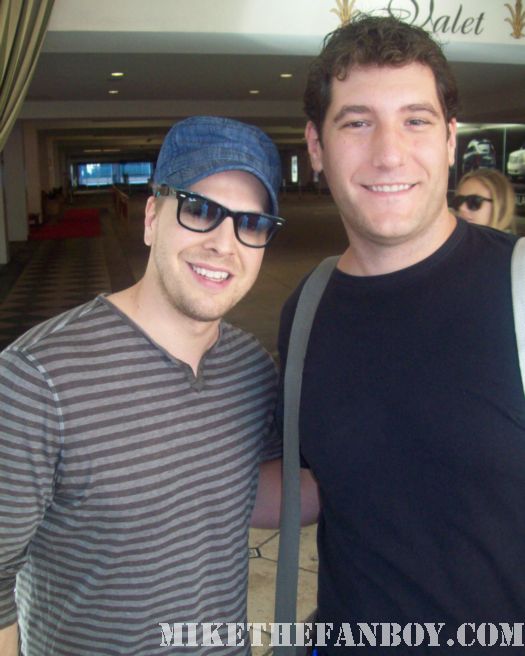 3:49 p.m. – My friend just complained to the security about how they treated us during Olivia Newton John… I mean it was just shitty. 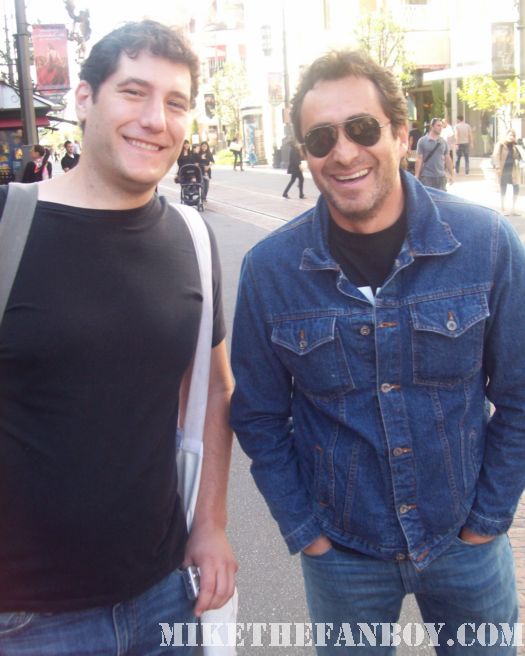 4:02 p.m. – Demián Bichir is super nice, and takes pictures with all of us. It’s killing me I don’t have my Weeds poster for him to sign. KILLING ME! Still a photo is super rad.

4:44 p.m. – Something is stirring… I see Chevy Chase’s pink shirt standing up… its go time people!

4:46 p.m. – We all head over towards the café, and Chevy Chase comes out with his wife. He sees us, and my friend asks for a photo. Chevy Chase kind of grimaces and at the urging of his publicist does… then Pinky asks for one… he says something like, “Another one?” But they get their photos… He says he will sign as he walks….

4:47 p.m. – I got him on my Christmas Vacation mini poster in a red paint pen no less and ask him to personalize it. He laughs, and says, “Yeah right” Oh well… at least it’s done… 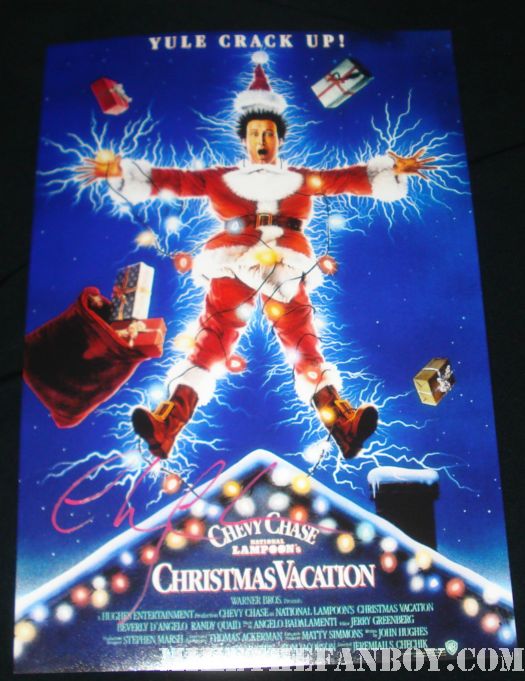 4:50 p.m. – Chevy Chase is now waiting by the valet all by himself… everyone keeps pushing me to go over there… but I’m just like… no… Finally I was like… Fine!

4:51 p.m. – I walk over and this is kind of a blur, but I say something like, “Mr. Chase I’m a huge fan, and I’ve grown up with all your movies, you have no idea what a thrill this is for me….” He said, “No I guess I don’t.” I was like could you please sign this to Mike if you can, “So, he signs my poster, “To Mike if you can best Chevy Chase” he was nice, especially after I started dorking out. Lol… I mean he has such a dry sense of humor so I take it like a joke. He is very nice, and I thank him for signing for me, and my Funny Farm poster looks cool…. So, I’m very happy. I’ll definitely go out for him again… I still need a couple more posters signed, and of course that elusive photo… sigh… lol… until next time! 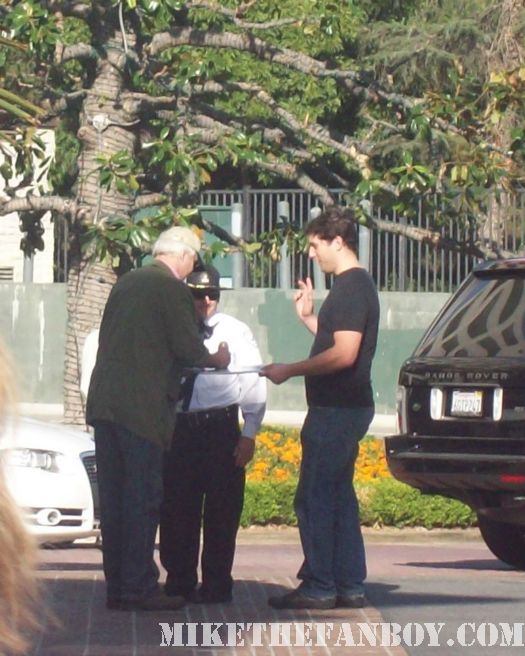 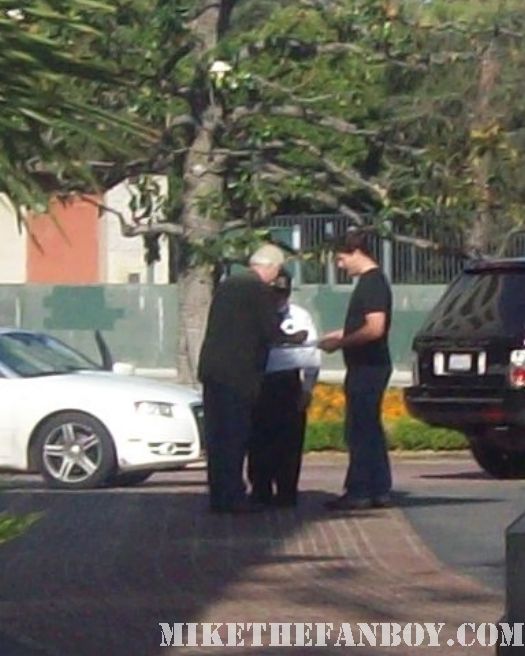 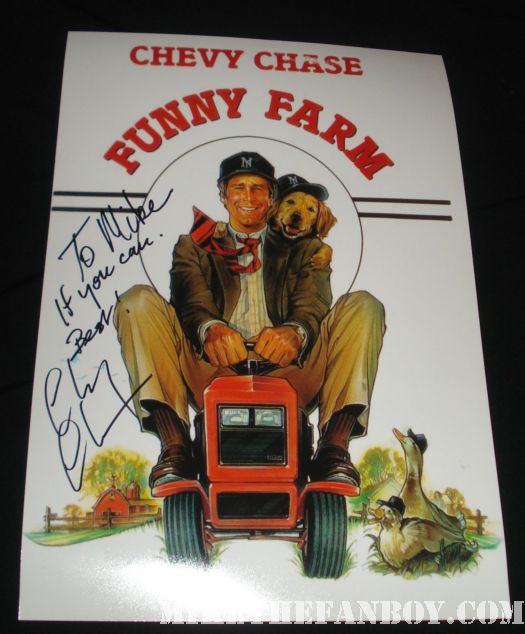