Home / Big Mike • Fanboying! / Big Mike Gets Wood! Well… Elijah Wood! After Years Of Trying! One Ring To Rule Them All! Autographs! And More!

There are just some people that are cool, but you just can’t seem to get. The stars never align, or you always miss them. Such is the case with Big Mike who missed Elijah Wood so many times over the years.

In fact, I kept texting him about appearances and he always missed them. But Finally… Finally… After trying hard and long… Big Mike got wood.

Elijah Wood: An Unexpected Victory Or “Big Mike” gets Wood

Hello kiddies! “Big Mike” on the scene here. As some of you (prolly none) may remember, I’ve been after Elijah Wood for at least two and a half years now.

Could be even more, but let’s not get into that right now. Most of you know him from “The Lord of the Rings” series, which were spectacular films by Peter Jackson. I liked them, but they’ll never replace my love for that first “Star Wars” trilogy. I’ve had this “Sin City” poster I’ve been gathering names on for Lord knows how long. I’ve gotten some pretty cool names on it so far: Jaime King, Michael Madsen, the gorgeous Carla Gugino, Rosario Dawson, Quentin Tarantino, Robert Rodriguez, and Frank Miller to name a few.

I realize I’ll never get that one completed due to the size of the cast, and the size of Bruce Willis’ ego. (Still gonna try for him though.) Anyway, Elijah Wood played Kevin, the silent and deadly cannibalistic serial killer who was one bad muhfuggah. I wanted him on my poster and Kevin figure, which has been in the back of my car for a very very very long time. Elijah has either been one step ahead of me, or some simple misfortune has gotten in the way.

A couple were a little too depressing to write aboot so I left them alone. Tonight would be my fourth attempt in the last twelve months. I got covered by the dealers last June, skipped over at a packed talk-show appearance, missed him at a Q & A, and just missed him at a “Save Henry’s Tacos” rally late last year. That last one really killed me. Our beloved Mike the Fanboy even texted me about Elijah’s possible appearance at that rally and my honey and I chose to go to Universal Studios to check out that Transformers ride, which kicks ass, by the way. For some reason that morning, we decided to take her car and I’m not sure why I didn’t grab my two items from mine. That was a huge mistake. Mike texted me saying Frodo was signing up a storm and I needed to get my ass over there. After rushing home, grabbing my car and hauling ass, I missed the wirey little dude by twenty or so minutes. So bummed.

When I got another text from Fanboy Mike, I was determined not to let this one go by the wayside. Elijah was making another DJ appearance at Amoeba Records over there in the Hollywood. Heloise & the Savoir Faire was having a live set and signing and DJ Jamie Starr was backing up at the turntables. (That’s slang for record players, which are the machines that played your grandparents’ version of CDs.) Apparently, DJ Jamie Starr is an alias of Elijah’s. I wasn’t sure how this was going to work out. I’ve never brought anything into the store before and didn’t want to creep anyone out waiting in parking lot, but I had to try. 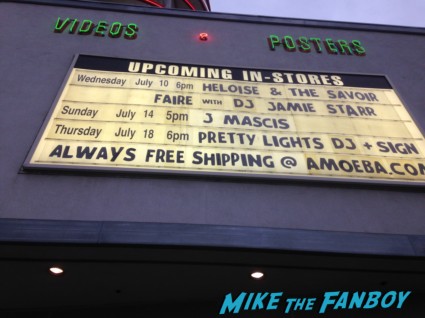 The set started at 6pm which is what time I leave the LA office. With the boss outta town I figured it would be okay to leave early since he doesn’t frequent this site. (Shhh, bitches. Don’t be ruining my game!) I left forty-five minutes early and every car that had a chance to cut me off did so. I knew I shoulda went through the valley on the 101. It only took me an hour and forty-five minutes to get there, which is forty-five minutes more than usual. I had forgotten aboot that part of the journey. I also had to make tinkle aboot halfway there. There was no time to stop though the set wouldn’t last forever. Sure, I could turn into some restaurant parking lot and use their crappy bathroom, but then I would have to get back into traffic and no one lets you in in LA. You have to take it, and no one wants to give an inch in the shitty traffic out here. I try to be a nice guy sometimes and let people turn in, but do they give the courteous wave? No! Those ass-tards just pretend you’re there to serve them and completely ignore you before trying to cut someone off in the next lane so they can get to their asshole elocution lessons and put the burden on everyone else. Give the damn wave, people!!! It’s not hard to do, it’s the right thing to do and does more than you think. So put down your sod grass smoothies and say “thank you” when someone does something nice for you. But I digress.

I got lucky with a parking spot that I passed up on the first swing because it didn’t look like it was legal to park there but it was. (Whew!) So, it took forever to get there and it felt like it had “fail” written all over it. I barely reached the store and I felt like I should turn back, but I didn’t. I had to look. Maybe he was still in there hanging around. It wasn’t that late. I arrived at the front of the store and saw an empty stage in the back. Damn, Heloise was done performing. I knew it! But then, off to the side of the stage, I saw a tiny brown haired little fella wearing headphones. It was Elijah Wood! I’d recognize that little dude anywhere. He was still spinning! Now what? I checked my items in and decided to survey the area where he was dolling out the sounds. There was about less than twenty people left and a small lot had their phones aimed at him recording the experience. I wanted to put up a sign and ask if he’d sign, but that felt a little desperate and I didn’t have anything on me anyway. By the looks of the folks around, I knew I wasn’t the only one who wanted something. There were no dealers that I saw. I was just going to play it by ear and hang by them if I saw any. There must’ve been a premiere that I’ll read about on this very website (mikethefanboy.com) and regret missing. Happens every week.

The crowd was digging Elijah and I sifted through the DVD’s to pass the time and come up with a plan. The plan was easy. Pray he’ll be his normal cool self and sign for all the girls there. My giddiness alone would help me pass for a chubby girl in her twenties. I was there for aboot fifteen minutes until his set ended. The small crowd cheered and Mr. Wood simply stepped off the stage and greeted that fans. As soon as I saw him sign an item it was right back to the bag-check to claim my figure and poster. I grabbed an okay from someone at the store to bring the items to try and get signed as long as it was cool with Elijah and his handler, which I didn’t see. I was off!

Of course, as soon as I was, every slow person in the world decided to walk in front of me aimlessly. I deal with you a-holes enough in real traffic, now you have to follow me into a store and blogpost? I wound up behind an older lady and her granddaughter, I think. Almost all these people were definitely newbies. Everyone seemed hesitant to move when someone was done meeting him. I didn’t want to seem too anxious by telling the ladies to start making their move, so I just went around the aisle to the other side of the small and friendly mob. I could’ve even gone one more aisle and be directly next to Elijah, but I didn’t want to creep him out. I wound up behind a woman and I think her three daughters.

At this point, some dude approached Elijah from the empty aisle I avoided and Elijah was perfectly fine with that. Damn, I could’ve done that and no one would’ve complained. Newbies are so cute when there’s no pressure. Once the mom finally got to him she had her pic taken by the three girls with three separate cameras at the same time. That’s how I should do it from now on. I got my items out and ready to sign once these chicks cleared out. There was no clear order to the “line” so why not? Just in case, I gave the lady whom I was originally behind a chance to go in, but she hesitated and I had to get this goddamn rite of passage over with already. Elijah gave a “who’s next?” look and gesture and it was me, dammit! I glided in and shook his hand and asked him how the hell he was doing. In fact, in my excitement, I asked him twice. This dude was super ultra cool.

I babbled about my two and a half year trek to get him and asked him about his movie “Maniac” where he plays a creepy psychopath and he told me I could find it on Itunes. I presented my “Sin City” items and he was more than happy to sign them. I asked if he was written into the sequel, but he was not. Bummer. He was such a badass beating the crap out of Mickey Rourke’s character in that. I thanked him and made my way to safety where I could put my items away once they were dry. The long wait was finally freakin’ over. The first thing I did was took a picture and texted a “thank you” to Fanboy Mike.

A couple of minutes later I thought aboot going back to try and get a picture but everyone was gone. I don’t know how long my attention was diverted, but it was like he was never there. I’m positive he got to everyone after me and I wish I handed off my phone to someone, but I didn’t want to take any chances and I have no regrets. Victory at last! It tastes awesome, like me in a bottle. Now, does anyone know when George Lucas will be around? I’ve had these two figures I’ve been trying to get signed for at least five years now… 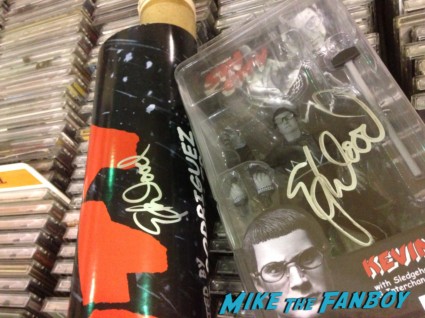